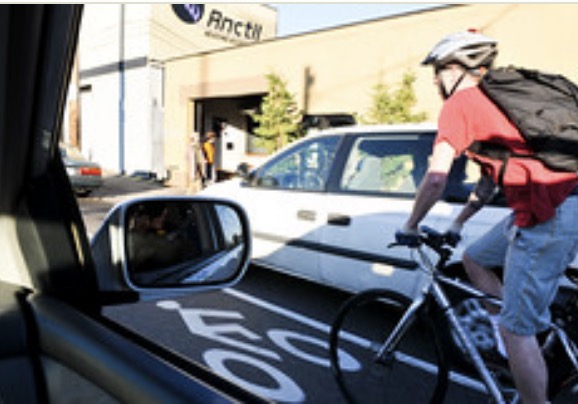 Bike Law 101: Harassment and how to deal with it

(Photo © J. Maus) Having commanded ownership of the road for decades, sharing it is an often unfamiliar and difficult idea for many motor vehicle operators. To now be required to share that space with people on bicycles is for some, rather difficult. Many people honestly believe bicycles don’t have the same legal rights to … Read more

A closer look at how the law dictates where you must ride.(Illustration by Dan Pegoda/Animated Traffic Law Center for BikePortland.org)

Oregon’s careless driving statute applies to multi-use paths too.(Photos © J. Maus) Many of us are aware that a person can be convicted of careless driving (ORS 811.135) for operating their motor vehicle in a manner that “endangers or would be likely to endanger any person or property.” But did you realize that bicycle operators … Read more

Social cycling on N. Willamette Blvd.(Photo © J. Maus) The beauty of a bicycle is that by its very design it lends itself to connecting its operator with other people, be it another person on a bike or anyone else nearby. The technology itself encourages social interaction. I hope it was with this understanding about … Read more

Proper “take the lane” form.(Photos © J. Maus) Many of you already know that you have the legal right to “take the lane” when necessary. What’s less understood is what this actually means, both in practice on the road and in the law. “Take the lane” is a common phrase, almost a rallying cry in … Read more

If it’s there, you should be too.(Photo © J. Maus) If you’re concerned about your personal safety mixing it up with motorized traffic, your fears are not without merit. American roads are made for something powerful, weighty and full of horsepower. Stepping foot or pushing pedal upon them can indeed be daunting. The tendency for … Read more 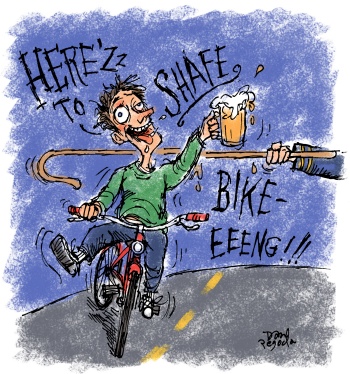 Bike Law 101: Biking under the influence

Although it’s generally understood that it’s not cool to drink and drive, many people don’t think of cycling while in an altered state as being dangerous. But, before you over-indulge, here are some sobering statistics to consider… According to NHTSA, (National Highway Transportation Safety Administration) 28% of all cyclists killed in 2009 had a measurable … Read more

You’re freewheeling along on your bike. There’s been a change in the weather. The day is dry and it’s even warm enough to drop a layer. The ride just couldn’t be better. And then it happens. The approaching school bus has pulled to the curb just ahead. Now, with lights ablaze and its stop sign … Read more

[Publisher’s note: Welcome to Bike Law 101, a new column written for BikePortland by Kurt Jansen. Kurt is the Executive Director of the Animated Traffic Law Center. ATLC is a Eugene, Oregon based non-profit that helps organizations with their traffic law education efforts (the City of Portland hired them to create the “Every Corner is … Read more