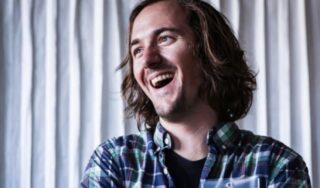 Early Thursday morning, 42-year-old Portland resident Ian Mouser was struck and killed by the driver of a pickup truck while bicycling on a rural highway east of Phoenix, Arizona.

Word of this tragedy has spread quickly through our community. Ian was active in the Unitarian Universalist Church and has worked for many years as a music and voice coach. Ian was the executive director of My Voice Music, a nonprofit he founded in 2008 to help at-risk and underserved youth improve their lives through music. He’s won several awards for his work.

According to a story in the Gila Herald, Ian was riding on Highway 70 just outside the small town of Safford when a man driving a Dodge pickup ran into him. Ian was pronounced dead at the scene. A spokesman for the DPS said, “It’s unlikely criminal charges will be filed, however, the investigation is ongoing.”

Ian is survived by his wife Karen Mouser Darr (who was also on the staff of My Voice Music) and his six-year-old son.

An email from My Voice Music said Ian was, “pursuing his dream of cycling across the United States,” when he was hit. Here’s more from their statement:

“A deeply compassionate and creative person, Ian dedicated his life to using music to heal — touching the lives of over 14,000 young people. Words cannot do justice to this incredible person whose kindness, strength, and vision will continue to be a bright light for so many of us.”

On a GoFundMe campaign page, friends of Ian shared this sentiment: “Let’s honor Ian by showing Karen and Jude our support, however small, and take a moment to remember Ian. He would want us to sing ‘Let It Be’, the song that guided his journey with My Voice Music. He closed most events and classes with a short sing-along of it.

‘And when the night is cloudy there is still a light that shines on me.
Shinin’ until tomorrow, let it be.'”

UPDATE, 10/18: KATU reports on a memorial bike ride for Ian:

There will be a bike ride in Mouser’s honor from My Voice Music, located at 3520 S.E. Yamhill to Laurelhurst Park on Saturday, Oct. 23. It will begin at 6 p.m.

At 6:30 p.m. friends and supporters of Mouser’s work will join the community in singing the Beatles’ “Let It Be” during a candlelight vigil.

RIP Ian. Wonderful photo…lots of joy in that face.

Tragic news. Ian was a very positive influence on my kids. He was one of the people who contributed to Portland being a great city. Such a sad day.

Ian was one of the kindest, most caring people I’ve ever met. I’d encourage everyone with an interest in the healing power of music to learn more about the incredible organization he built from the ground up– http://www.myvoicemusic.org

This is absolutely tragic. As a friend of Ian (and his wife Karen), and supporter of My Voice Music, this just has me gutted. One of my favorite nights of the year was attending the MVM fundraiser gala, which was just such a celebration of life. Hearing from kids facing all sorts of challenges, that were finding confidence and joy via music, was just incredible. And Ian was the driving force (not to mention the fundraiser emcee!) behind the whole project, and put his gigantic heart into it. Such a loss to not only his family, or his friends, but the entire community.

At least the article doesn’t victim blame. But very little facts present, aside from time of day.

This is really sad, I am sorry for everyone who knew Ian.

I heard about this last night and took a look at the roads in that area. High-speed 4-lane roads with no bike lanes or shoulders, and no alternative routes. No good options in this area of the state, it looks like. It’s infuriating that we don’t have consistent federal policy on road design that would make roads like highway 70 in Arizona illegal.

I’ve ridden this route and recall that most of the Arizona leg felt dangerous. Yes, this area has a bit of a shoulder but it is also occupied by a rumble strip. Sadly, the lower traffic, good riding comes after Safford. Not only should state and federal highways not be constructed this way but the Adventure Cycling route uses it and so sends many cyclists on these roads – which makes it more important to fix the problem. My condolences to Ian’s family and friends.

Chris, actually this tragic incident happened on the east side of Safford (I checked with the reporter*). And that highway section section design is a much more driver and touring cyclist ‘friendly’ section: three lanes + paved shoulders all with rumble strips. Though its still a fast rural highway.

*”According to DPS the collision was at milepost 348 near Haekel Road.”

Correction to my earlier post: the section where this incident occurred was a two lanes plus paved shoulders all with rumble strips. (So less friendly than a three lane cross section.)

Thank you Todd for the clarification. I too have ridden this road on my cross country bike ride. It is wide and the sight lines are good. The shoulder is separated from the traffic lanes by a narrow rumble strip. It is smooth and flat. As roads go this is one of the better ones to ride. It is a desolate area and there are practically no lights. My condolences to the family.

RIP, fellow cyclist. I’m sorry that our country’s attitudes about motorized transport have made this activity that we love so dangerous.

I’ll be honest, my mind immediately went there when i saw the story – not in an accusatory fashion in the least…cyclist hit at night triggers memories of “close calls” buried in my brain of cyclists/pedestrians who seemingly came out of nowhere. kind of how our memories are wired.

I have no idea regarding the details of the incident, but f*** rumble strips. IMO they make the cycling experience less safe rather than more so. ODOT has recently been installing them on state and interstate highways in Oregon, and I think they make these roads much less safe for cyclists.

My condolences to the family. The newspaper article said a deputy was dispatched to the scene at 4:20 AM. Thus, it was dark – a possible contributory factor.

As far as riding on roads with rumble strips, they can make cycling safer. For example riding I-84 in the Gorge the shoulder is very wide – 6 to 8 feet? The rumble strips make it less likely a vehicle will cross the white line and hit a cyclist on the shoulder – if they do cross it perhaps the cyclist will hear the rumble and get out of the way. It’s loud riding I-84, but I do like the wide shoulders – only problem is there are many small pieces of wire from worn out tires along the shoulder and they like to cause flat bike tires.

The only thing to go on is that criminal charges will probably not be filed. Wonder what happened. I feel terrible for the family, this guy was a great man who only wanted to help people. RIP.

I used to deliver bakery products in the Safford area and often drove this stretch of road out to Morenci and Duncan along the exact stretch of road the cyclist was run over. I have a couple of questions/observations: It’s a boring stretch of road, nothing to do but hang on to the steering wheel. Did the 27 year old have a cell phone? Any indication he was using it? Was he on the way to work or home from work? Did the cyclist have rear lights on? Was he to the right of the fog line when he was hit? Autos have to stay to the left of the fog line. If a police car is behind you and you go over that line it’s a big tell and you’re likely to get pulled over.
I hope the police are looking a bit deeper into this and not just summing it up with a ‘he’s out in the dark on a bicycle, what did he expect’ conclusion.

Another murderer gets off scot free because the victim is not a Real American. Insane.