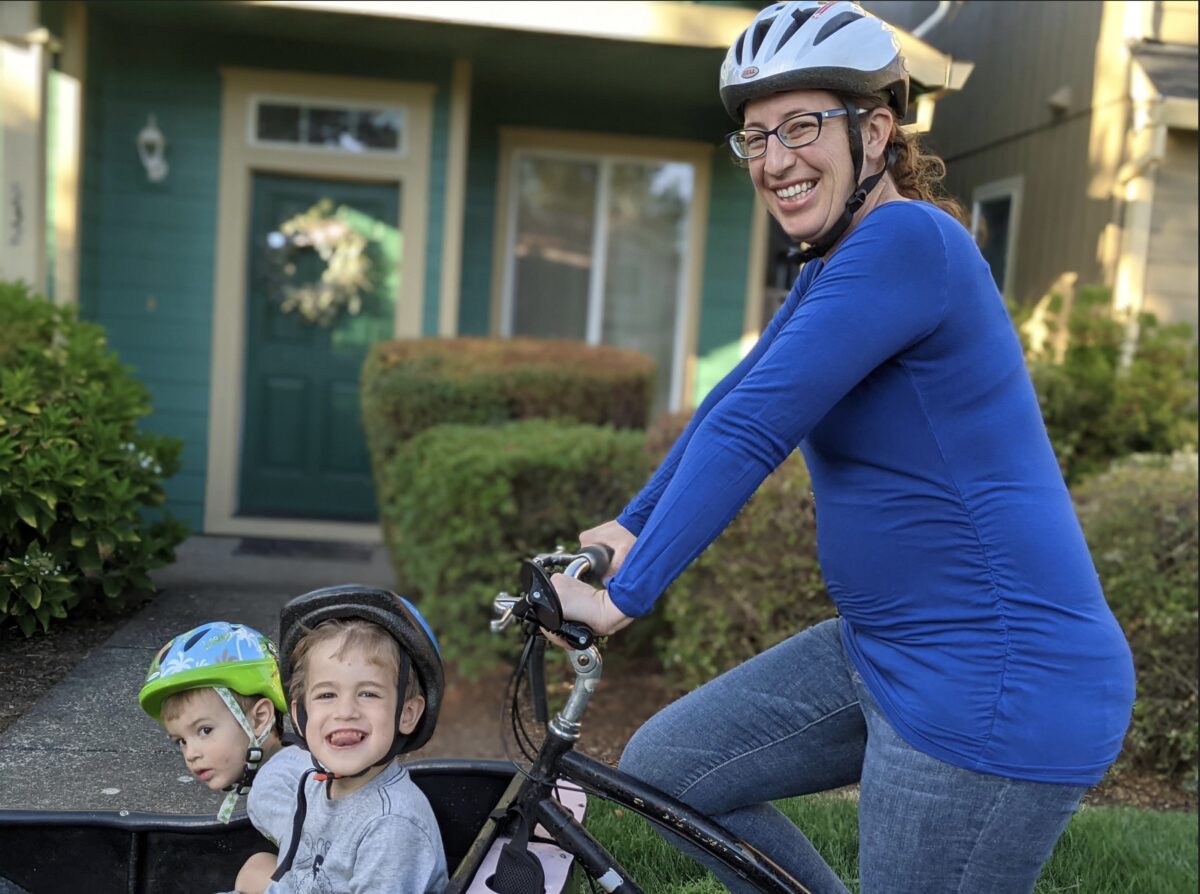 Shannon Johnson, who’s due in December, with two of her kiddos. (Photo: Jacob Johnson)

I was planning to park it. Carve out a place in the back of the garage. Apologize to my husband for wasting the money. And laugh at myself for having such a dumb idea.

I took a giant leap out of the traditional American box and bought my first family cargo bike back in April, on my youngest son’s second birthday, with dreams of biking my kids all over town. Just a few weeks later, I saw those tell-tale blue lines on a pregnancy test. And I immediately thought, “so much for that purchase!” Because I was sure that the start of a pregnancy meant the end of a bike dream.

I assumed pregnancy and biking wouldn’t, couldn’t, shouldn’t go together. And I quickly felt entirely too awful to get off the couch, much less turn a pedal, in those nauseous early weeks. I looked longingly at a few smiling photos I had taken while trying out the new family bike on our first few rides. But I figured that was the end of it, until the new baby turned two.

First of all, I didn’t know if it was safe to ride a bike while pregnant. I remember reading somewhere, back with pregnancy #1, that biking is a forbidden activity for expectant moms. So I hadn’t been on a bike in almost a decade, and I never questioned the presumed prohibition.

Beyond what I had read, when I’m pregnant I usually lack energy to do almost anything, at least at the beginning. Which leads me to believe that my life is over, that I will never have any energy ever again, I’ll probably feel nauseous for the rest of my life, and I’d really just like to go to sleep and wake up in 9 months — preferably after the whole birth drama is over.

Not exactly the attitude needed for taking up a new family biking habit.

So that was it. I was planning to park it. Carve out a place in the back of the garage. Apologize to my husband for wasting the money. And laugh at myself for having such a dumb idea.

But then, some magical things happened. The nausea receded and I began to entertain the idea that my life wasn’t over after all. My husband gently asked, “Why can’t you bike while pregnant?” And then I became a supporter of BikePortland and was asked to try writing this column.

That did it. I was back on the bike.

Because my biggest obstacles to biking while pregnant were not actually physical health concerns, or even physical symptoms and limitations, real as those are. My biggest obstacles were in my mind. Pregnancy just gave more volume to those screaming demons that say, “You can’t do it!” “You’re not strong enough.” “You’re too old/fat/out-of-shape.” “You’ll look ridiculous on a bicycle.” “You can’t start riding a bike now, under these circumstances.” “You should sit back down.”

Getting back on the bike while pregnant has been the best way for me to silence those voices. Yes, I’m pregnant. I’m not dead. I’m not incompetent. I may have physical limitations and challenges, but I can embrace and pursue what I am capable of during this season of my life. And it turns out, I am capable of a lot more than those demon voices would permit me to believe.

But just one voice suggested I could do this, and that shut up all those others that had been convincing me to keep sitting on the couch, waiting for nine months to pass, or for my kids to grow up.

And even for non-parents, there are plenty of life circumstances and mental demons that say, “Give up!” Aging. Illness. Injury and disability. Job loss. Heartbreak.

— Shannon Johnson, shannon4bikeportland@gmail.com
— Get our headlines delivered to your inbox.
— Support this independent community media outlet with a one-time contribution or monthly subscription.

Shannon is a 36-year-old mom of four (soon to be five!) who lives in downtown Hillsboro. Her column appears every Wednesday. Contact her via shannon4bikeportland@gmail.com

I still remember fondly my wife yelling at me during a ride on Sunriver’s MUP, “How much fucking further!?” She was 8 mos pregnant, I was scared for my life.

I’m 31 weeks pregnant and have been biking all the way through. It feels so important to be continue being mobile and to move in the way my bike lets me. I’ve slowed down a bit, but am grateful that so far my balance seems just as good as ever (though the occasional baby foot in the ribs/bladder isn’t exactly welcome).

That’s awesome! Congratulations on your pregnancy, and I am so glad you have been able to enjoy biking thus far. Being a newer rider, I doubt I’ll still be biking at 31 weeks, but I am just taking it slowly, one day at a time. And so far, it feels great.

My wife was ridding her bike until just a few days before our son was born. She said it was more comfortable than walking! We did need to raise her handle bar considerably to fix the belly/thigh interference.

Speaking as someone who will likely never get pregnant, due to incomparable gonads I arrived with, I’d be surprised if there was any substance to that thought? Is cycling contraindicated while pregnant? I can see how the idea would be based on various factors. Overall though, my understanding of things is, being active while pregnant is good! So, I’m very curious what the science says.

And good for you for challenging your inner voice. Often times that is all any of us needs to get out for a ride, just overcome that inner voice.

To my understanding, the main concern with pregnant biking is the “fall risk” and risk of “abdominal trauma” in the case of a fall/crash. Obviously, the level of risk changes a lot with a rider’s experience and the type of riding, and such risk assessments are very personal choices. Another concern is that a big baby belly affects balance, which increases the likelihood of falling/tipping over. (In my case, I’ve noticed that I need to ride a bit bow-legged or my knees start to crash into my protruding belly. I imagine this could be uncomfortable for my knees if I was riding for a long distance, but I am going slowly on short, flat rides. I am also using a bike and saddle that allow me to ride in an upright position, which seems to be better for accommodating a baby belly.) In any case, every pregnancy and person is different, and the expecting are always encouraged to listen to their bodies and talk with their doctors, to make the best pregnancy/biking/exercise/transportation choices for their individual circumstances.