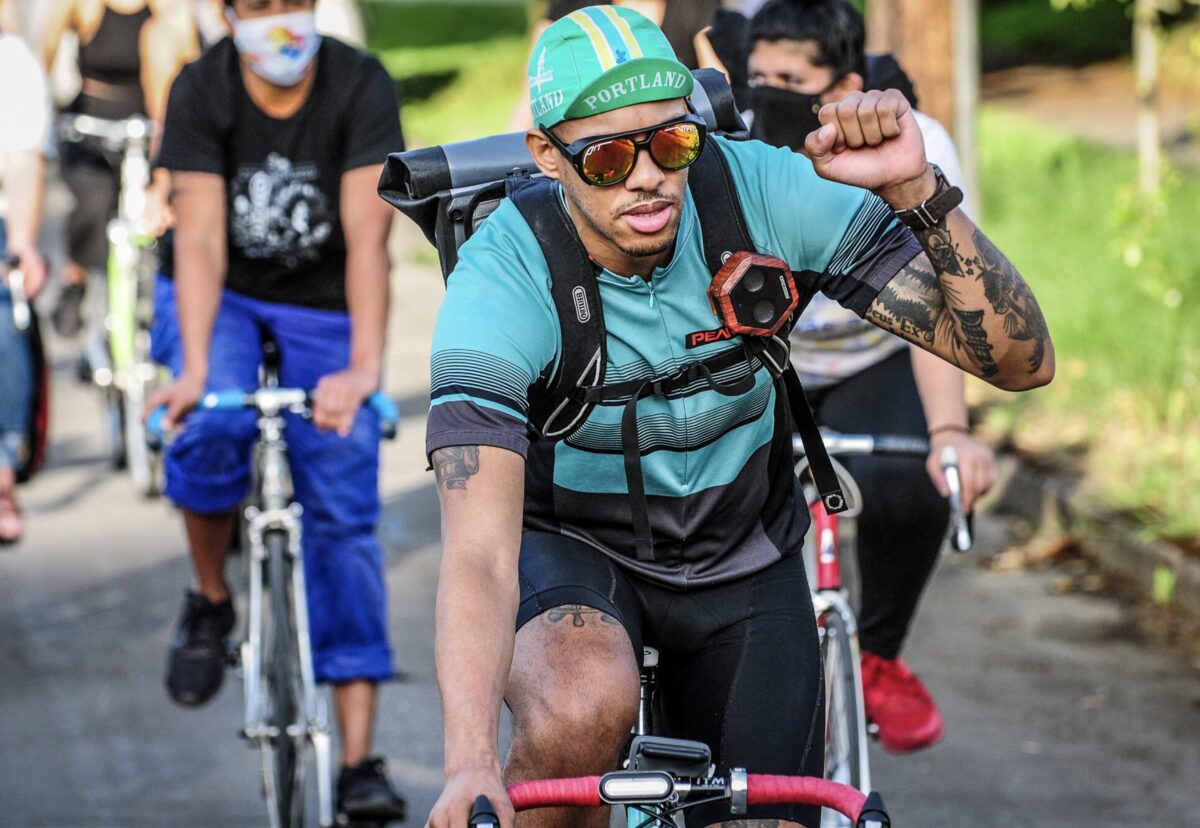 Stephen Marea is working to create welcoming rides and spaces for Black Portlanders. He co-organized the Black Liberation Ride (with Jené Etheridge) last year and will be the leader of Saturday’s ride as well. He’s also just launched a new weekly series of rides for beginners.

I caught up with Stephen to learn more about his work. (Edited for clarity and brevity.)

“It does feel very different. I think there is not the same enthusiasm as last year. Last year by the time of the ride we wound up having like over 700 people RSVP on Facebook, which was a huge thing. This morning I checked in and the RSVPs are at 39. It’s definitely a different energy. But I think ther are a couple of factors… Now that people are mostly vaccinated, there are lots of other events. The day is packed from the morning until the evening, so I know that’s kind of splitting the people that would normally come. They’re just busy. It’s also kind of like, out of the news cycle. Last year, unfortunately, with all the tragedies that were happening, the Juneteenth bike ride was there at a perfect time for people to be able to put their focus on it. So now it’s kind of almost back to normal.”

Can you give me a sense of how — or if — things have changed for you as a Black man riding a bike in Portland since that big watershed moment of the protests last summer? Has it felt any different? Do you feel that you’re seeing more people that look like you on bikes?

“I think, in the overarching umbrella of BIPOC riders, that there are more BIPOC out on the roads. But being like, a Black guy on a bike, I don’t think that anything has really changed for me and how I feel about riding around Portland. It still feels pretty hostile. I still have to deal with the same kind of weird energy in intersections, where I’m like, in a crosswalk and people are just like, ‘Even though I’m approaching a red light, I’m still just gonna drive past you and you’re halfway through a crosswalk.’ So those things have not really changed at all.

Why is the Black Liberation Ride such an important event for you to organize?

“I just wanted to keep the tradition going. It’s really hard to restart something rather than just keep something going. And the motivation was the families that were happy on the ride last year. I think that overall with all of the new BIPOC cycling opportunities that exist, none of them have been family-oriented rides. They’ve been more road rides or adventure rides — which I don’t think most casual riders want to want to do. So that’s kind of the origin of the BIPOC Beginner Series I came up with. That was trying to get that same group of people more comfortable just being out on their own. There isn’t another event that exists like that. And I know that last year, people had a great time with their families, riding with their kids, and I didn’t want people to not have that opportunity.”

“I’m trying to protect this space for folks who normally are super intimidated by cycling…the people who normally would not come out, would come out now, just to be on a bike.”

Share with us a bit more about your BIPOC Beginner Series or “3B Series” as you call it.

“The 3B Series is about getting people more comfortable on the roads. Last year when the Black Liberation Ride happened, I was like, ‘Dang there should really be more rides like this!’ And it just took me a full year to try to try to create something.

Something I realized I was not good at [when I started riding here] was navigating different neighborhood greenways; because they’re everywhere in Portland, but they’re not connected very well. I’ve been riding thousands of miles around Portland, but I will still take the same route all the time because I know a road is is easier. So even if it’s an extra three miles, I’m just gonna’ take a road that I know is easy to ride on. So, I wanted to showcase neighborhood greenways so people felt confident riding in different areas, especially for people new to the city.

I’ve seen people riding down Martin Luther King Jr. Boulevard. I’ve seen people who ride down Division, not knowing they can ride on Lincoln or Clinton. I see people riding down Alberta when it doesn’t seem like they know there’s Going Street just two blocks over. I’ve had a lot of people talk about how they feel nervous around cars, especially when they’re new to riding. And there isn’t a great map that I’ve been able to find, that makes it easy to navigate around the city. So I’m just taking a different park to start from each ride and just riding through the greenways and keeping the routes to about five miles with minimal hills. The idea is to empower people out on their bike and make it a non-intimidating space where the pace is, super slow and as casual as possible. I’ve been having some music playing. So far the last two weeks went really well.”

Saturday’s ride says it’s only “for Black riders and POC allies”. Does that mean if I’m white and I think of myself as an ally, that I can show up? Can you clarify who you want to be there?

“Yes it’s still a whole BIPOC event. I think what is kind of getting like lost, is that it’s a celebration of Juneteenth. So it’s a celebration of a Black holiday. The focus is Black people and Black joy, so it’s not just like a BIPOC bike ride — it’s a bike ride focusing on the Black community, And I didn’t want to lose that emphasis. So if you are BIPOC and you want to support the local Black community, please come out. But just keep that in mind that it’s not just like a generic Pedalpalooza event, it’s national day of significance for a lot of people.”

A-ha. I misread “POC allies” as meaning it would be OK if well-meaning white people showed up; but you’re saying the only non-Black people you’d like to see are other people of color (who don’t identify as Black), right?

“Yeah OK I see how that could be seen as what I was saying… It’s sometimes disappointing to me when folks are like, ‘Well, why can’t I come?’ But you have so many other rides, and I’m trying to protect this space for folks who normally are super intimidated by cycling*. Last year, I got to see some of the BLM rides and there were so many people. But also, it was like a sprinkling of brown faces in a sea of white people supporting the cause.

…overall, the whole Pedalpalooza calendar is primarily, mostly just white rides, and there are Black people sprinkled in the crowd. For me, none of the Pedalpalooza rides I want to really be a part of because I know that I’m just going to be by myself. If I want to be by myself, I’d rather just go on a ride on my own. So this is one of the few spaces that certain members of the Portland community that still want to ride would feel comfortable in. There are also like WTFNB [Women Trans Femme Non Binary] rides and those are also spaces where people normally would not feel comfortable riding in a group around other people, and they kind of like to be around each other. So this is the same general idea: The people who normally would not come out, would come out now, just to be on a bike.”

Is there anything else you want people to know about your rides and the work you are doing?

“As a Black rider on the roads, I still don’t feel extremely welcome. And that’s why I’m trying to organize a bit more because I feel like a lot of events are not really that welcoming of a space for Black riders in general. The intimidation is still there and I feel like there’s a lot of work to do… sometimes BIPOC events still don’t feel like welcoming spaces, which is something that is a newer challenge that people haven’t really had time to process yet.

I think it’s going to take a lot more time and more work than I originally thought it was going to be. I thought after last year it would be like a snap of the fingers and everyone’s going to be out riding. It’s going to be more challenging, so I’m embracing that it’s going to be a slower process and that there are going to be a lot of nuances in there. I’m just learning a lot and talking to a lot of community members and trying to address whatever their concerns or needs are.”

Thanks for the chat Stephen. Good luck on your rides!

*If white people want to support the ride, Stephen suggests donations to the the Portland-based Black Resilience Fund.

Fantastic work Stephen! And thanks Jonathan for featuring this work and the ride.

“I don’t think that anything has really changed for me and how I feel about riding around Portland. It still feels pretty hostile. I still have to deal with the same kind of weird energy in intersections, where I’m like, in a crosswalk and people are just like, ‘Even though I’m approaching a red light, I’m still just gonna drive past you and you’re halfway through a crosswalk.’ So those things have not really changed at all.”

I’m 1/2 Filipina (1/2 white) and can totally relate to the crosswalk thing.

Thank you Steven and all ride participants. Portland is a better space because of you!