Here’s some good news on a little thing we care a lot about: The power of words.

For many years here on BikePortland we’ve practiced what we preach about not using mode labels. That is, we don’t use “cyclist,” “motorist” and so on* because they put labels first instead of people. (*I’ve very recently started using “pedestrian” again in certain contexts — the idea is to be sensitive about word choice, not adhere to rigid rules.)

I’m very happy to see that the Oregon Department of Transportation has seen the light. Their brand new Oregon Bicycling Manual — a 40-page booklet offered online and at DMVs and educational events statewide — has all but ditched these harmful and inaccurate labels in favor of more descriptive and productive ones.

The title itself is new: It’s now a “bicycling” manual, not a “bicyclist” manual. This small change turns the focus toward the activity instead of a personality type. Bicycling and the people who do it already suffer enough from false narratives and irrational anger from many people. The more we can remind folks that bicycle users are people and not “those cyclists”, the better.

The idea of using “people-first” language is something that first gained prominence in the disability rights world and has caught on in bicycling and other transportation advocacy spheres in recent years. Wikipedia describes it as language that, “puts a person before a diagnosis, describing what a person ‘has’ rather than asserting what a person ‘is’… Person-first language can also be more generally applied to any group that would otherwise be defined or mentally categorized by a condition or trait.”

Or in the wise words of Seattle Bike Blog founder Tom Fucoloro, who declared in a 2015 post “I’m not a cyclist”:

“By conflating a person’s chosen transportation mode at a particular moment with their personal identity, it becomes shockingly easy think about people as members of warring tribes in conflict, battling for space (cue car horn honking and “cyclist” flipping the bird). The idea of a “war on cars” suddenly makes sense to a lot of people because they see their car lanes being turned into bike lanes for others. The safety and comfort of real living and breathing and loving people getting around on foot and bike has been dropped from the conversation.

But if you think of everyone on the street as a person, discussions go in a very different direction. Because we all want our friends, neighbors, co-workers and family members to get around town safely whether they choose to drive, bike or walk. I don’t love my mom any less when she’s driving than when she’s walking.”

On that note, ODOT carries the people-first language through the manual by using “people bicycling” and “people who are driving cars” instead of “bicyclists” and “motorists”.

It’s also worth noting the huge upgrade in cover photo from previous versions! 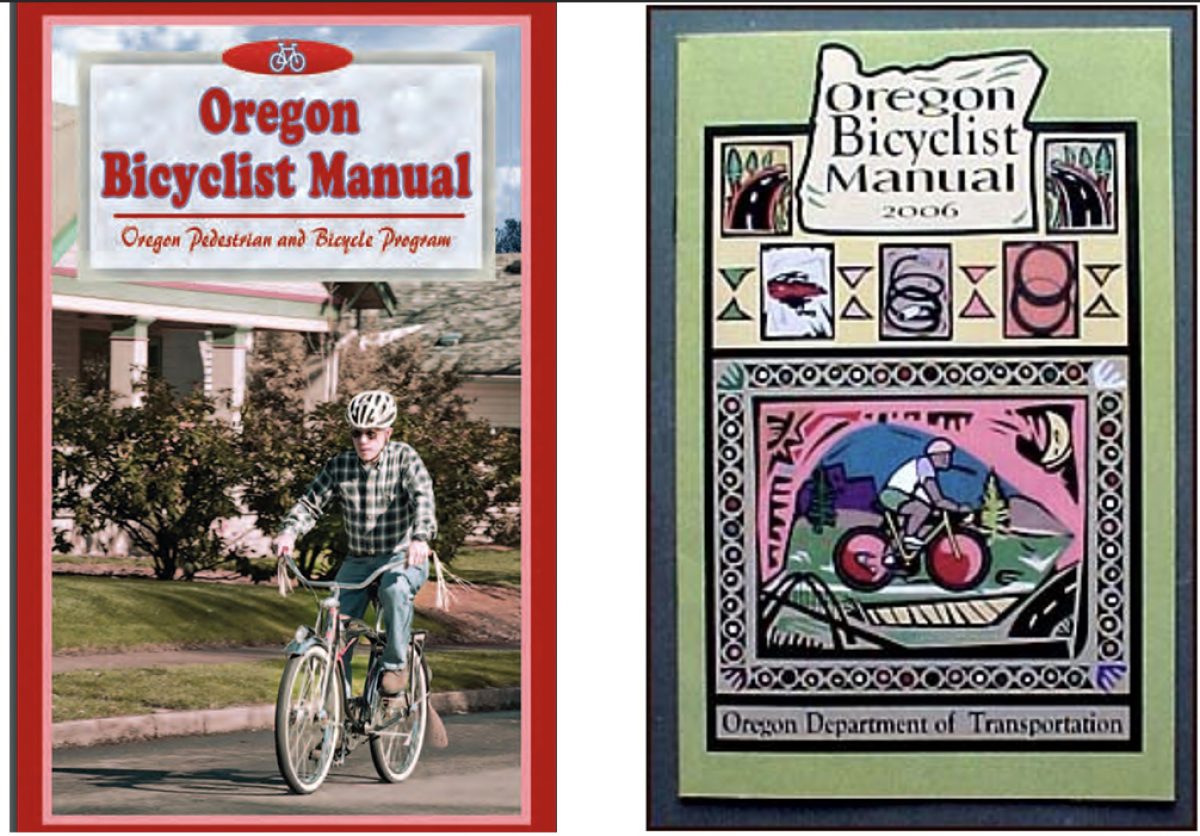 This is a small but important shift. Thanks ODOT!

Overall I think this is a good move. By and large I think of biking as something I do rather than who I am, though at times I will identify as a “bicyclist” when it seems convenient or appropriate. (Mostly I prefer the term “bike funnist” though ) We all live multi-modal lives to some extent, however much our personal mode splits may vary.

Side note: Although person-first language originated from disability rights, I think it’s also important to acknowledge that person-first language is not universally accepted or preferred in disability communities. Some people prefer person-first terms like “people with disabilities,” and some prefer identity-first terms like Deaf (with a capital D) or autistic. As always, it’s important to learn about the differences from the people who are most affected, respect individual choice, and honor how people refer to themselves.

I have mixed feelings about person-first language in technical transportation doc, mostly because I find it clunky and I find that it makes sentences longer in a field where brevity and clear communication are important. I am unconvinced that it makes a difference in reader/listener perception in these kinds of contexts, though I am happy to revise my opinion if research gives decisive answers here. And I’m uncomfortable with transposing the arguments for person-first language in the disability world with the same in the transportation world. Bicycling isn’t a disability, and the potentially dehumanizing effects of referring to a person as their diagnosis (ie schizophrenic vs person with schizophrenia) don’t seem to me to apply when you refer to someone as a bicylcist, pedestrian, or driver, vs person biking, person walking, or person driving. (Again, clunky!, and for no clear gain).

What I AM in favor of is focusing much, much more on framing. Why are streets important to people? How do they feature in our daily lives and decisions? How might a neighborhood gain from a transportation project? When you frame in these larger ways, it becomes natural to start writing about the people in your neighborhood that go for bike rides, rather than generic cyclists, and conversely, you can use people-first language in writing that is still technical, terse, and uninspiring (I see this in transportation writing every day). I think the focus on people-first language misses the forest for the trees a bit. But this framing language is important for long-form speech and writing more than for technical documents and manuals.

Bicycling isn’t a disability, and the potentially dehumanizing effects of referring to a person as their diagnosis (ie schizophrenic vs person with schizophrenia) don’t seem to me to apply when you refer to someone as a bicylcist, pedestrian, or driver, vs person biking, person walking, or person driving.

By that, did you mean to suggest nobody dehumanizes “bicyclists” in some way or another? To me, your sentence is analogous to someone claiming something isn’t a problem because it isn’t as much a problem as is something else.

I’m saying it makes me uncomfortable to compare the experiences of disabled people–who have no choice in their disability and experience a lot of descrimination and hardship, to a mode choice. I love biking, and think there are tons of benefits to society, but we also need to have some perspective.

Thanks for answering. I wonder if you didn’t quite respond as you intended, because as far as I can tell, the article doesn’t compare disabled people’s experiences to a mode choice, nor even to the experiences of people who choose any particular mode(s). What specific perspective do you believe anybody lacks and therefore needs?

Is there a way to order the manual in print version? It would be great to hand one out to new eBike riders.

Middle of page ii, “The online version of this manual, in English or Spanish, is available for download or order at: http://www.oregonwalkbike.org under “Publications.” Additional copies of this manual are also available at your local DMV office. For parents and others teaching children safe riding habits, ODOT publishes a variety of booklets and activity sheets for children that can be downloaded or ordered online at: http://www.oregonwalkbike.org under “Publications.””

We should have paper copies of the English version back from the printer and available to order early next week…just in time for Bike Month! Just use the order form on http://www.oregonwalkbike.org under Publications. Updated Spanish translation is currently in the works and will be available this summer.

Like others I have mixed feelings about new language choices.
As James Carville recently spoke about, the choice of more woke language can cause some audiences to shutdown and not listen to the message. Especially in documents for the public it is more important to get the technical points across than to use the more academically correct wording.

Notice I mentioned that I don’t believe in hard/fast rules about these word choices (some I do, about gender and race… but I’m more flexible when it comes to modes). Like a lot of things, this is about using discretion and being a respectful person who cares as much about impacts of words as how easy/hard they are to write or fit in a sentence.

I’ve been doing this for a long time and I have absolutely zero doubt that using people-first language isn’t a trend or about trying to be “woke” or whatever you want to call it. It just about being accurate and respectful of people and who they are. And it’s far from performative. It definitely makes a tangible difference in how people think and act. I’d suggest looking up research by Tara Goddard on the topic.

It’s important that a focus on the people involved not create a false equivalence, which we cyclists know to be truly false when a 6000-lb motor vehicle, driven by a person, is bearing down on us.

Did you refer to a specific case where JM wrote “A bicycle rider collided with a car driver.”? Seems to me you’ve raised a strawman.

This is a good change; language does matter. My wife and I were just discussing yesterday the difference between an academic “contest” where participants “earn a reward” for attaining a particular level of achievement, vs. “win a prize” for doing better than other participants. For anti-competition types, one sounds a lot better than the other.

So now that “bicyclists” know what they already knew, when will language and framing changes make it into the Oregon Driver’s Manual? You know, for “them”?

First of all I love the cover, for the first time ODOT and the OBPAC place a handcycles front and center. Fantastic steps to an accessible inclusive multi modal community. Words in transportation are confusing, would you believe that more people are interested in equity and accessibility for the freight department then the accessibility for the disabilities department.
Knowledge is power and powerful, for the community who likes to word smith words like inclusion and accessibility for people with disabilities. People with disabilities using adaptive mobility devices.
What words would you use to describe a family member who is in a wheelchair type of devices because of health issues.
Technical writing in the transportation and engineering field is the problem. Working words to find a solution is not the same working the design process for a accessible inclusive solution.
It to easy for department heads to find the answer to accessible access in a Lyft bus .transportation engineers designing a simple bike lane with ADA accessibility requirements for the public should have started years ago.
But wording in the ADA made many think that the wheelchair was the only mobility device to include.
The ADA is a mindset that must be the first consideration in everything that moves people.
ADA requirements must have front and center the first requirement when a project starts is how to move adaptive mobility devices, the rest is easy.
Engineering firms that work with ODOT should have a accessibility education system process. Maybe ODOT too should require everyone to spend a week in a wheelchair. Live the life of someone who can’t walk, go shopping, go get coffee in town, then rent an adaptive mobility device your choice and use it. Everyone every year part of the certification process.

Civil rights and the bike bill and the ADA have been around for years. The problem is hung up with words.
It’s the transportation engineering that handicaps people with disabilities! It’s engineering that has a problem with how the make the words flow in a sentence.
I would think that if you have an accessible inclusive multi modal project writing about it would be easy.
Ya learn something everyday.