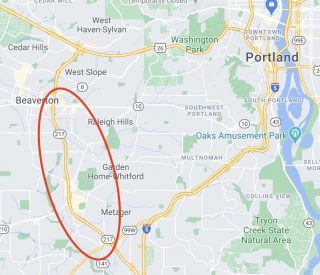 The Oregon Department of Transportation kicked of an online open house today for the OR 217 Auxiliary Lanes Project. With so much attention on their other urban freeway widening project in Portland, we haven’t paid as much attention to this one even though it’s happening just on the other side of the hill in Washington County.

Similar to their rationale for the I-5 Rose Quarter project, ODOT says more lanes are needed because closely-spaced ramps are causing congestion and crashes. ODOT plans to add a new southbound lane from Beaverton-Hillsdale Highway to OR-99W (about four miles). In the northbound direction they want to add two new lanes between 99W and Scholls Ferry Road. The project would also add a new road on the west side of Hwy 217 between SW Allen Blvd and SW Denney Road (and remove the ramps that serve those streets), replace a Hall Blvd overpass at Pfaffle St/99W, build new sound walls, and widen two existing ramps.

The project will make it much easier and more convenient to drive a single-occupancy car through a destination-rich part of Tigard and Beaverton while investing nothing in mass transit and a mere pittance for bicycling.

Here’s the pitch from ODOT:

OR 217 between Beaverton and Tigard has 10 interchanges in just over seven miles and some of the shortest merging spacing in the region. The interchange spacing, combined with 120,000 vehicles a day, leads to high crash rates and travel delays. The interchanges at Allen Boulevard and Denney Road are some of the worst bottleneck locations. This project will help minimize bottlenecks and help everyone on OR 217 get where they need to go. 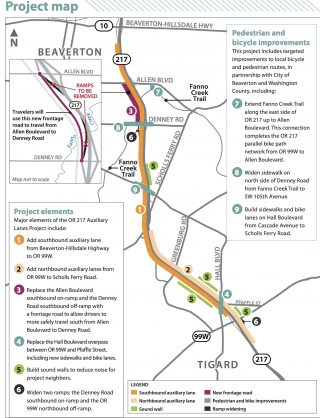 On the non-driving side of things, ODOT plans to work with the cities of Beaverton and Tigard to build an extension of the Fanno Creek Trail along the east side of 217 up to Allen Blvd, widen a sidewalk on the north side of Denney Rd from Fanno Creek Trail to SW 105th and build sidewalks and bike lanes on a Hall Blvd overpass from Cascade Ave to Scholls Ferry Rd.

Here are the before/afters of these “bike and pedestrian improvements”: 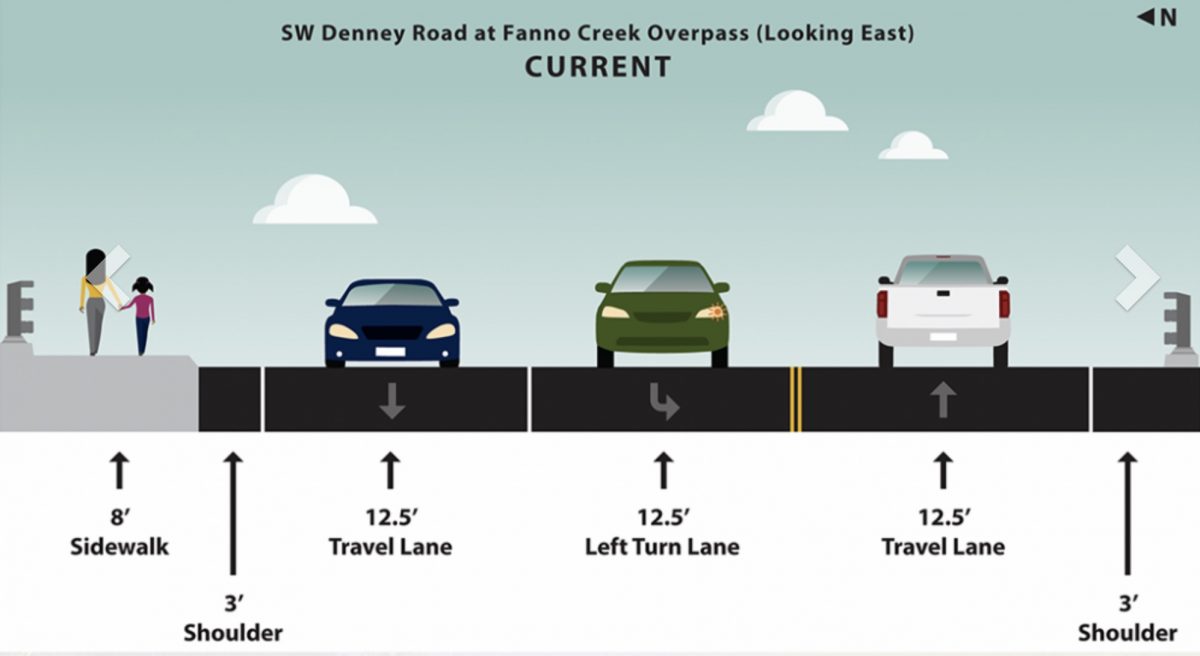 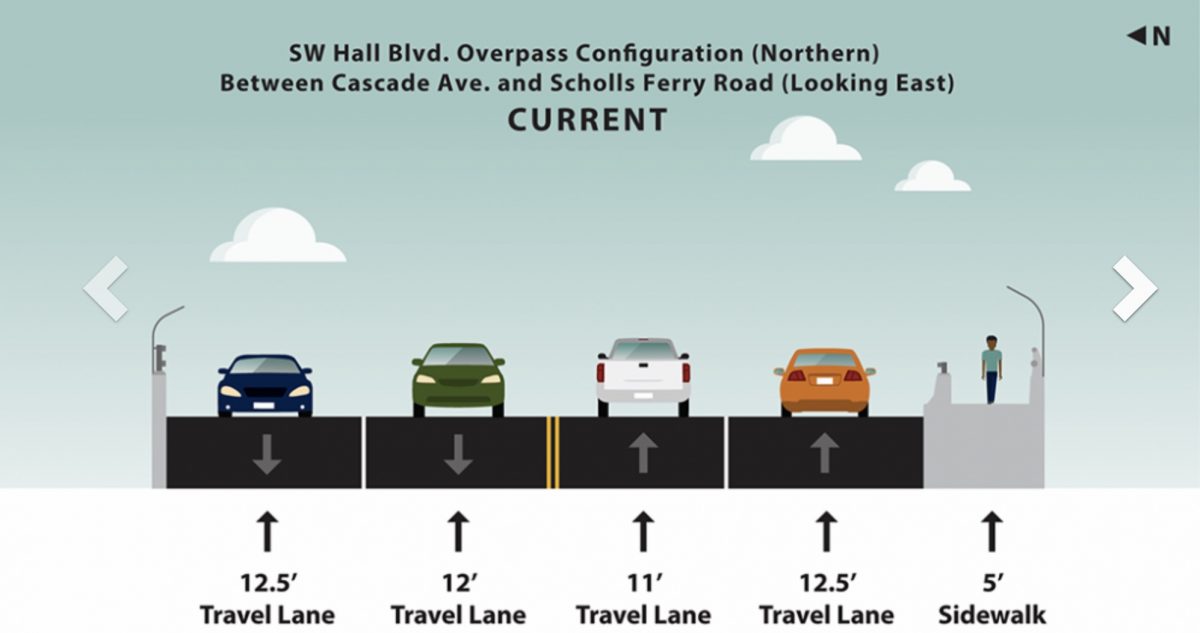 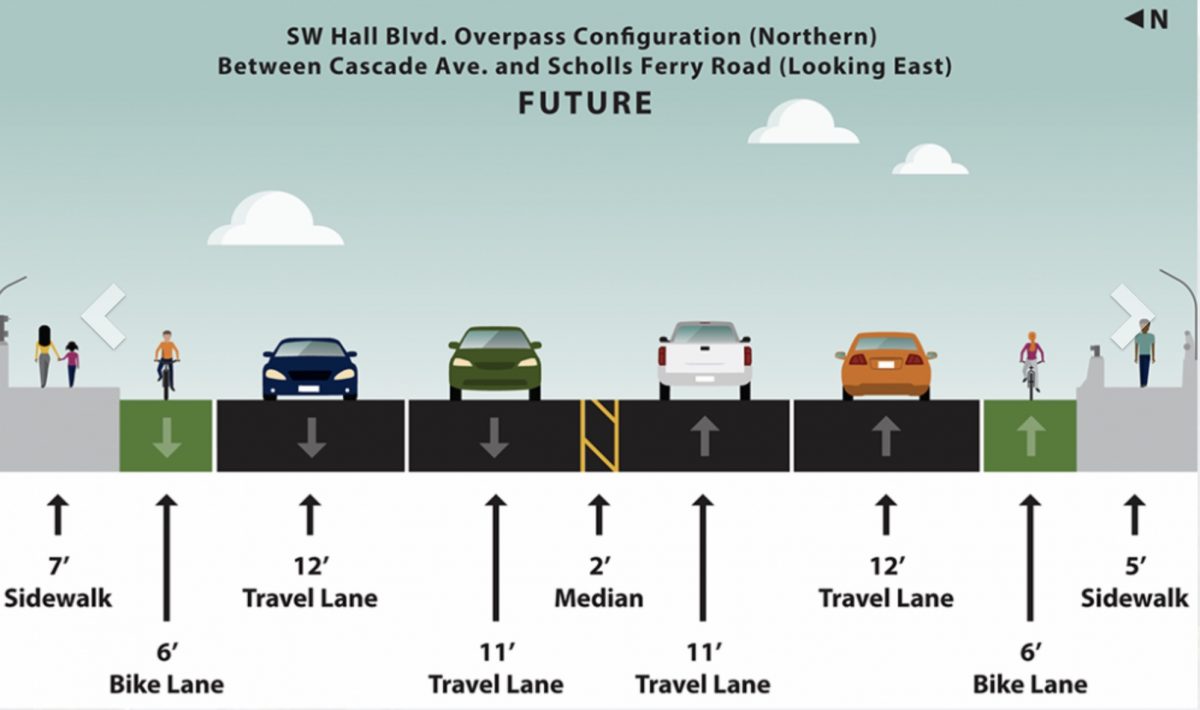 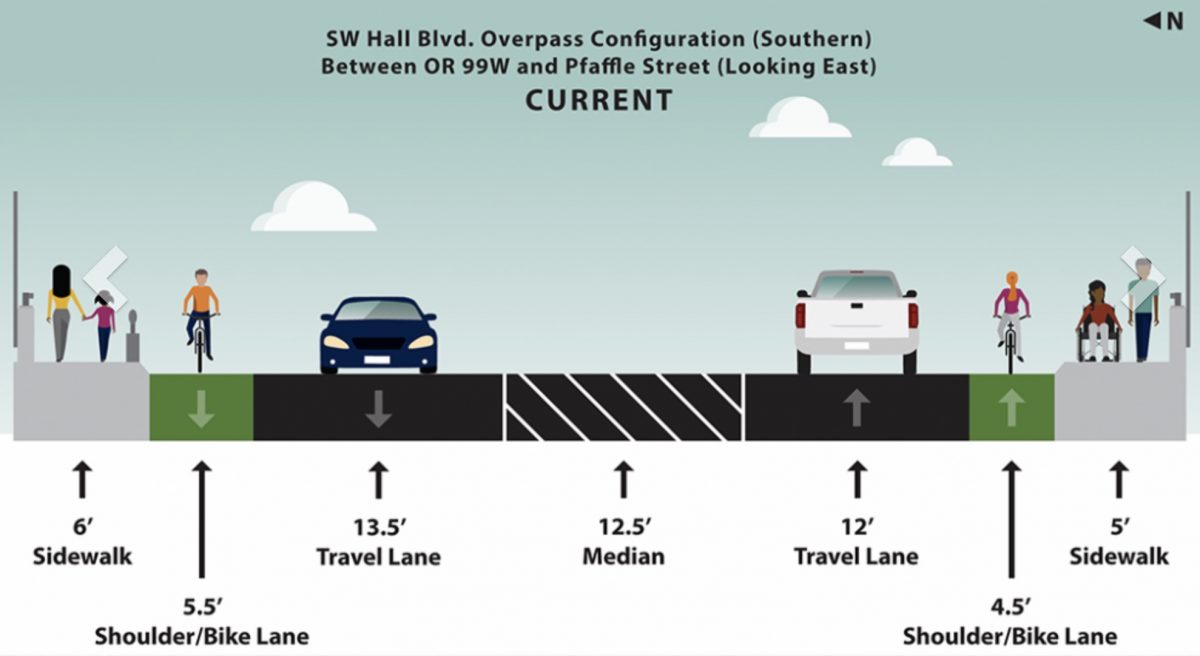 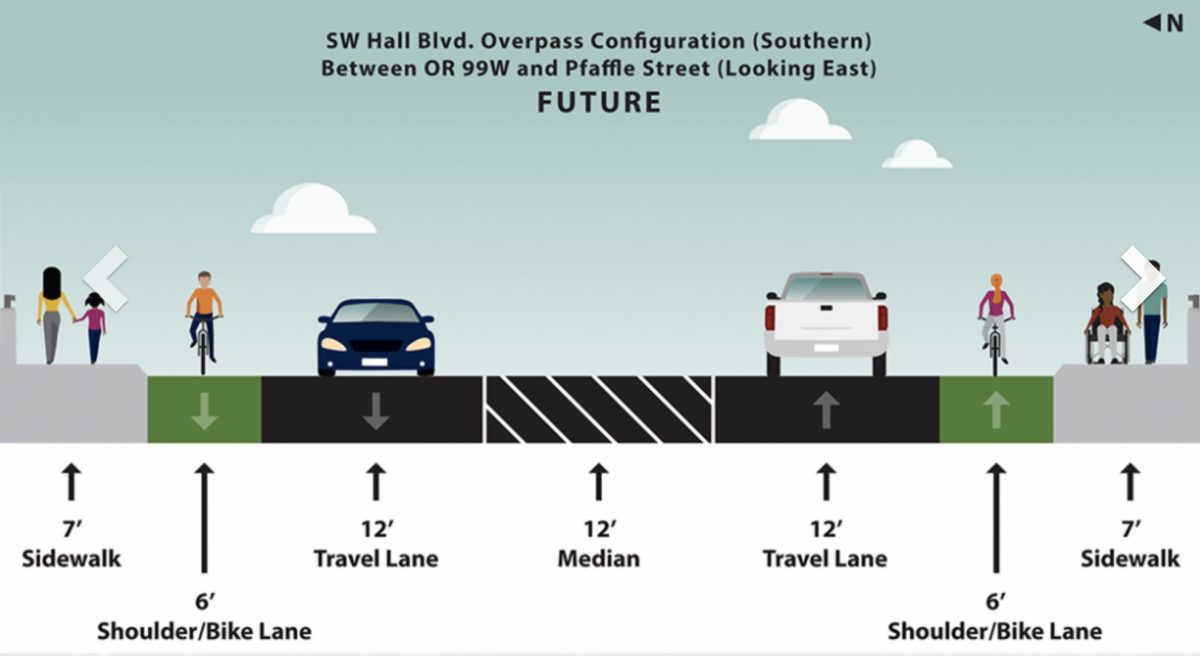 The project is estimated to cost $134 million. It was one of several freeway expansion projects earmarked in the “Keep Oregon Moving” bill that passed the Oregon Legislature in 2017. ODOT expects to complete design by spring of 2021, begin construction in 2022 and cut the ribbon in 2025.

So let’s get this straight, we had to pass the big ballot measure to get sidewalks, but this freeway expansion was funded straight up by the legislature? Where’s the fairness in that?

There’s also an I-205 expansion project in East Portland.

They already added lots of lanes and made it harder for lawful drivers to get on the freeway. It was bad enough already if you knew the laws, forcing you to illegally merge onto a full freeway. Now all the “on-ramps” don’t actually put you on the freeway, they put you in an exit-only off-ramp lane.

Drivers are required to wait for traffic to fully clear before entering a freeway in Oregon?

Not surprising, I guess. 217 has been jammed for much of the day, for years. Of course the knee-jerk response is to widen it rather than figure out other ways to reduce travel demand.

The improvement on Denney will be welcome, as well as the Hall overpass, which used to be part of my daily commute. The current situation is terrible: NO bike lane, no sidewalk, no NOTHING in the downhill direction. Pedal hard and pray.

Uphill direction at least has a ramp for cyclists to mount the sidewalk, but the offramp on the other side of the bridge dumps you directly into bad lane positioning in a dedicated right-turn lane, creating lots of potential conflict. Somehow I’ve never had an actual serious conflict at this point, but I’m kind of amazed by that. All in all, this will be a huge improvement. Hall has other big problems in other locations, but at least this one falls within the scope of the 217 project.

Thanks, GlowBoy, for the excellent summary of the state of the Hall Blvd overpass. I’m usually crawling uphill at about 6 mph when I mount the sidewalk, and like you I’ve had mostly positive interactions with drivers when I’m dumped back into the mixing zone on the other side. But I’ve always marveled at the way bikes are supposed to share that tiny sidewalk with peds while cars have four lanes expanding to five. Obviously bikes were an afterthought here.

12-13′ car travel lanes and no protected bike infrastructure. If ODOT and partners had any interest in safety, it is not reflected in their designs.

IIRC there’s a medium-sized industrial area on Denny at that point. But I agree; even with that there’s no need for 13-foot wide lanes. Narrow them to 11.5 feet wide and boom, there’s immediately room for a 4.5-foot-wide sidewalk on the other side of the road.

As for Hall, I don’t think it’s a heavy freight route at either point (there’s a lot of industry south of 99W but not north of it where the overpass is). So I see no reason to not narrow the three car lanes on the southern overpass to 10 feet wide, adding 3 feet of buffer to each bike lane. And on the northern overpass, narrowing each lane by 1 foot (11 feet for the outer lanes and 10 feet for the inner lanes) would allow for a nice 2-foot bike lane buffer too.

However, these improvements to the surface streets are definitely better than the current state of affairs.

That increase to Denny sidewalk will be nice but when cyclists who prefer to not ride on sidewalks come through here we won’t even have a shoulder now. If I ride to/from the SW Hills it’s over Denny and I already have to take the lane as it is given the poor state of the shoulder… so I guess no tangible improvements here either way.

Remember folks, the same Governor that wants cap and trade is also an advocate for widening highways and interstates.

When we have the Democratic primary next, how about we elect someone who isn’t a conservative corporate shill?

The improvements to the Hall overpass are sorely needed. The bike lane on Hall going westbound currently disappears when crossing 217. This still leaves an issue with westbound traffic trying to cross the bike lane to get to the southbound 217 onramp, however. I’m curious to see how that will be mitigated.

Any widening should have a bike superhighway components. Why isn’t bike oregon and bike portland fighting for this?

We are “bike oregon” and “bike portland” – we need to fight for the cycling infrastructure we want to see. Though I see the larger point, which is why improved cycling and ped infrastructure isn’t baked into EVERY project.

I see a lot of dreaming here, but by all means, y’all should get on it!
🙂

Beaverton’s facebook page had a celebration meme / expression of happiness when the news of this freeway industrial complex was revealed about three years ago.

… but that was in 2004. Apparently ODOT has decided to tack on the extra lanes but not charge for them.

“Key findings:
• drivers in the toll lane have the fastest trip on Highway 217
• reduces overall congestion on Highway 217
• has the smallest funding gap and could potentially be built sooner than other options
• provides most benefits to trucks in corridor”

“Government builds more roads” has been the goal and the headline for 70 years now. It’s not news until this is out of the norm.