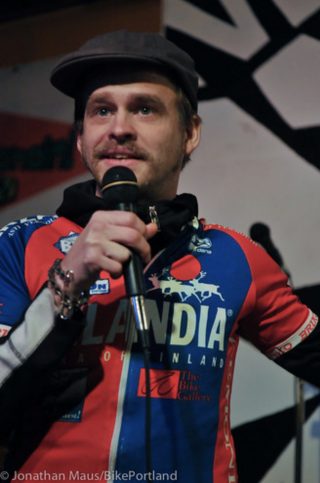 Zed Bailey beamed into Portland in 2012 and wanted to take our already legendary bike fun scene to the next level. They were bursting with creativity and volunteered to lead rides and help galvanize the spirit of other bike-loving Portlanders.

Sonder, who was also known as Cory or Zed Bailey, died last month in Hilo, Hawaii at the age of 41. According to sources who confirmed the details with family and the Hilo Police Department, Zed died by suicide.

Zed moved to Portland from Salt Lake City Utah where they lived for eight years. While in Utah, Zed created the “SaltCycle” blog and built a community around cycling. The blog is now defunct but the SaltCycle Facebook Group is still active and has over 2,600 members.

While in Portland, Zed was a regular attendee of Zoobomb and in 2013 took a leading volunteer role with Shift, a local nonprofit that promotes free bike fun and hosts events like Breakfast on the Bridges, Midnight Mystery Rides, and Pedalpalooza.

BikePortland profiled Zed in July 2013 just as they were about to reignite some of the magic that made Portland such a special place for bike culture back in those days. They told interviewer Michael Andersen their goal was to make Portland the “pedal party capital of the world.”

Zed felt like too much community building happened online and they wanted to create more face-to-face connections: “That’s what we do in Portland. We do it better, we do it bolder, we do it local, we do it with more love,” Zed said. “And you can’t do that with Facebook. I use Facebook, and I use the social networks, but I’m trying to push outward from that.” 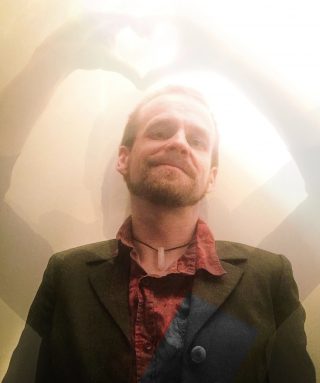 When asked what one thing people should do for the local bike fun scene, Zed replied:

One of the many personas Zed created for himself was Tall Bike Jesus. In May 2013 they created this film about participating in a bike move:

And while working with local filmmaker and musician Dan Kaufman, Zed created this video as a promotion for Pedalpalooza:

This past Monday June 29th, one of Zed’s old friends, Davey Davis, posted a remembrance on the SaltCycle group Facebook page. Here’s an excerpt:

“For those of you who didn’t know, Zed did more for Salt Lake’s cycling community than most. They founded SaltCycle, and under their design it was a thriving community resource a decade ago.

Zed was a mercurial, passionate community builder and a truth seeker. They had a joy and drive about the things that inspired them that was truly remarkable to witness. Bicycling in Salt Lake owes a ton to them, and I’m sure the other communities their passions led them to were equally affected. The world is worse off for losing them.

Zed was a freak in the best sense of the word. They was too punk for punks, too strange for burners, and too queer for queers. I considered them a friend, co-ran this site with them, and we probably organized a dozen events together, but I still don’t feel like I knew them at all.

First up, here’s a goofy supercut Zed came up with for an alleycat in about 2010: They had people sing Queen’s Bohemian Rhapsody line by line which I edited together into the following masterpiece. In many of the shots you can see Zed grinning like an idiot and eyeing the camera in giddy anticipation of how stupid, and silly, and wonderful the art piece they was working on was going to be, which is how I choose to remember them.”

Zed’s creative and fun personality had another side. One former friend who I spoke to for this article said he loved working with Zed and admired their creative drive and graphic skills, but also recalled troubling behavior and many damaged relationships. Since first publishing this story I have heard that Zed sexually harassed several women during his time in Portland.

On Saturday, July 18th Zed’s friends in Salt Lake City will get on their bikes and ride to remember him. “Come celebrate a giant in our bike community,” the flyer reads, “Ride a freak bike!” 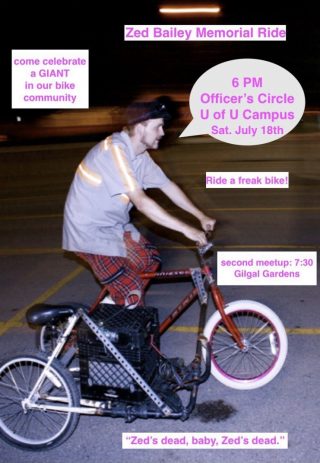 passed away from suicide, or died to depression might be better framing than “decided to end his own life”. Suicide is the final symptom of a debilitating condition that no one would choose to have. Portraying this symptom as a conscious choice feels like blaming people who have depression

Edit: that is, of course, only if he was a sufferer of depression and not on palliative care for something else

Thank you for pointing this out. I just edited it so it no longer says “decided to”. I’m not experienced at reporting suicide so I’m still learning the right way. Thanks again.

Thank you! I myself had only just learned about the other ways of framing it, so I wanted to share

And after hearing from another reader via email, I’ve edited the sentence again to read “Zed died by suicide.”

Thanks for pointing this out. Reporting on suicide is a tough job and language is important. However not people who die by suicide die from “depression”

I’ve done a lot of thinking about this and I think suicide prevention is an important topic! One of the leading killers of young people!!

Suicide is complex! To contradict what you said : **I wouldn’t say it’s always an outcome of depression though**. Suicide is like a fatal car collision (speed, alcohol, vehicle design, street design, etc all play a role).

Many pieces come together to result in a life ending suicide attempt (mental illness, drugs/alcohol, access to lethal means, etc). There are other mental illnesses aside from depression (PTSD, bipolar, schizophrenia, complex brief, drug use, addiction, complex grief, blag blah). Some people who die by suicide don’t have a diagnosable mental illness!

Luckily the data indicate that suicide is preventable, and usually people who have an unsuccessful suicide attempt won’t actually have another attempt later.

100% I had definitely over simplified it. It’s so tragic when people lose their lives like this and we have to consider all of the factors… Severe depression is just one particular circumstance that I am most familiar with

Never heard of him until now, but he sounded like a live wire who championed and spread many of the best things in life. Packed a lot of living into 4 decades.

A definite loss in our bike family. Zed had so
much love for earth and people, and lived with
much pain. I wish life could have given as much
love back.
We miss you Zed, sorry we could not be there
for you during your last days. ‘Til we meet again.

The most time I spent with Zed was when I was one of only 3 people to show up to their bikemove. Smallest I’ve ever been to.

Thank you for posting this. I remember Zed and Dan’s MMR. It was one of the epic ones that you talk about at other MMRs, “…and then they switched ride leaders halfway through!!” I always liked Zed. He really was (like mentioned above) a freak in the best sense. He had a lack of self-consciousness that was enviable. Whenever we saw each other on a ride we were eager to connect, even if it was a quick “how you doing?” We weren’t super close, I didn’t even know he moved to HI, and I can’t speak to what he was struggling with, but I am sad to know we won’t be seeing each other on any rides.

I loved that Zed was a creative individual who brought their unique energy to all the things that they participated in. Zed and I rode together on occasion, but my fondest memory of them was bringing to a shift business meeting (probably the same meeting the picture at the top of the article came from – it was at Velocult which I think is the location of that picture) the (at the time, this was 2014ish?) unpopular opinion that the shift website was out of date, and the complaint came with a demo – of our site ported to WordPress! While we didn’t end up going that way, it did spark the conversation that turned into us overhauling the shift website over the past few years. I’ll miss Zed!

Adding a voice to the conversation. Zed was asked to be banned from community groups locally in Portland, due to his ongoing sexual assault of women. Who knows if it was part of his demise. The great things one does in life, do not excuse the harassment and assaulting of women.

I am his brother, thank you for this.