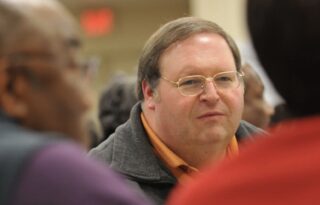 Chris Smith is outraged by what just happened.

The Portland Planning & Sustainability Commissioner member, transportation activist, and Metro Council candidate watched this morning as the unelected, five-member Oregon Transportation Commission brushed aside considerable concerns about the I-5 Rose Quarter project and voted unanimously to let the Oregon Department of Transportation move forward without any further objective analysis.

In response, Smith wants to strip the OTC of its powers to oversee urban highways. Here’s the statement he just shared with us:

Today we watched in horror, but not surprise, as the Oregon Transportation Commission voted to move the I-5 Rose Quarter Expansion project forward without a full Environmental Impact Statement.

The OTC has demonstrated that it thinks community input – over 2000 comments a year ago and another 460+ in the last two weeks calling for an EIS – is a virus, and it’s fully socially distanced and immune, casting this vote on a telephonic meeting during the middle of a pandemic.

I’m calling on the Oregon Legislature to remove responsibility for planning highways in urban areas from the OTC, shifting that responsibility to local MPOs (Metropolitan Planning Organizations). This is not a new concept, we do it today for transit. Just as Metro has planned the new Southwest Corridor light rail project, and is now transitioning it to TriMet for implementation, Metro should be responsible for planning highway projects in our region, turning them over to ODOT for implementation.

In light of today’s vote, Smith is urging Metro to use its authority to “force” ODOT to respond to community concerns around issues like air quality, emissions, bikeway and walkway connectivity through the project area, impacts to the Eastbank Esplanade, and the immense impact that construction is expected to have on mobility through the area.

“As a Metro Councilor, I will aggressively hold ODOT accountable to address community concerns, including using the Council’s authority over federal funds as leverage,” Smith said.

Far from a political opportunist, Smith has been a savvy critic of this project for years. In March 2017 he put forth a motion to the Planning & Sustainability Commission that would have taken the I-5 Rose Quarter project out of the city’s Transportation System Plan, a bold move that would have forced Portland City Council to either vote to put it back in, or convince regional leaders why it doesn’t belong there. Smith’s proposal was narrowly voted down 6-4.

In related news, Metro Council voted today to support an additional $129 million that will allow ODOT to acquire right-of-way and continue preliminary engineering on the I-5 Rose Quarter project.

So I am confused, so METRO Council today could have put “a pause” on the Rose Quarter project or sent a strong message to ODOT if it had NOT supported the request for funds for design and right of way…but did not?

That’s correct. Metro had to approve more than $100M in federal funds for ODOT to use for preliminary engineering and right-of-way acquisition. They did so on a 5-2 vote, giving up their leverage for all the conditions they have asked ODOT for on this project.

Chris, in what other states have state legislatures shifted control of interstate highway planning from the state DOT to the local MPO?

David, nationally the deck is stacked to making transit projects jump through lots of hoops and highways almost none. We can be a leader in changing that.

Chris, you are more familiar with the Rose Quarter project than I am. Clearly the state legislature is very intent in getting this project completed and ramming it through the city, preferably without an EIS. Has there been any significant effort on convincing state legislators from outside Portland, who tend to be very conservative no matter their party affiliation, to spend the $1 billion elsewhere outside of the Portland metro area, to distribute the money to their own district projects? For example, build an Interstate 7 to replace US 97? Or upgrade their rural and suburban highways? Basically to “starve” the project of all it’s funding?

There was a bill that went nowhere in the short session to move the money to I-205, which would be equally bad if not worse. The trick would be to keep it in the urban area and use it to prepare orphan highways for jurisdictional transfer.

Which is more important to you: Keeping the money within the district or region, or not building the freeway expansion?

If the money builds a freeway expansion in the urban area, I would consider that a loss. Doing something climate-friendly and productive with it would be a win. Obviously there are a spectrum of possible outcomes in-between.

the i-205 project is moving ahead at full speed. When it did not receive.
funding, ODOT leadership decided to pay for it with tolls

A very good question, and the answer is zero for a reason. If you break up planning of state highways into various municipal fiefdoms, the system will fail to work. Metro can plan the light rail lines because the entire system falls within its boundaries.

ODOT acquired real estate for a freeway along Powell that now is green grass and campers.

SE 148th is so utterly wide because it was supposed to be a major onramp for that same freeway. Back when I was a 3rd-rate peon (intern) at PBOT in the 2000s, I had an opportunity to peruse the Mt Hood Freeway plans – it’s fascinating if you ever get the chance to look at them.

They serve “at the pleasure of the governor”.

If the Interstate System ended up in local control where it enters city limits wouldn’t that defeat its purpose? Would The Dalles, Pendleton, Baker City get authority over I-84? How about Grants Pass and Medford over I-5? Probably there has been some level of co–operation, such as in Troutdale with the I-84/Jordan Road project, and some in Tualatin with I-5, but I doubt that the state hands over greater control, especially if they already own the ROW. There must be by now a whole body of regulatory decisions regarding state or local control of the Interstate System.

True from a 1960s perspective – though the federal highways has learned since then its better to build access controlled interstates up to the urban boundaries of cities as a beltway vs, right through the middle…moving national commercial through the middle of congested cities is a looser for shipping and expensive to build.

David Hampsten
SE 148th is so utterly wide because it was supposed to be a major onramp for that same freeway. Back when I was a 3rd-rate peon (intern) at PBOT in the 2000s, I had an opportunity to peruse the Mt Hood Freeway plans – it’s fascinating if you ever get the chance to look at them.Recommended 1

The paper copies are in archives somewhere, probably with city, with the county, and with ODOT. I’d start by looking in the city archives. For your online searches, start with the city’s efile system: https://efiles.portlandoregon.gov/Record?q=recAnyWord%3Amt+hood+freeway&sortBy=recCreatedOn&pagesize=100

Can someone please name who are the five Metro Councilors who voted in favor, so we can consider voting for other candidates in the future?

I’d suggest organizing their constituents to get them to change their minds before looking for folks to run against them. Craddick and Dirksen are term limited. There is an active race to replace Dirksen right now, I’m honestly not sure where the candidates in that race are on the freeways. Voters in District 3 should try to pin them down!

Telling that support for highway expansion is from councilors that are in districts that are not directly affected.