Hank’s Dairy, Les Femmes, House of Sound, Fred Hampton’s Health Clinic — these are all important parts of the history of North Williams Avenue that have been all but erased today. 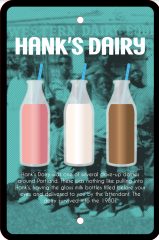 The ‘Black Williams Project‘ — which will be unveiled this Saturday June 3rd — aims to re-insert these places and the people who made them, back into our consciousness.

The project is one of the many tangible outcomes of the Portland Bureau of Transportation’s North Williams Traffic Safety Project. This project began in January 2011 as an attempt to improve the busy bikeway on Williams Avenue; but after concerns of racism from some people in the community and a lack of black voices involved in the planning process, it morphed into a citywide debate about the role bicycles play in gentrification and systemic discrimination. 18 months later a PBOT stakeholder committee decided on a major redesign of the street. In addition, stakeholders felt that users of the street should have a permanent reminder about the vibrant black culture that existed there long before the new high-rise apartments, breweries, and thousands of daily bicycle commuters.

PBOT committed $100,000 of the project’s $1.5 million budget to the Black Williams Project in July 2013. As we reported last year, the project will include interpretations of the neighborhood’s cultural past through a series of sidewalk tiles, signs, sculptures and kiosks created by local artists Cleo Davis and Kayon Talton Davis. There are 40 art pieces in total.

Now the work is ready and PBOT is hosting a “community celebration” for its unveiling. Here’s a snip from the invitation:

Williams Ave. was once the vibrant heart of Portland’s Black community. Formerly known as the “Black Broadway,” the corridor included a concentration of Black churches, businesses, social service organizations and nightclubs that were thriving and active community institutions.

Although the landscape has changed, there is much to remember, celebrate and build upon. In 2012, the Williams Ave. Safety Project Stakeholder Advisory Committee recommended to the Portland Bureau of Transportation (PBOT) that these stories be honored through an art history project that would have a prominent place on the corridor. Thus, the community-led Honoring History of Williams Ave. Committee and the Historic Black Williams Project were born.

Since then, local artists Cleo Davis and Kayin Talton Davis have been collecting stories, memories and histories from Black community members… We hope that this project will serve as both a visual archive and an inspiration for future community efforts.

At Saturday’s event you can expect to hear from the artists and neighborhood leaders and there will be group and self-guided walks.

For more on the art, the artists, and the important context around this project, read this story from The Skanner.

Saturday’s event begins at 12:00 pm at Dawson Park. Check out the event listing for more details.

Another interesting visual tool for education would be to add a “red line” in thermo across roadways* (or sidewalks or ringing utility poles, etc.) as to where banking and federal/city housing policies limited african american property ownership / bank loans post war. [And a corresponding Google Map layer to pull up while walking about.]

*Not related to traffic control.

“Although the landscape has changed” is pretty impressive use of the passive voice.

And this story is about bicycling exactly how?

This art project would not exist were it not for the Williams bikeway project. That project morphed over its existence from mostly a bike infrastructure project to a general street safety project with new signals and crossings. But more importantly, the Williams bikeway project became much more than a transportation project. The historical and social/cultural context of the street itself is an important part of how we should experience Williams Avenue. Williams is the busiest and – in my opinion – most important bike street in Portland. It is also in the heart of a part of town that suffered greatly from racist planning policies — the impacts of which many people continue to feel today.

I would like to think that BikePortland can be about more than just the singular, specific cycling issue. To me, the sole editor and publisher, cycling isn’t just a thing we do — it’s the way we understand our city. And the history of the streets we ride on is a big part of that understanding — especially when the mere presence of 1000s of bicycle riders has played such a decisive role in that history.

Hope that helps to clarify. it’s still early and this is a deep topic!

If you’re curious to learn more about why this is relevant to bicycling in Portland, I encourage you to look through the back history on BikePortland, which has seven pages worth of summaries alone:

This project gained national media attention and has (hopefully) shaped how PBOT approaches all bike projects in the future. It really opened my eyes to how the issues of racial discrimination and cycling infrastructure are far from orthogonal.

Thanks again Jonathan for your reporting on this project. It’s been a fascinating learning experience.

Amen to both Jonathans, and also see yesterday’s Monday Roundup (emphasis mine):

“While we move on with covering bicycling and related news, my thoughts remain heavy with the many issues surrounding the hate-fueled attacks on innocent people that happened Friday on a light rail train in northeast Portland. I’m not sure what form the incident and its aftermath will take here on BikePortland, but it will have an impact — both on the stories we cover and how we cover them, as well as the content and tone of the daily discussions we have in the comments.” –Jonathan Maus

I’m looking forward to seeing this on Williams!

I am really glad you wrote this story! I may not have heard about it otherwise, and now I am looking forward to taking my family to the opening. Bikes are a visible symbol of gentrification and riding through a place does subtly change it. Building significant bike infrastructure changes it more. Neglecting to install any safety improvements for decades also changes a place. Condemning and destroying cultural centers to install a freeway completely alters a place. People riding bikes have a relatively small effect, but it is cumulative. PBOT has played a large role and ODOT a larger role still in changing this place. The histoy of North Portland is an important and partly tragic part of Portland’s history and it is critically important to on-going race relations that this history is told (and told honestly, not like the glossed over Civil War memorials in New Orleans). I applaud BikePortland for drawing attention to this and acknowledging the role that people riding bikes has played in changing this place and how Portland and Oregon’s transportation planning can have dire consequences with clear winners and losers. This is one of the most promising pieces of interpretation/art I have seen in long time and I am very excited to experience it.

My hope is that everyone can ride bikes on the same streets, and that a low cost, healthy, and sustainable form of transport will not take on an undeserved symbolic meaning.

In fact, I think this comment wins, Kitty! Tell them to just shut it down.

fwiw monkeysee, I always try to approach these comments and all my discussions about important issues as an evolutionary and dynamic process of learning and moving forward… The idea that there always has to be a “winner” (and therefore a loser) in online conversations is, IMO, one of the main reasons our country is so f’d up.

I find it contrary to “dynamic learning ” to sequester the most accessible and humble form of transportation into a pitiful dogma. Our social ills are not due to the bicycle. Anecdotally, I moved to North Portland 15 years ago because it resembled my far more racially diverse hometown. I now live in van.
Gentrification has pushed my family to the ropes as well, and I’m as pale as they come.
You see the bicycle as a systemic tool of repression . I do not.

Gentrification is primarily an economic force.

Hear, hear.
Kitty’s comment is reasonable, and so is my response.

Keep in mind that you (and I and we) don’t get to decide whether a symbol is deserved or not. Everyone has a right to attach whatever meaning they want to bicycles and I think it’s my (our?) responsibility to be aware of those meanings and respect them — whether we agree with them or not.

And FWIW what happened with the Williams project had absolutely zero to do with the myriad benefits of bicycling.

I hear you. But that doesn’t change my lament that bicycles have become such a negative symbol to some people, even if I think I understand why that may have happened.

We can’t change the past, but that symbolism creates a conundrum for the future: build bike facilities and promote gentrification, or don’t and promote neglect and stagnation.

Or break out of a false dichotomy and work with or donate to organizations like the Community Cycling Center, who have done a lot of reflection and work to understand this dynamic:

I agree and I do.

Thanks so much for posting this news!

I also want to encourage folks to support the talented artists behind this project, Cleo and Kayin, by patronizing their businesses Soapbox Theory and Screw Loose Studio, one of the few black-owned businesses still on North Williams:
http://shop.soapboxtheory.com/
http://screwloosestudio.com/

They’re on N Williams across from Hopworks Bike Bar.