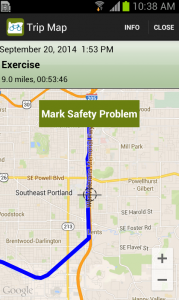 A screenshot from the
ORcycle app.

If you run into a bike safety problem in Oregon and own a smartphone, you no longer need to know who to complain to.

The ORcycle mobile app, a partnership between the Oregon Department of Transportation and Portland State University, has just been hooked up directly to the state’s “Ask ODOT” hotline, which has pledged to forward all reports it receives about bike safety issues to the appropriate local agency — or to its own team, if the road is owned by ODOT.

It’s a huge leap for the project, which has existed in demo form for a year but has been little-used because any reports were stashed for weeks or months under PSU’s supervision rather than piped directly to ODOT, let alone forwarded to other agencies.

Now, however, the free app has been integrated directly into the state agency’s operations.

The app, available for Android and iOS, lets users upload photos and pinpoint the geographic location of the problem, either from the site of the issue or afterward.

Hooking the reports up to the existing Ask ODOT service “seemed like a natural partnership when PSU said, ‘Hey, let’s get this to the next level,'” ODOT spokeswoman Shelley Snow said Wednesday.

Ask ODOT’s mandate is to either refer or address any issue within five days of a report. For issues on its own roads, Ask ODOT staff — there are three or four on duty at any given time, Snow said — respond with either an action plan or a clear statement that the agency isn’t able to prioritize a fix.

Snow said reports from the app are unlikely to overwhelm the hotline, which she said already fields “hundreds of phone calls and emails on a daily basis.”

The app also invites people to log “crashes or near misses” and gives users the option to log all their trips automatically, which ODOT hopes is a way to start gathering data about bike traffic flow in the area. Both of those options continue to send data to PSU for eventual review by ODOT but don’t lead directly to ODOT action.

Cars. Too many of them.

That’s my road safety issue.
Thanks, ODOT for fixing that within five days.

If no smartphone, but a desktop computer … where to report ?

I’m sure I’m not alone in being a bit skeptical about action being taken on reports (“either an action plan or a clear statement that the agency isn’t able to prioritize a fix” seems to leave a whole lot of room for ignoring incoming data), BUT I heartily approve of the data-collection itself.

As long as those using the data understand that it was collected by people who own expensive smartphones, and therefore may not represent problems in all parts of town, it’s a step in a good direction.

PS I’ve installed the Android app. It seems reasonably well designed. For one thing, yay, it’s explicitly interested in all kinds of trips, not just commutes. The profile section asks about the number and type of bikes and “vehicles” (presumably motor) in the household along with the usual census-type age/ethnicity/gender and income categorizations.

In short, just off the top, it seems to reflect an understanding of real bicycling concerns across a spectrum.

This is a lot like Eugene’s iBikeEugene app for reporting issues for Eugene (like leaves in the bike lane.) It’s been going for a couple years and issues are usually dealt with within 24 hours.

I like my RidewithGPS..if they could intgrate things that would be cool

The cynic in me just says they have information in an easy-to-ignore form. I wish I could say I was just kidding. But I do not think that this will ever result in significant change in bad infrastructure.

Response to problems is complaint-driven. No report no fix, guaranteed. Which, incidentally, leads to equity problems.

Thanks for the heads up about this. I’ve downloaded the iOS app and will start using it. I will comment later to let people know whether issues I report are addressed. I’ll start with potholes on my commute. Oh, and the disappearing bike lanes when you come off the Hawthorne Bridge into downtown.

This is pretty cool. It would be cooler to get the same thing as a webapp, someone bug PSU about that.

I uploaded several reports during the pilot phase. Are these reports being forwarded… or should I re-submit reports… such as the frequent right-hook issues on SW 13th at Clay, where drivers often fail to look right before gunning it to get on Hwy 26 westbound?