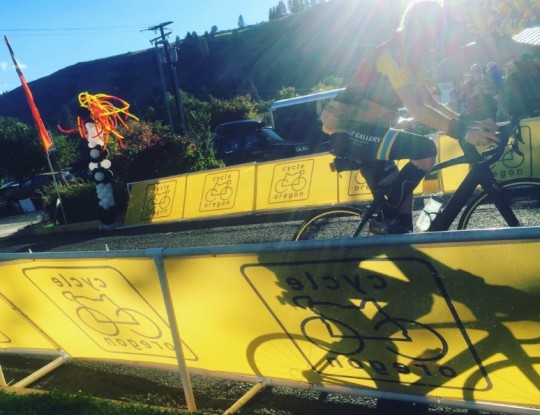 Another Cycle Oregon rides off into the sunset.
(Photo © J. Maus/BikePortland)

Cycle Oregon wrapped up its 28th edition in Baker City on Saturday. 2,200 riders and hundreds of volunteers and staff have packed up their tents, taken down road signs, and returned their support RVs and “sag wagons.”


It was a wild and unprecedented ride. Never before has Cycle Oregon turned back and failed to arrive at a planned overnight destination; but when a fire broke out near Halfway last weekend, organizers had no choice other than abort the mission. 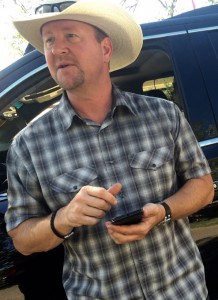 Amazingly — yet not unsurprisingly if you know anything about the top-notch Cycle Oregon crew — Plan B came together without a hitch. We retraced our pedal strokes from Cambridge (Idaho) to Baker City, then on to La Grande via the Grande Tour Scenic Bikeway. Our penultimate route, which organizers scrambled to put together on short notice due to the fire, ended up being many people’s favorite ride of the week.

The big change in plans produced winners and losers. The towns of Halfway, Joseph, Enterprise, and many others along the original route were undoubtedly disappointed that we never arrived. But places like Cambridge (where we stayed two nights instead of one), Cove, (tiny) Pondosa, and Baker City surely embraced the added business.

For Cycle Oregon itself, 2015 will probably be remembered as the year the ride became much more than just a ride. Yes, they’ve known all along that the ride was just a tool to empower their mission of boosting the economic health of rural Oregon, but what 2015 proved to them was that Cycle Oregon really is a community. Ride Director Steve Schulz and Executive Director Alison Graves regularly refer to the rolling city of 2,500 as “family” and that idea has likely never felt stronger than it does now.

While many were disappointed to not see the marquee attractions of this year’s ride — Hells Canyon and Wallowa Lake — 99% of riders rolled with the changes. When the news was announced in camp on the night of Monday the 14th, it was followed almost immediately by shouts of support.

The fire as seen from Halfway. Photo taken by Ride Director Steve Schulz during a visit to assess the situation.

And Cycle Oregon needed all the support they could get. In an interview that night, Schulz told me that in order to get the event turned around they, “crammed eight months into work into three hours.” How did they pull off such a feat of planning? “Everybody jumped in,” Schulz explained. “It was amazing. Everyone — staff, volunteers, community partners – everyone stepped up and asked, ‘What do we need to do?’… I’m just emotional about everyone’s support.”

Cycle Oregon is all about helping other people. It’s about giving grants so a small town’s football field can get new lights and it’s about creating more tourist dollars to sustain towns whose economies teeter on the brink. But this year it was Cycle Oregon that needed help.

In the end, Schulz said, Cycle Oregon is stronger for this experience. “People say it’s the best bike ride in America? Whatever… It’s not really about the bike ride anymore. It’s about that Cycle Oregon experience.”

And it’s a great time for the organization to get stronger because Cycle Oregon faces a lot of challenges as they near their third decade. In addition to figuring out how to make an even greater impact on rural economies, they must do something to bring in younger riders (the high average age was a topic on everyone’s lips this year), and they must find a way to keep the riding experience fresh and interesting (offering routes on unpaved roads is one idea).

When Ashland innkeeper Jim Beaver and The Oregonian columnist Jonathan Nicholas did the first Cycle Oregon in 1987, they had no idea it would survive this long. The same spirit and enthusiasm that has sustained the ride is as strong as ever, so I’m confident that its future is too.

— Hope you’ve enjoyed my coverage from the road. Read all of it here.

Unfortunately, the Cycle Oregon “experience” — aside from the shortened weekend version in the summer — is never available to teachers since it always takes place after school starts. Bummer.

That is a problem and I’m sorry for teachers but honestly I would not want to change the date either. I think that if we had it in summer that it would then become a family event. Of course nothing wrong with families but I do enjoy that it is an adult event with live music, beer gardens and the like. I understand the CO weekend has a MUCH different feel to it. But I agree it does really suck for teachers. Sorry you can’t make it.

I think that if someone who is below drinking age can compete the week of intense bike riding that Cycle Oregon requires, then we should congratulate them for their strength and for defying the stereotype of youth. We should not be afraid of the event being taken over by these youngsters. Having younger people at the event does not mean that there cannot be a beer garden or live music, it just means that kids won’t be allowed in the beer garden. The point of Cycle Oregon in my opinion should not be about creating an adult event centered on partying after getting the ride out of the way, but focus on the ride itself AND having fun afterwards. If someone is badass enough to do this kind of ride, they deserve to be there, regardless of their age.

Thanks, Jonathan. It was great to have you along and we appreciate your emphasis on the small communities we visit and the economic impact that bicycle tourism is having.

I understand Danny’s frustration that virtually anyone who has kids in school or works in the education system can’t join the Week Ride. As Jonathan noted, we are looking at other Cycle Oregon experiences that would take place other times of the year. Plus, the Scenic Bikeways program is a way to experience your own cycling adventure — and sustain the economic boost any day of the year.

And I just gotta emphasize that the east side of the Grande Tour Scenic Bikeway is simply not to be missed… and that Pondosa store. Simply amazing.

A very BIG thanks to the CO team for pulling this together!! In spite of the change in plans we all had a great time.

I’m glad its over.
So we can get back to more pressing sensationalist stories.

It had to “abort its mission”? Hey, its a recreational ride, not a moon landing. I applaud the staff for salvaging the rest of the ride, but keep in in perspective.

I suspect the reasons it’s not done in summer are heat and more traffic.

A lot of credit goes to the communities that allowed us to back track, as we had to do. Cambridge, Idaho canceled school for a second day to allow us to stay another night at the high school. In a town where so many students live in the country, this was no small matter. Life kind of stops in these places when this circus comes to town, the number of community people and groups that help us is amazing, they give up their normal life to get up and serve us breakfast, tote our 60 pound bags to the truck, even smile and wave to us, sing us a song at a rest stop and cheer us on to the next place down the road. To do this on a minutes notice needs recognition and appreciation.

I like that. Cancel school so a bunch of rich bicycle riders from out of the area can camp in their gym. The message is there, kids. Forget school. Get rich riding your bicycle!

And I was thinking what a great lesson in civic participation. Many of those families, children, and teachers rally to help CO put this together in their community.

I am very torn about the dates. I think Sept is an excellent time of year for riding and the perfect time for Cycle Oregon. But it’s really hard for me to go, because my kids are in school and being gone for a whole week right at the beginning of the school year is quite difficult. I’m sure I”m not the only 40-ish year old in that situation. My teen wants to go as well, she’s highly motivated to train (she’s already got several 40 mile rides under her wheels), but she can’t miss a full week of school. So I”m sure the timing definitely skews the demographics to older participants who can take a week of that time of year.

Cycle Oregon is great for the “adventure”, but there are safe bicycling opportunities near Portland to experience touring, without spending over $900 for a week.

It’s great that Cycle Oregon focuses on “rural” areas economic needs. Bicycle tourism is big in Portland too, with the Pedalpalooza and the Naked Bike Ride. I wrote both Cycle Oregon and BTA to try to revive “Get Lit” (the free bike lights program I started) requesting a grant from Cycle Oregon and Volunteerism from BTA. Neither organization acknowledged my request. Bike Tourism, Bike Safety and Vision Zero is great conversation, but actually doing something to help attain those goals? crickets.