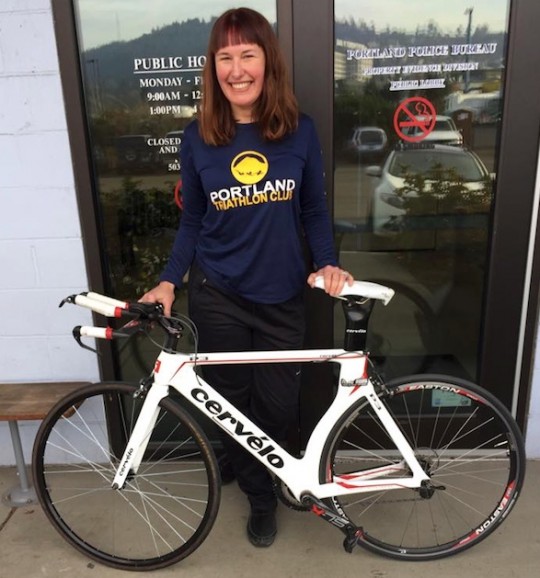 When it comes to recovering your stolen bike, there’s simply nothing more powerful than a caring community and social media. Add in the cooperation of police and you’re nearly guaranteed to get your bike back.

On Monday, the Portland Police made an arrest and recovered a stolen bike that was taken from Oak Grove resident Sherrie Austin nearly two months ago. We caught up with Austin last night to hear her side of the story.

On January 21st, Austin, a 47-year old market researcher, parked her car in southwest Portland (near Riverplace) while she got a haircut. She left her bike on the rack of her car and locked it with the cable that’s attached to the rack. “I figured I could leave it for 90 minutes,” she recalled.

Unfortunately a thief walked up, snipped the cable, and her bike was gone. (Please take note: Cable locks are useless. If you like your bike, never use them.)

Austin had invested about $3,000 into her bike, a Cervelo Time Trial machine she uses to train and compete for triathlons (she’s an active member of the Portland Triathlon Club). She figured it was gone for good and she’d never get it back.

Austin didn’t know Gibbs, but she saw the post thanks to a “friend-of-a-friend” who tagged her on the post. Even before Austin saw the Facebook post, Gibbs took charge and tried to buy the bike from the thief for $100. After telling her the bike belonged to his sister, the thief (who, interestingly enough is a well-known bike thief who I’ve talked to several times in encampments near the Esplanade) told Gibbs he wanted $400 for the bike. They agreed to meet again later so Gibbs could get the money together.

Gibbs then coordinated with Austin and they looped in PPB Officer Dave Sanders from Central Precinct. At this point Austin also listed her bike as stolen on BikeIndex.org (a crucial step that helps police build a case against the thief). Gibbs also had security video footage of the suspect from her employer’s building. Everything was going according to plan but then the thief stopped returning Gibbs’ calls and they never saw him again.

“At that point everything went silent for a long time and I figured it was gone for good,” Austin said.

Then on Monday, six weeks after it was last seen, the bike re-appeared on the streets of Portland and another suspicious person posted the bike to Facebook… 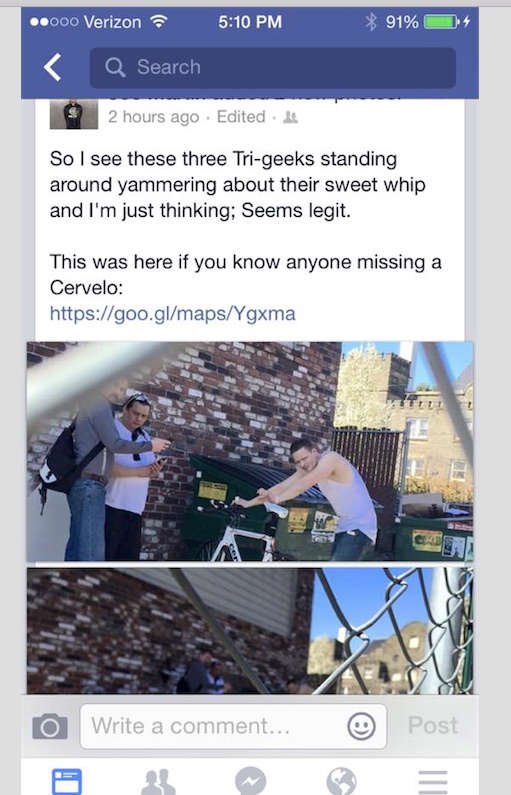 A friend of Austin’s saw the post and forwarded it to her. From there, Austin called the police and shared the image and the location where it was taken. It turns out that another person had called in a tip about the bike to the PPB. The tipster gave the police a description of the man riding it. With all that information, officers were on high alert.

On March 9th, officers spotted the bike and the suspect on SW 10th and Morrison. It was being ridden on the sidewalk by 36-year old Ronald Pickard. When officers approached Pickard for questioning, the PPB says “he almost ran into them.” After he bungled a few questions about the bike, they ran the serial number and sure enough it came back as stolen.

Pickard was arrested and booked into the Multnomah County Jail on charges of Theft in the First Degree (for receiving stolen property), Possession of Methamphetamine, Possession of a Controlled Substance and a parole violation.

Austin is overjoyed to have her bike back, but she’s still annoyed that the man who originally stole it got away. Her advice to others is to make sure all your bikes are registered and keep serial numbers and photos in a safe place. Then, if your bike gets stolen, create a listing and report it to police immediately.

— In addition to BikeIndex.org, we recommend Project 529. Both services offer excellent ways to register (pre-theft) and list your bike if it gets stolen..

Bike thieves should have to wear the black n white stripes and work off the value of the bike and everyone’s time involved, by sweeping bike lanes from sunup to sundown.

Waiting for the day when cyclists do their own bait bike, and swoop in on the thief for a citizens arrest. Maybe a little U-lock Justice just to let thieves know that crime will now HURT.

Cross my fingers, but it’s been ten years since I’ve had a bike stolen. The five that came before were all great losses. You can imagine the heartbreak and anger I felt when one appeared on craigslist less than a week after the statute of limitations had run out.

But, uh, let’s have the punishment fit the crime?

Middle of the Road guy
Reply to  Jim

I know there are those who would say “violence is not the solution”…but is sure is a great deterrent. If these thieves knew there was a valid risk of a beat down, I suspect it would influence their behavior.

If this story of stolen bike recovery were the norm rather than the very rare exception I’d be enthusiastic and congratulatory. But the vast majority of stolen bikes are never recovered. And that’s nothing to be proud of, Portland. No matter how we spin it.

The cliff notes version:
Lesson one: cable locks only protect your bike from you removing it;
Lesson two: register your bike as stolen with details as soon as possible;
Lesson three: ride a distinctive bike; and
Lesson four: have lots of good observant friends.

The Portland cycling community should consider making a deal with the Portland meth-head community — we agree to buy them meth or keep them stocked in supplies, and they agree not to steal bikes. The least we can do is start protesting for legalization.