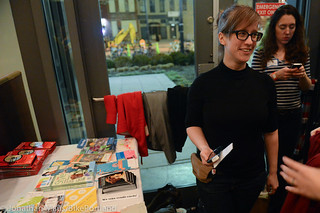 One of the power couples of Portland biking has decided to formally join forces professionally, too.

Elly Blue, creator of the Taking the Lane zine about feminism and biking and the author or publisher of several other bike-themed books, announced this week that she’s merged her living-room operation Elly Blue Publishing with Microcosm Publishing, the Portland-based independent publisher founded and managed for years by her partner Joe Biel.

Microcosm, in its 19th year of business, has a staff of 11 and a storefront on North Williams Avenue that’s stocked with lots of great bike-related titles. Among them: Blue’s two books, Everyday Bicycling and Bikenomics, both published by Microcosm. (Bikenomics, Blue notes happily, was Microcosm’s top-grossing title of 2014.)

Biel is also the creator of Aftermass, a documentary film produced by Microcosm about the modern history of bicycle activism in Portland.

Blue, who worked as a writer and editor here at BikePortland from 2006 to 2011, will become a part-owner and marketing director of Microcosm. She wrote in an email that she’ll also “continue to publish and fully manage my line of feminist bike books (including how-to books, children’s books, and of course science fiction).” 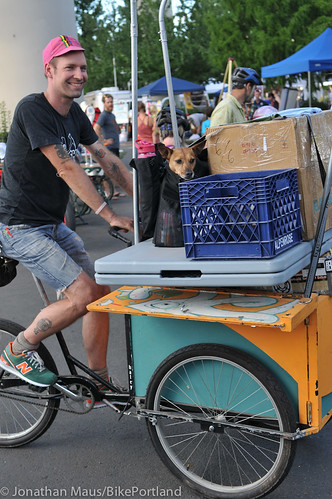 Here’s Blue’s take on her role in the future of Microcosm:

Microcosm has been putting out bicycle-related stuff since way before it was cool (case in point: the company’s chainwheel heart logo, and Joe’s iconic Evolution and Put the Fun Between Your Legs designs). Obviously, bikes are going to grow as a focus now that I’m bringing my authors and networks to the table. Bikes are the future and Portland’s right in the middle of it.

The merger makes a ton of sense — half the world already thinks that Joe and I are part of the same operation, and we’ve been sharing ideas, energy, and practical efforts since we started dating six years ago, leading to a lot of similarities and connections in our brands, our designs, and how we do business. Now that we’ll be officially working together, the benefits to everyone are already becoming clear.

The merged operation has a 975-title catalog. One of Blue’s continuing projects will be the next incarnation of Taking the Lane: an annual Journal of Bicycle Feminism.

Blue and Biel are two bright lights in Portland’s amazing constellation of biking thinkers, makers and artists. We’ll be eager to see what their joined business operation comes up with next. 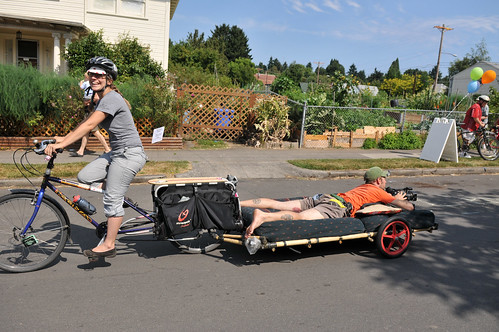 Blue (riding) and Biel working on a film project in August 2011.

Update 1/7: Their first order of business is a party. Blue writes: “We’re inviting the world to the Waypost (3120 N Williams) on Tuesday, Jan 27th from 6-8pm for a low key celebration of the Microcosm/EBP merger.”

Thanks for the write-up, JM! It’s wild thinking about how much (and how little) has changed since I started sending you those cheerful op-eds back in 2006. Really appreciate everything I’ve learned from you and the BikePortland community.

I love this dynamic duo.
Portland is lucky to have ’em!

Thanks for the rad article and kind words! We’re trying to keep the vision and ideas of Olde Portland alive over here! So much so that we moved across Williams from where our office was ten years ago!

Makes too much sense to me!

“Blue and Biel are two bright lights in Portland’s amazing constellation of biking thinkers, makers and artists. We’ll be eager to see what their joined business operation comes up with next.”

I LOVE both of these small businesses!
Cool, useful stuff being done by smart people!