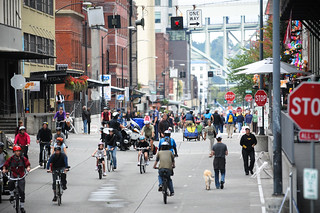 Shaking up the route planning is just one.
(Photo: J.Maus/BikePortland)

As of this summer, Portland has six years of open-streets festivals under its belt. If Sunday Parkways were a kid, it’d be in kindergarten. If it were a bad relationship, it’d be fraying around the edges.

Fortunately, Portland has a pretty great relationship with these remarkable summertime events that have become popular across the country thanks in part to our successful experimentation. All the more reason to try spicing things up with some interesting tweaks.

On Monday, BikePortland reader Gutterbunnybikes was one of many with some great suggestions. These seemed particularly creative:

Though I got to agree, with a few of the comments here.

1) Fairs not on the main route. Though the root beer floats were awesome, and frankly I would have missed it if it wasn’t on the route. Thanks Oregon Public House.

2) A few side routes, making smaller loops for kids on bikes. Perhaps a bigger one for the more experienced riders, perhaps even a few that duck down some alleys, smaller trails, unimproved roads.

4) More education stuff. Why not bring in people to talk about the effects of bike riding on personal economics, global warming, safe road use, packing groceries, how to use TriMet with a bike, or even simply how to ride a bike for kids and another for adults, skill courses, etc…the list goes on.

5) Have it end at dusk with the last event being a bike “drive in” with the Movies in the Park program. Though unfortunately I can’t think of a bikey movie that I’m glad I watched the first time, let alone sit through them a second time.

And I too would like to thank (especially those that were too busy for me to say thank you as I rode by) all the organizers, volunteers, police officers, and the people that live on the routes for doing such a good job with this. It really is amazing.

What do you say, Portland? Maybe test one or two of these concepts for one ride next year?

One of my favorite movies of any genre.

You beat me to it. Totally agree!

Yes, Breaking Away, best bikey movie of all time. If you lived through the 70’s bike boom.

Instead of one bike flm maybe a mini filmed by bike festival???

Let’s give credit where credit is due. Portland as inspiration? Maybe. But it all stated in 1976 http://en.wikipedia.org/wiki/Ciclov%C3%ADa Let’s back off the clapping ourselves on the back just a bit…

John, you’re absolutely right, that’s where Linda, Janice, and so many more who I am forgetting got the idea back in 2008 (2008? 2007?), and the first few years that was referenced quite a bit! Now, Portland’s Sunday Parkways has become its own beautiful thing, and Ciclovia’s a bit different, in that it is ONE major street, every week, rather than a different neighborhood once per month. I would love to see it every week, too! Unfortunately the cost of organization, permits, and police officers to work with our neighbors prohibits that! But if you’d like to donate to see a happy, healthy Portland Sunday Parkways, you may do so here:

This is revisionist nonsense. Sunday Parkways was not supposed to be *only* a bike ride. It was meant to be open to all forms active transport. Sadly, due to overcrowding and misbehavior it’s become a distinctly unfriendly event for pedestrians, joggers, and others who move more slowly.

“Thanks in part to”! Portland’s was among the first modern events like these in the States, adopting/adapting the Latin American tradition that was documented by (among others) Streetfilms in December 2007 and launched here in June 2008. Definitions get blurry, though. Seattle’s Summer Streets are similar and also launched in 2008. The Netherlands had mandatory car-free Sundays during the 70s oil shocks. Etc.

I was surprised not to see an earlier start on the list. Can we add that?

I’m flattered, especially considering some of the great comments and debate on site this week – Clinton street was particular good.

Funny how everyone jumps on the drive-in suggestion. I like the idea, but personally I liked the mini-conference idea the best. After all if the idea is to promote bike riding, lets show people of all skill levels how to improve their efforts and more frequently and effectively use the tool.

The one that I also felt strongly about that I didn’t include in the this list, was one out farther east of the 205. Yes there is the SE one, but I don’t consider riding on the Springwater as opening up the roads for active transportation.

Agreed: bike-in movie would be fun and popular, but I’d personally go to a talk, a little seminar, or even a how-to-ride-like-a-Dutch-person practice session.

I didn’t see anyone mentioning the Bike Blessing guy on NE Going Street last weekend, but I thought that was pretty cool too.

Middle of the Road guy
Reply to  gutterbunnybikes

There is a reason why it is the same route each time – the neighbors get used to it and every year on the same route allows for better planning around the traffic.

If it is a new route each time, it is much more difficult to manage.

I love Breaking Away and American Flyers. Bit try to beat these 4 minutes for cycling advocacy inspiration/aspiration.
https://m.youtube.com/watch?v=OrQ-d2PBUto

All of the above – especially the movie! But definitely like the idea of a smaller route for little ones. I don’t do the east side Sunday Parkways by bike anymore because it’s predominantly a family event with parents reining in their kids on bikes and so it’s become more about navigating rather than looking around at different neighborhoods. Loved the one in Southwest last year because even though it was a hard route with the hills, I as a grown up could enjoy a new area at a regular speed (and I’m not a fast cyclist by any stretch). But either way I think this is a great event! Now if Portland could revive the Tour of Green Homes and coincide this with SP!

What about bike powered floats? Like a homemade contest of “best ___”, with different themes for each route.

SP is not really something which interests me but then again, its not really for me. I think it already does a good job at what it is intended.

As a regular volunteer for Sunday Parkways, I can say first hand that there is a shortage of people out there that are willing to make it happen, whatever ‘it’ is. We are always shorthanded when it matters most. My idea for an improvement would be for everyone to volunteer at least three shifts, every year.

Great reminder, Paul (and Curtis, above).

Without detracting from it in any way, I’d argue that one good way to keep luring volunteers is similar to the way to keep getting people to come to public meetings: keep finding new ways for the outcome to be interesting or inspiring.