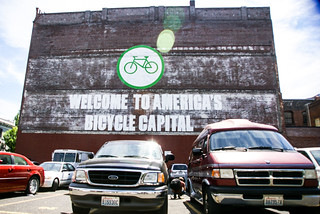 A city code enforcement decision that a mural declaring Portland to be “America’s Bicycle Capital” is an unpermitted billboard, and must be removed, is attracting attention from around the city and the country.

Since we reported on the story Tuesday afternoon, the Portland Mercury, KOIN-TV and The Oregonian have chimed in. At the Mercury, Dirk Vanderhart quotes the mural’s creator, Pedal Bike Tours owner Todd Roll, as saying the decision went all the way to the top of the Bureau of Development Services, to Director Paul Scarlett.

A BDS spokesman said Wednesday morning that he was gathering details on the process and would share them with media by Wednesday afternoon.

Workers are scheduled to remove the lettering on Thursday by covering it with white paint.

“We’re just gonna paint over the words and modify the top,” Roll told the Mercury. “We’ll put our name on there and add an arrow to point out where we are, and it’ll be an ad.”

The current mural doesn’t explicitly mention the business, though the circle bicycle icon is also part of the Pedal Bike Tours logo.

At issue is a city rule setting maximum sizes for advertisements in public space. Though other billboards downtown are about the same size as the current mural, many have been operating as billboards since before the restrictions were passed.

Roll, who said he had the mural installed without city permission in 2012, points out that faded lettering still seems to be visible behind the current design. But though his company tried to find some photographic evidence that the space had been a billboard before, they came up empty.

Roll, who told The Oregonian in 2012 that “no one’s going to take this away from Portland,” says he’s developed “mixed feelings” about the sign, which has been the subject of countless photo shoots (commercial and impromptu) but also drawn criticism from some who say Portland doesn’t deserve the title.

“I also don’t like to create strife,” Roll said. “It’s caused a little bit of strife.”

Though there’s no question that the project belongs to Roll and his company, it’s clear that many people feel strongly about the display. Reactions online have been varied. Here are a few tweets we’ve seen:

@BikePortland we can't get the mural back until we deserve it.

For those of you #planners who fiercely defend rules & codes, read this. http://t.co/iu5lV1aUJq #cplan @BikePortland

"Mr. [Portland], tear down this wall!" Or at least remove that silly proclamation. http://t.co/tu04i5abkL

Is this another harbinger that Portland is losing our beloved status as “America’s Bicycle Capital?”… http://t.co/0BL9E3Wnam

The fact that it's America's strip club capital has always been way more interesting to me anyhow. http://t.co/WpZwNGTF2G

@BikePortland I'm not sure we deserved it anyway… at least not presently. @PBOT @PBOTactive

Since when does public art constitute advertising? Save America's Bike Capital mural! http://t.co/RnzZ2yvkWh

Lots of column inches for a slogan downtown, while bicycles’ loss to car parking on 28th (thanks for caving, PBOT) makes no headlines around the country.

The situation on 28th is complex and somewhat gray. This slogan is huge and sits right in downtown.

Also, if I worked at this ‘bureau of development’ I’d be terrified that this is receiving so much attention. It shines a spotlight on the idea that we’re wasting money paying people to worry about the size of some letters. Really excellent use of our tax dollars.

The worst part of this is that Minneapolis and it’s bikey residents get to chime in. As a former Minneapolitan (and a highly biased Portland raised guy), that city is just awful. The only assets that place has is a lot of nice people.

They must have done some serious work for cycling in Minneapolis because it was horrible when I lived there.

they only have such a high rating because there’s a MUP around their 10,000 lakes…

Minneapolis has a fully built, interconnected system of urban and suburban trails that makes our “40 Mile Loop” look like a joke. They are everything the Springwater is not, i.e. the lanes are wide, the users aren’t sketchy, the routes are direct, and the at-grade crossings are neither frequent nor blind.

That doesn’t include the casual-recreation and mostly-separated-from-peds paths you’re talking about. They’re the same kind of waterfront trails we have here in Portland, except much more substantial.

Well this is really a huge part of what I’m thinking of. I got a lot of texts this winter from friends talking about 14 inches of fresh snow and waaay negative temperatures and how completely miserable it was going outside. I’ll pass…

The trails are cool if somehow you can get one integrated into your work commute or over to the coffee shop or your girlfriends house, etc. But my experience was that wasn’t very often the case. I also found a lot more hostility to my being on the road than I feel here.

I dunno. It’s probably better there now because you’d be hard pressed to make it any worse.

I spent several years using the Midtown Greenway for everything: commuting, shopping, recreation, and socializing. Or at least I did every day between Easter and Thanksgiving. It’s plowed in the winter, but you have to pick and choose the days that are bearable.

They also have single track accessible in the city – something Portland doesn’t have.

(I also lived in Minneapolis for a number of years.)

I work in the building this mural graces and I’ll be sorry to see it go. It’s been enjoyable to see tourists (often carting pink donut boxes) stop for photos in front of it. I also think Todd and the folks at Pedal Bike Tours are great folks doing good work to get visitors on bikes and in this way, promote our bicycle-friendly image.

Yes, it’s an arbitrary claim and maybe an untrue one. It’s certainly never been anything more than an aspiration that can’t be proven. Sometimes I wonder if it’s even precisely what we want to be, or there isn’t some bigger goal we should be shooting for. (“America’s best city for transportation choices” or “Safest City for People Who Aren’t in Cars” doesn’t have the same ring to it, though.)

Either way, it’s an especially odd capitulation for the city to require the words be removed but not the logo. It turns it from a celebratory statement to a pure advertisement (albeit for a good business). Maybe it’s the size issue, but the PR is terrible.

Finally I’ll note that if it weren’t for another of our prodigious supply of surface parking lots being located next to this building, we wouldn’t be having this conversation at all. At the end of the day I’d rather see a building on that lot than a mural on our building.

Nobody has mentioned the irony of the sign overlooking a surface parking lot filled with cars.

…or the coincidence you and Craig were typing the same thing at the same time. 😉

Ha! I just took more words to get around to it. 😉

If I were a city planner, I’d be more concerned that valuable downtown space is being wasted on inefficient car storage.

Middle of the Road guy
Reply to  Peejay

I agree. They should build a multilevel parking structure there.

Can we get Tre Arrow to climb the wall and block it from being painted?

I wish our wimpy city officials would stand up to the greedy owners of surface parking lots and drop some serious taxes on them with the same backbone and righteousness they have in painting over this sign! They whine and cringe at the mere whisper of raising parking fees, but a new sign painted over an old sign, if it is too big, then it gets to painted over again; this time by the City and in just white- no letters! What the heck happened to the City that Works?

The city that hasn’t done much lately, but keeps making terrible bureaucratic decisions that are so obscure, the rest of the country thinks we’re a joke.

I can’t wait to read BikeSnobNYC’s take on this followed by a Portlandia skit blowing everything out of proportion.

How would Royal Rosarians do it?
just waive public process all together.
http://www.oregonlive.com/portland/index.ssf/2009/04/city_council_oks_neon_rose_ato.html

The slogan is just puffery–we see it all the time and it’s well accepted. The sign is fun and it’s sad to see it go. It will be missed.

“Puffery as a legal term refers to promotional statements and claims that express subjective rather than objective views, which no “reasonable person” would take literally.” (from wikipedia)

Meanwhile the City Hall of Long Beach, California has bike artwork and a large metal plaque stating:
“Long Beach, the most bicycle-friendly city in America”
http://farm7.static.flickr.com/6152/6182106029_7e55a22869.jpg

From aspirational bicycle capital to the “Back to Basics Street Maintenance” city.

I don’t think that’s it. Try this, from July 2012 before the current mural: http://tinyurl.com/p4xkdu6

Honestly, I think the mural is cursed. Look at how this city has slacked off since it went up. We can’t get any parking removed to install decent infrastructure. We can’t get a bike share system off the ground. We had all of the complaining about N. Williams. I wish that local government would decide that they truly want Portland to be America’s Bicycle Capital and then put a whole lot of action behind the words. Only then will we deserve the mural, and Minneapolis can have it and the curse it rode in on until then.

All this fuss (and, in the end, not a little money) over advertising, because obviously it’s easier to deal with that minor brouhaha than to do something real about making the streets safer for bicycle riders and pedestrians, right?

haha the photo makes me bust up with all them cars parked in front of it.
keep Portland mural-ed