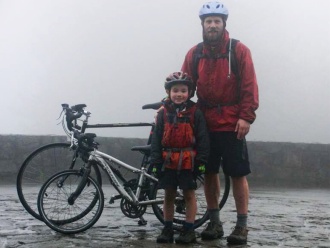 Mike Reiss and his son Jake atop Council Crest
on Saturday at the finish of the De Ronde.

The De Ronde ride attracted hundreds of Portlanders to the west hills on Saturday. The people who showed up were glutton for punishment as the legendary course rises to over 7,000 feet of climbing over only 50 miles. The course designers sought out the steepest roads and connected them all up into one sadistic route.

While many suffered, and surely many people opted to stay home rather than confront the pain, we just heard that a seven-year-old completed the entire course.

His name is Jake Reiss. His dad Mike sent us several photos and a message about his son’s monumental day:

I’m sure most of the riders saw 7 year old Jake since we started out near the front of the pack, but they won’t know that he finished since all but a few had passed us by the top of Brynwood [one of the day’s most infamous climbs]. We did see a bunch of riders on their 2nd pass down Montgomery, another few riders on their way home after finishing and a few stragglers at the finish probably waiting for rides. Jake finished at 6:30 pm, that’s 8.5 hours with a break for a sandwich and then to fix a flat. I swear he had more left in the tank than I did… 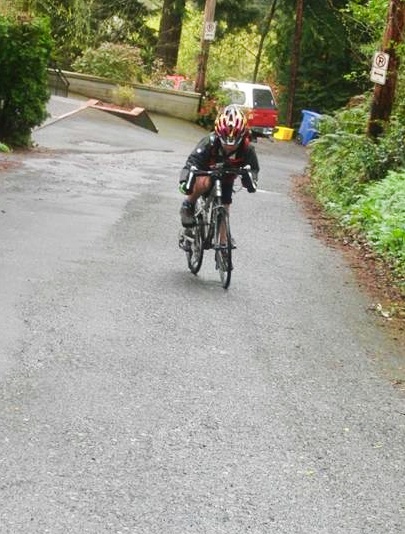 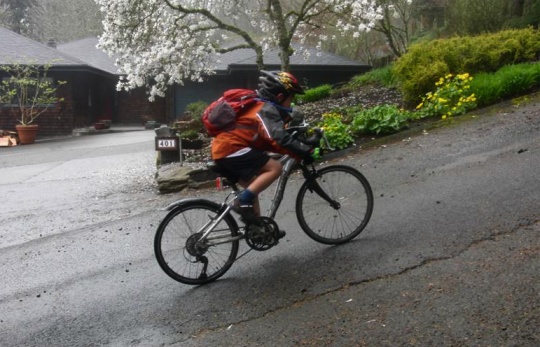 What did you think of the ride?

“It was frustrating that the ride kept sending us down to the bottom of the hill over and over each time we saw the Council Crest tower and thought we were almost done!”

Are you proud of yourself? What was your favorite part?

“I was proud that I finished because there were a lot of hills, especially those two super steep ones, they were my favorite parts of the ride.”

Anything else you have to say?

“The muck and debris on Saltzmann slowed me down a bit and I got really dirty and muddy.”

“At the beginning, I liked drafting behind the big group of people. I was going 20 miles per hour!”

“I like the weather since I was really sweaty, the rain helped cool me off.”

“I didn’t really use my drop bars much except on the super steep hills going up and the big long down-hills because I needed more brake leverage.”

“I always used my lowest gear on the steep hills, but all the other up-hills I was in 2-1”

As someone that has done that ride a few times myself, I am absolutely awe-struck that a little due like Jake made it all the way to the end — and with a smile still on his face!

Way to go Jake! And nice job to you too Mike for getting out there and supporting him.

Someone get this kid some sponsorship!

I bet that’s one proud dad. Keep it up, Jake- you could go from being a great young athlete to being a great adult athlete some day!

Nice work! When I was 7, I was sitting on my butt playing Atari…Nice to see a young fella outdoors, conquering a physical goal!

That kid is gonna clean up at OBRA in a few years.

The rest of the pack is reading this story…”what kid”…[since they never passed the lead pack (or finished).]

“…Damn, what am I going to tell my [boy or] girlfriend now…that I did not finish …but a second grader did?!” “This I tell you why professional events have they have age classifications…its for the kids’ own protection, I swear it. “

Oh man, that is amazing.

Huge smile on my face reading this. That is so gnarly and awesome, congrats Jake!!

Jake. Thanks for helping your dad get through this very tough ride. I am sure the two of you “grunting it out” together is something you will both be able to talk about for many years to come. Hope you continue to ride throughout your life. There are many beautiful places to ride.

Way to go Jake, you showed up a bunch of old folks!

Jake is awesome and has convinced me I actually need to give this ride a try myself next year.

I saw you guys out there and thought- no way that little dude is going to ride this whole thing. I TAKE IT BACK! Way to go! you can do anything you set your mind too! Way to go , keep it up. Keep surprising people, you will go far.

Wow…that is pretty amazing. The kid seems to love it.

Awesome work Jake! I saw you at the start and wondered how you finished.

“At the beginning, I liked drafting behind the big group of people. I was going 20 miles per hour!”

That’s awesome. I wonder how fast he went bombing down Cornell or Burnside. I want to see his Strava data!!!

I just ran out of excuses. And I dig that his derailleur is practically on the deck. So much win about this one.

Vote Up0Vote Down
« Black on Black Trek DS 8.5 2012
Why a woman arrested for assaulting a man with her car was let go »