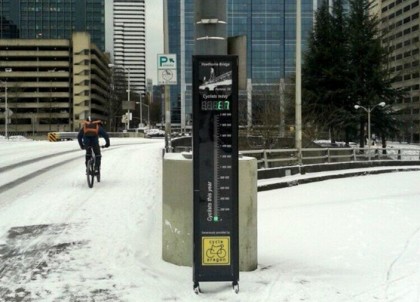 The Hawthorne Bridge bike counter on
Friday, in a lull between the storms.
(Photo by Roger Geller.)

Mother Nature finally found a way to keep Portlanders off their bikes on Sunday: a foot of fresh snow followed by a dangerous ice storm.

The Hawthorne Bridge bike counter (which was donated by Cycle Oregon) detected only 32 pairs of wheels crossing in both directions during the entire day. It’s by far the lowest total recorded since the counter was installed in August 2012.

On Friday, the counter picked up 308 bikers, the second-lowest weekday traffic to date after Christmas Day, 2013. On Thursday, when the storm hit midday, 1,773 people made it across the bridge westbound.

The bike counter isn’t perfectly precise, and it’s likely that a layer of snow and ice on the bridge dampened the bridge counts a bit. But it’s safe to say that Sunday was not a great day to cross a bridge on your bike.

Update 6:20 pm: City data collection specialist Tom Jensen writes to add: “I would think the hoses would be fine for counting unless they were in solid ice or in a couple of inches of packed snow. This morning it looked like the path had been more or less clear of snow but I don’t know when or by who (probably MultCo).”

Well, considering that the safest way to cross the bridge was to actually take the lane on the bridge deck, I am not surprised. That is what I did. The counter also may not work properly, as it uses air pressure over the tubes, which I am sure harden up in cold conditions or if ice has formed on top of the tubes. In all, it would guess that there were indeed more than 32 bikes across the bridge, though still the lowest of any day.

There has not been a similar snow/ice event since the counter was installed, so hard to say.

the counter simply did not work Sat and Sun.

Does anyone know what the County’s snow maintenance responsibilities for the bike ped bridge crossings are, as owner of the bridges? I assume they have been plowing and “sanding” the motor vehicle lanes.

I saw them plowing the bike lanes on the Morrison on Saturday morning, and they may have hit them again later in the weekend.

Thanks for the note.

I was number 26 on Saturday and I actually saw the counter change from 25 to 26. The bike/ped section of the bridge was pretty clear in the morning and it looked like they were out with the snow blower clearing the westbound approach when I was headed eastbound.

I think I was the sole soul on a cycle, Sunday, in Sherwood’s slush (say that six times real fast). I made it a grand total of 5 blocks (two to the major intersection, two back to swap bikes, 1/2 block on the icycle, 1/2 back). I have video, but it’s real boring.

This afternoon I was successful in seeking out my beverage of choice (ice tea).

My icycle’s studded tires couldn’t handle the slush. Ice would have been no problem.

I crossed both ways today. Westbound … meh. Eastbound, however, was awful.

I was going to say a couple of those were me. But I then remembered I took the lane. The deck was far clearer to ride then the path. That Path was was icy on Sunday morning. The grating on the deck was slick also but easier to ride.

only 5 at the bike valet today!

I’m hoping the next time we have snow, they plow the bike lanes on the streets they clear. Williams was plowed, but all the snow was pushed into the bike lanes. There were a few feet of standing snow and slush in them yesterday afternoon.

Take the lane. I did on NW-SW Broadway today. Even though most of the slush was gone, it was replaced by a solid layer of PBOT gravel.

Seth
I was going to say a couple of those were me. But I then remembered I took the lane. The deck was far clearer to ride then the path. That Path was was icy on Sunday morning. The grating on the deck was slick also but easier to ride.
Recommended 1

wave ur hands in the air next time seth.. haha

I crossed the bridge Friday 2/7/14 at 6.45am… magical when the cars are home sleeping and the vehicle noise pollution has hushed.

How many bikes on Saturday?

I’m curious how the counter tallies trips in real time. When taking a friend for a tour of recent Portland bike infrastructure upgrades yesterday evening I got the impression that the counter on the Hawthorne bridge was logging Westbound but not Eastbound bike traffic. We stared at it for a while with bikes heading East but the counter stayed put. It read about 3,800 around 6pm or thereabouts. Yet the daily total logged here
http://portland-hawthorne-bridge.visio-tools.com/ is in the more familiar 8,000 range. Are the eastbound trips (now) added lump sum at the end of the day? Or is something perhaps not working properly?

Well, today the counter website registers ‘incomplete data’ for yesterday. Someone is surely tracking this, troubleshooting what the problem is or might be – yes?