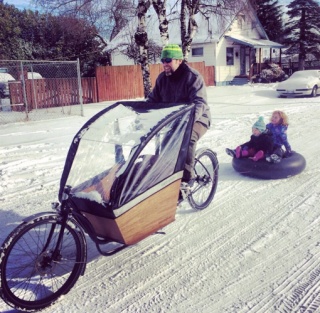 Snow! It’s everywhere and it keeps coming down! I know many folks in other parts of the country more accustomed to snow are laughing at us; but here in Portland the amount of accumulation we’re seeing is pretty rare. It’s stayed cold and dry enough for several days that the entire city is covered in several inches.

To us, this is sort of a big deal.

Parks and streets have been transformed into winter wonderland scenes and with the weekend upon us, and many events cancelled (including The Worst Day of the Year Ride, see below), people are getting as much snow-play in as they can. And for many of you, that means biking. Very fun biking.

With most people opting to not drive anywhere, the streets are nearly carfree. And there are so many people out playing on them that it’s like a citywide Sunday Parkways (h/t to Russ Roca at PathLessPedaled for that idea).

Here’s my little boy owning the road on his balance bike out in front of our house in north Portland: 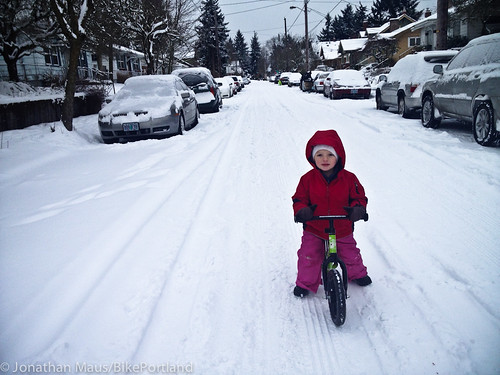 I spent the morning tearing around the block while pulling kids on a sled behind my mountain bike. And so did many others from what I’ve seen around the neighborhood and via our social media streams.

Off-road bikes and fat bikes seem to be the tool of choice for these conditions. I’ve heard Mt. Tabor is full of mountain bikes and I know of several groups that have jumped on fat bikes and headed into Forest Park. Check out the shot below from Gabriel Amadeus: 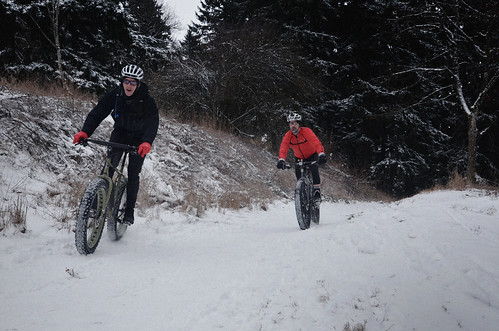 Before signing off, we’d just like to say that pretty much everything in our Weekend Event Guide has been cancelled or rescheduled. Just a few minutes ago, the organizers behind The Worst Day of the Year Ride made the tough decision to cancel the entire event (not just the long “challenge ride” as was announced Friday).

With more snow and probably freezing rain on the way, we’re far from seeing the end of these storms.

What have you been up to? Please share your experiences and any important updates on conditions or event cancellations below.

My commuter bike is a natural ‘crosser, so it was right in its element when I opened it up on an empty, nicely groomed SE 12th Ave along Ladd’s last night. 28mm slicks were just fine, there’s no ice underneath. Not everyone in the group had as much fun, though.

I’ve been having fun with the e-assist. Get the back wheel spinning fast and hold one foot out for balance. The front wheel slaloms a little but it’s faster than walking when your kids are ready to go home and sit by the fire. http://instagram.com/p/kIC5mFR1wp/

Had to work today but, because we were “closed”, I got to take my fat bike and pedal around the grounds in the snow. Best. “Work” day. Ever.

Ugh. Ice is falling now (NE) and snow is getting wet and crunchy. Tmrw roads are going to get nasty, icy, freezing rain. I fear the fun biking is coming to an end and the dangerous biking is going to start. It has been super fun.

With classes cancelled and finding myself some sudden free time, I enjoyed two rides in the snow around my neighborhood yesterday and this morning before the freezing rain came along. Simply lovely.

I understand canceling the Worst Day Ride tomorrow (especially if there is a layer of ice tomorrow), but too bad it is not moved to another weekend.

Portland is magic in the snow. I walked for hours and took hundreds of photos. Here are my favorites. http://flic.kr/s/aHsjS5Lbi6

It is times like this, when I really wish I had not sold my old mountain bike.

The snow was tricky, and fun

But now the new layer of ice, thanks to freezing rain, is amazingly slippery. I wouldn’t venture out by bike until temps rise above freezing tomorrow, unless you’ve got studded tires.

Just took the MTB with knobbies at 40 psi out for a ride around the hood.

Everything has a layer of ice. Roads packed down by cars are rideable at 5-10 mph if you are smooth and turn veeeeery gradually. Untouched snow has a thin ice layer that your tires break through and if you keep steadily pedaling in the saddle, you can make like a ice-breaker. Lumpy snow where people have walked is bumpy and sketchy.

Bottom line – ride if you are skillful or want to develop skills, but stay off slopes, plan on falling, and stay away from cars because they won’t be able to stop before running over your sprawled body. Glad the Worst Day ride was canceled!

Hopefully it will warm up before Monday’s commute. In the current conditions, I’ll be on the bus.

I think Mother Nature has finally won, guys. Literally every form of transportation (even walking) is a dicey proposition at best. Sometimes it’s best to know when to fold ’em and hope for temps to rise above freezing as soon as possible, because it doesn’t look like the precipitation will stop for a while.

I grew up in Buffalo, and rode my bike all over that city during college without any special traction devices. (A Hoffman Condor 20″ BMX vert bike even.) After walking around in this ice a bit tonight I wouldn’t think of riding/biking anywhere. There’s ice everywhere.

Even my old DIY traction tires for that (old tires with screws through them to get some traction on ice) probably wouldn’t help on this ice. Areas cars have been driving on or people have been walking on are terrible right now in the Brooklyn neighborhood. There’s at least 1/3″ of ice on everything here right now, and it’s still coming down.

I headed out for a ride on the semi-fatbike at 10pm, after observing that the ice here in Brooklyn had a pebbly texture on it, and wasn’t (yet) that slippery. Thought about heading all the way up to Mt. Tabor, but somewhere just before 11pm I noticed that conditions had suddenly changed: the temperature had dropped a couple degrees, and the previously soft 1/3″-thick ice was turning a lot more solid. Now when I was riding where the snow wasn’t packed down I was only partially punching down through the crust — but also only partially floating on top of it. That made for more effort and less usable traction.

The 3″ tire I have up front has more grip on ice than any other non-studded tire I’ve used, and I was quite amazed to find it forgiving enough that even if I braked hard enough to skid it I could stay upright. But newly hardened vehicle ruts now bounced me around and tried to knock me down a few times, so I changed course, stuck to the sidewalks (less dicey but a lot more work) and retraced yesterday’s tracks through Creston, Kenilworth, Brooklyn School and Brooklyn parks.

The ride was still fun, but a LOT more work and less fun than last night (though the roar of the fat tires breaking the crust as they rolled was pretty amazing). Maybe I’ll get the studded-tire commuter back out for ice riding tomorrow, though I suspect the thickness of the stuff under the ice crust will still make for tough going outside the packed-down areas.

I managed a ride yesterday between the Alberta district and Mt Scott/Arleta and back on my fixed cross-check, using lower pressure marathon 28’s without any real incident. I wouldn’t even try to get out there right now, though, as I would probably crash hard within the first block on the ice.

I’m curious if anyone else has had issue with rim brakes freezing up and not working? I was quite happy to be on a fixed at least for that reason.

In freezing rain, your rims will get iced up so your rim brakes won’t work well. But your tires have so little traction that even your ice-degraded brakes will lock up your wheels with little hand effort. Basically, you have only slight braking ability on ice, just as you have only slight turning or accelerating ability. Keep your speed way down.

And please be careful if riding on a sidewalk. I just saw some lady wipe out on her bike right into a guy and his little kid. Took them out like bowling pins but everybody seemed okay.