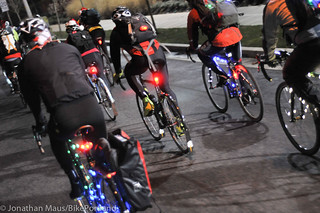 Members of the Hammer Velo Cycling Team rolled
out in the chilly night to deliver presents
to a family in need.
(Photos by J. Maus/BikePortland)

Last night a few dozen spandex-clad Santas loaded Christmas gifts into their backpacks and panniers and pedaled into the homes and hearts of three local families. It was the fourth Pay it Forward ride, an annual tradition started in 2010 by Portlander Jeff Tedder.

To help him deliver the presents, Tedder, a fit 53-year-old who owns an athletic training business, enlisted the help of three local cycling teams. Each team adopted a different family, which they found through a partnership with Doernbecher Children’s Hospital at OHSU. The families were selected by the hospital because they have children suffering from major medical issues and are of modest means. In total, about 300 people chipped in to raise over $6,000 dollars for the families.

“This gives people a chance to see that cyclists give back to the community just like everyone else… We do more than just race.”
— Jonathan Lyons

We shared a guest article about this event last year, but this time around I wanted to experience it for myself.

I met up with the Hammer Velo Cycling Team at a brewpub in Woodlawn last night. When I arrived, Tedder was there corralling his troops, several of whom showed up in Christmas-inspired costumes on bikes adorned with holiday lights. After some socializing, everyone began stuffing their bags with presents. 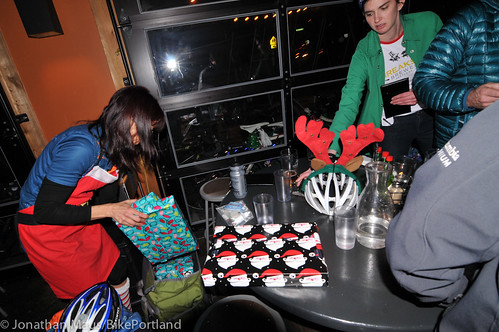 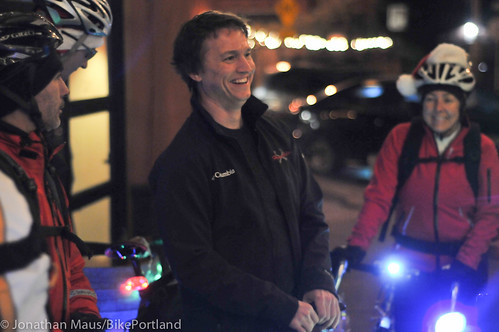 Rich Rosko, an army retiree turned bike racer who moved to Portland in 2008, told me the event is simply about giving back to folks who need it. “We all have pretty decent lives and make good livings, so we thought we’d pay it forward,” he said as he watched his fellow teammates prepare to roll out. 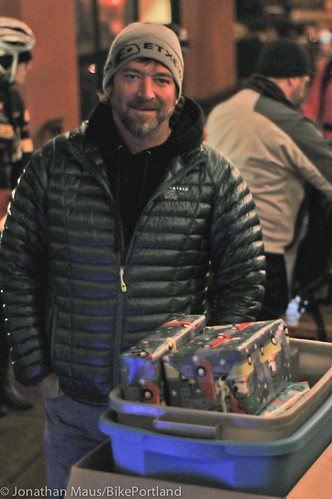 For Tedder, the ride is an inspiration from his high school cross-country coach. As a student at Rex Putnam High School in Milwaukie, Tedder said his coach would take the team up to Doerbecher to visit kids at Christmas. It’s an experience he never forgot and now, as a coach himself, he’s passing on the tradition to others.

After a pep talk from Tedder and with bags full of gifts, we set out from Woodlawn on our two-wheeled sleighs en route to north Gresham (just east of the Portland Border off NE Halsey). Along the way, I chatted with Mielle Blomberg. Blomberg raised $130 for the ride by appealing to her friends and riding buddies. “I feel very strongly about giving back during the holidays,” she said. In years past, when her finances were more robust, Blomberg and her husband sponsored a family on their own. They can’t do as much this year, but she still wanted to take part. 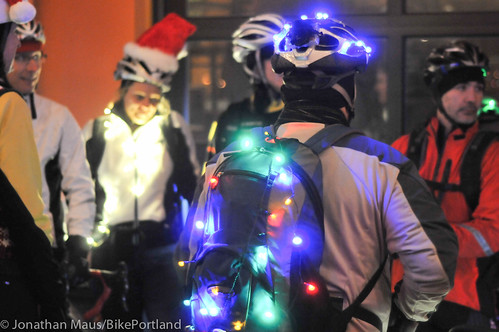 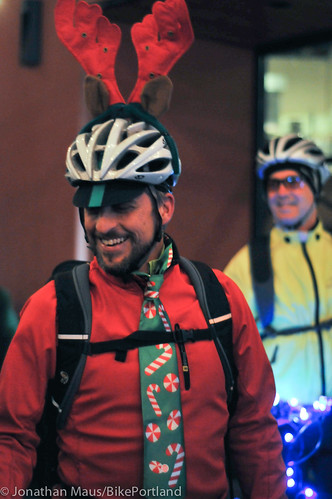 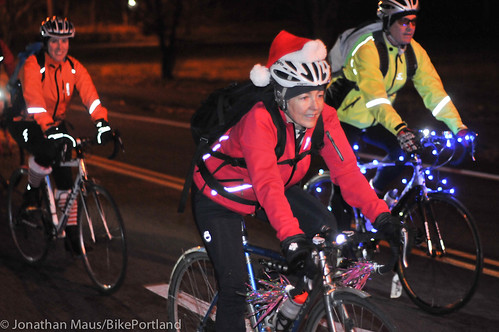 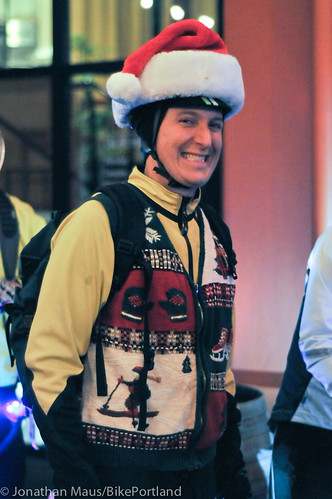 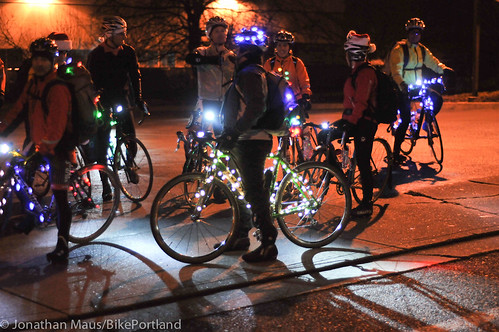 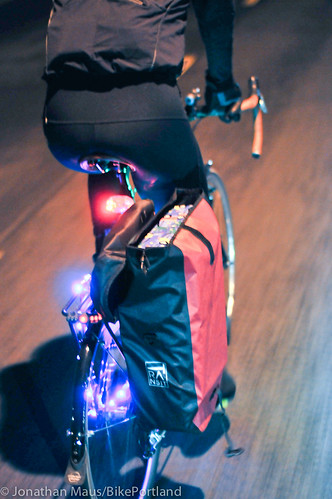 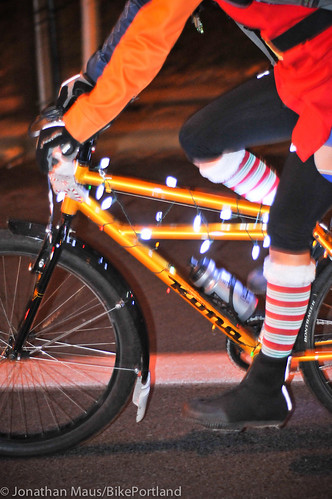 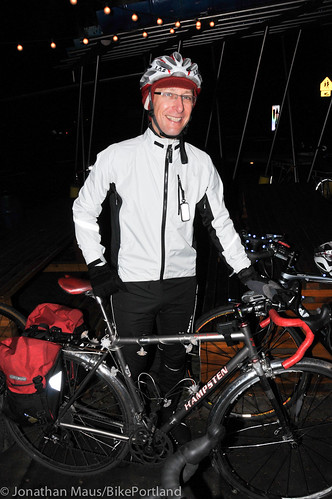 Another rider, Jonathan Lyons, an author who spent two decades as a global correspondent for Reuters News, said he feels this event is important because it shatters stereotypes. “Cyclists have this image of taking too much, being selfish. This gives people a chance to see that cyclists give back to the community just like everyone else… We do more than just race.”

After a chilly and up-tempo ride, we rolled up to a small house at the end of a cul-de-sac. Before I could even dismount, five-year-old Justin was already out on the driveway with his mom Tiffany close behind. Justin was mesmerized and excited (maybe a bit too excited, we might have overwhelmed him) by the lit-up bikes and all the commotion… 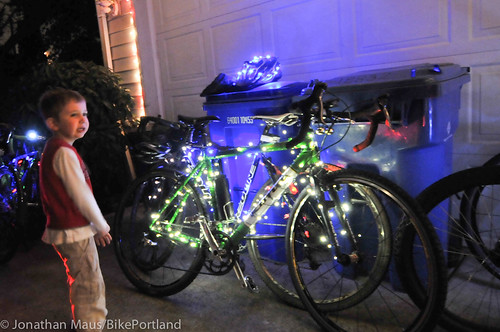 Justin was beside himself.

Imagine being five and having 20, spandex-clad Santas show up at your doorstep!

We moved inside as everyone unloaded their gifts and placed them under the tree in the family’s living room. Tiffany and her husband Justin have three boys, one of which is severely disabled with a chromosome disorder and one who has autism. As the area around the tree filled up with presents, the riders huddled in the living room and kitchen, snacking on donuts while a few folks chatted with Tiffany and introduced themselves to the boys. 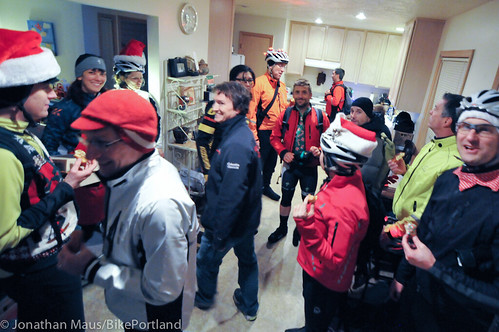 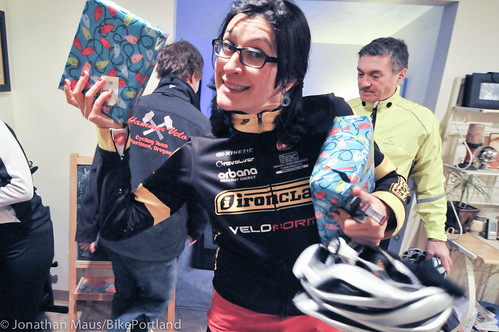 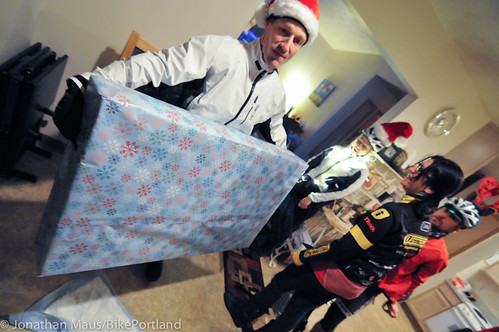 Darren Ferris with the big present of the night — a new flat-screen TV. 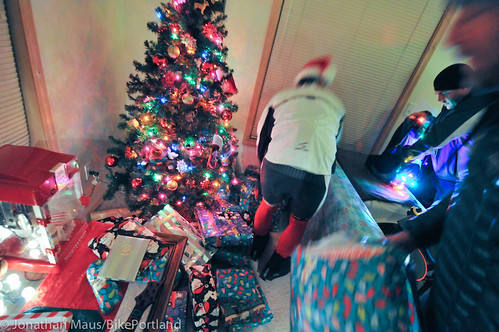 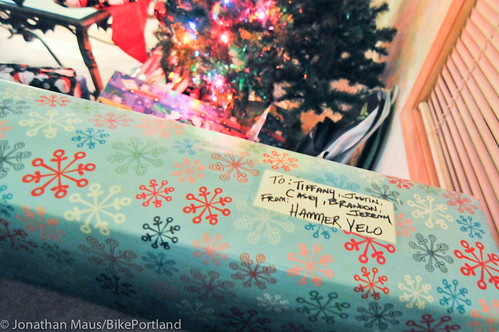 We couldn’t resist letting them open one present each: Casey got a saxophone that makes noise and lights up, Brandon got a new pair of shoes, and little Justin got a puffy stuffed animal that he quickly discarded for a string of twinkling lights one of the riders had given him. 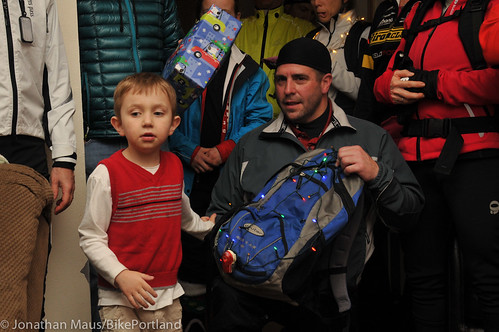 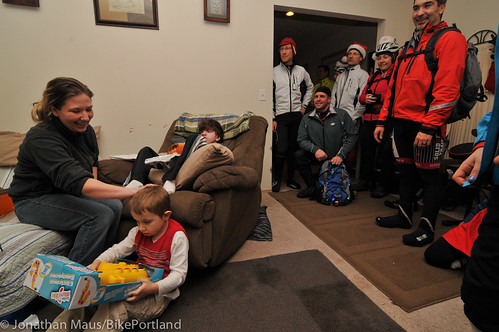 Tiffany (left), Justin, Casey (in the chair), and the Hammer Velo crew.

Suffice it to say, Tiffany (the mom), was extremely grateful. She beamed a smile the entire night and before we left she presented Tedder with a thank-you card that the boys helped her make.

This scene was also taking place at two other homes in the area last night and another one tonight. Tedder has corralled two other teams (Half Fast Velo and Oregon Bike Shop) as well as a local real estate office to join his effort. Next year he plans to establish the Hammer Velo Foundation so he can expand it even further.

The Pay it Forward Ride is another powerful example of how bicycles bring people together and make our communities stronger. The family we visited might never consider themselves or anyone they know as “cyclists” — but they aren’t likely to forget what happened last night.

That’s beautiful! I know it’s cheesy, but I love to read about the good that comes out this time of year!

Very cool–why let the motorcycle clubs have all of that fun?

Bummed I couldn’t make the ride this year, but happy I was able to provide some funds.

Great story. Tearful as well. It’s all about giving back!

Heartwarming and inspirational. Deeply moving. What a great bunch of people and what a difference they are making. XO