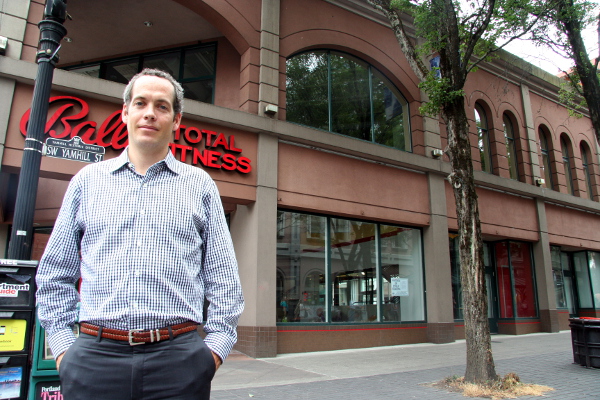 Portland’s central-city office market is soaring out of the recession, and bike, foot and transit access are driving its desirability.

An enthusiastic rider himself, Andrews has been finding bikes and low-car transportation spread through his professional life, too.

His firm is preparing to offer its fifth consecutive central-city building with dedicated bike parking, a 73,000-square-foot remodel of the former Bally’s Total Fitness building on the block between Southwest Yamhill, Taylor, Second and First, immediately south of the car-free plaza on Yamhill Street. It’ll be what you might call the first Pearl-style office building south of Burnside, with high ceilings, open flexible space inside and access to an 8,000 square foot rooftop terrace, plus some retail facing Second Avenue.

I met Andrews, 32, in May at the Portland Employers Bike Summit, where he was speaking about the importance of bike access to his projects. I followed up in more depth to get his take on the types of employers that are embracing bikes fastest and where he thinks human-oriented development is heading next.

What’s Melvin Mark’s niche in the real estate market, and how does that relate to bikes?
We have 55 people, and 70 to 80 percent of our managed property is in Portland. We take care of the buildings as if they’re ours. And being family-owned, we can make decisions based on our knowledge of the marketplace and adapt to it very very quickly.

So what’s the Portland office marketplace look for in bike amenities?
It’s gone beyond what’s cool to what’s expected. The expectation is that if you’re serious, especially in the close-in neighborhoods, that you have to have a place for bicycle storage, instead of it being, like, a repurposed space.

What’s the state of regional commercial real estate in general?
It’s the busiest I’ve ever seen our marketplace in 10 years. I think we’re an attractive alternative, not only on lifestyle, but also to locate a regional office or a second location. And you’re seeing major companies do that. Salesforce relocated. EBay is here and is growing very quickly. Walmart Labs opened a regional office here. It’s kind of countless — and it’s different from the last downturn in that most of these companies are making money. (Laughs.) And it’s the healthiest I’ve seen the entrepreneur company too. Those successes are creating successes.

What sort of buildings are best positioned to take advantage of this?
We’ve got the second lowest commercial office vacancy in the country. The closer in you are, the lower the vacancy seems to be. The new product is all under 100,000 square feet in this cool creative space. Most often it doesn’t include cubicles, and it doesn’t include drop ceilings. It’s authentic. 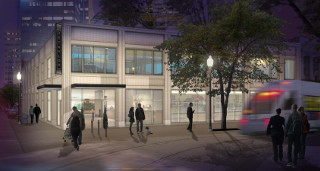 What type of employers tend to be most interested in bike-friendly office space?
It’s really tough to be a salesperson and be just bicycle-driven [so instead] it’s people who are doing websites, design and marketing stuff. Guys like Wieden and Kennedy, but there’s thousands of spinoffs. They’re doing design materials, retail setup. Portland’s full of that. Anybody that the bulk of their business is just coming into the office and spending time at a computer at one or two locations.

What do you see coming next for local real estate?
What people want is to have a lot of options, and those options continue to grow with the MAX line expansion to Milwaukie. The places to watch there are some pretty incredible infill opportunities – the Con-way site is already happening. South Waterfront – it’s right off of freeways, right off of MAX, right on the new streetcar.

And then a lot of infill. I think the densification of the suburbs is going to be the same. How do you create the feel of a downtown in a suburban area? Well, you look for areas that have those same things.

Qs & As were edited for brevity and clarity.

The Portland Business Alliance should be paying more attention, instead of continuing to try and cram more motor vehicle access to downtown down our throats.

I also wonder about this thing spreading to the neighborhoods; you know, employees like to have lots of funky options for eating out at lunch. Places like Hawthorne, Alberta, etc. have that, but they don’t necessarily have much, if any, office space for lease. I wonder if/when we’ll start to see office/retail mixed use start popping up in those corridors, in addition to the (somewhat becoming-normal) residential/retail mixed use?

This is definitely starting to happen. Not a lot yet, but a bit. Possible future real estate beat article for sure.

Yes, there is one in the works on Mississippi Ave and Cook. I believe it will be 5 stories, 24,000 sq ft. It will have bike storage and shower facilities.
http://www.officespace.com/building/42533-N-Mississippi-Avenue-and-N-Cook-Street-Portland-OR-97227

Agreed. Especially as one of the [more likely] options the city is envisioning in future growth and expansion includes massive growth along certain transit oriented corridors. (http://www.portlandoregon.gov/bps/article/449310)
The N. Interstate corridor is a prime example that is expected to absorb something like 50% population growth for the surrounding neighborhoods over the next 20 years. With some forethought, there could be a decent amount of small commercial space available in that buildout so those new residents can stay out of their cars. There will already by lots of storefront space on the ground floor of the new apartment buildings. Why not add a floor or two of commercial office space as well?
Ensuring that both the residential and commercial buildings in this buildout are bike/ped/transit friendly will be key to continuing the decrease in car use.

Gee, aren’t businesses all fleeing to the suburbs to escape Portland’s oppressive taxes:

I guess some businesses find that paying a little more in taxes is worth it (at least I hope so).

Thank yo for making me laugh!

I love the real estate beat!!

At least Walmart Labs is totally up front about equating the consumption of a product with having an actual experience.