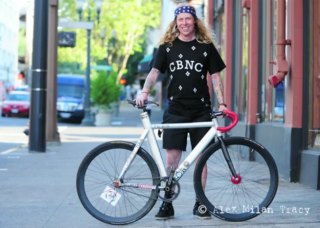 If you think urban fixed-gear riding was just some fad that has been played out, you couldn’t be more wrong. In cities all over America, urban fixed gear riding has gone from a death-defying, extreme sport dominated by messengers, to a more established discipline with organized events, races, and big-time sponsorships. And Los Angeles resident Sean Martin is one its stars.

Martin, 33, is captain of the CBNC Cycling Team and a charismatic and talented blogger who’s taking track bikes to a whole new level. His big break came last year when he was featured in Fixation, a documentary about the world of fixed gear cycling.

Martin stopped in at the Chrome Bags store in downtown Portland yesterday en route to the North American Cycle Courier Championships (NACCC) being held in Seattle this weekend. We sent photojournalist Alex Milan Tracy out to meet Martin. Watch the video below for a look at one of urban cycling’s rising stars…

Interview with Sean Martin of CBNC Cycling from Alex Milan Tracy on Vimeo.

I’ve never run into a fixie rider that wasn’t a complete jerk and didn’t leave me sarcastically muttering: “I wonder why everyone assumes I’m a suicidal idiot when I’m on my bike”.

It’s nice to see that it doesn’t apply to every fixie rider. I stand corrected.

where’s his hand brake? Didn’t PDX/Multnomah County Courts determine you need a hand brake years ago under that asinine ruling/interpretation of the law?

Sean is based in Los Angeles and technically speaking the bike you see in the interview is an Affinity Kissena track bike.

In LA according to California Vehicle Code Bicycle Reference Summary
Equipment (CVC 21202 and 21204) Bicycles must be equipped with at least a brake which allows operators to execute to a wheelskid on dry, level, clean pavement.

For Portland according to Pedal Power – A Legal Guide for Oregon bicyclists by Ray Thomas;

The 2007 Oregon Legislature amended the old law at insistence of fixed gear advocates but not to the version they wanted; instead the law now clearly requires that “A bicycle must be equipped with a brake” and then sets an easy performance requirement of 15 feet to stop from ten miles per hour that a fixed gear without a brake can beat even on wet pavement.

815.280 Violation of bicycle equipment requirements; penalty 2 (A) A bicycle must be equipped with a brake that enables the operator of the bicycle to stop the bicycle within 15 feet from a speed of 10 miles
per hour on dry, level, clean pavement.