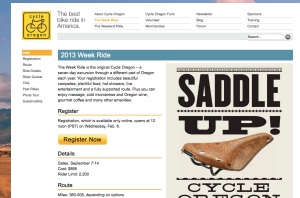 Register! Just not all at once.

The servers handling registration for the 2013 Cycle Oregon ride collapsed shortly after people started signing up on Wednesday. Now the organization is still digging out of the snafu and they hope to have everything cleaned up by Monday.

Cycle Oregon went to online-only registration in 2012 and people clamored to sign up. They filled a record 2,000 spots in just 31 minutes. With that in mind, people wanted to make sure they didn’t get left out. Cycle Oregon used a new registration vendor this year (PreRace.com), and it seems they couldn’t handle the ride’s popularity.

At 5:47 pm on Wednesday, Cycle Oregon sent out an email to apologize and update folks on the situation. Ride Director Steve Schulz told us this morning that they’ve assembled volunteers in their north Portland office that are going through each registration one-by-one to clear things up, process refunds, and so on. “Yes, it’s a bit like triage in here,” he said.

The problems were caused not only by the initial load on the servers, but as people’s registrations didn’t get through, they would try again. And again. This caused a “bottleneck situation” according to Schulz. While there have been a few people who are “very frustrated” (Schulz put it diplomatically) about the problems, about 98% have been very positive and understanding.

Schulz said they hope to have everything squared away and cleaned up by the end of this Monday. It’s been a rough couple days for Cycle Oregon and their fans, but Schulz says, “We’ll make right by everyone, we’re working as hard as we can to make things better.”

The good news is that there are still spaces left on the ride and the registration site is working fine now.

I just registered for weekend ride and had no problems with the registration process.

I was successful after the second try, but still it’s like, what, they weren’t expecting this? As you said last year sold out in 30 minutes! At least it appears no one’s getting a rude surprise since there are still slots left.

I was on to register at 12 sharp….knowing even as a 1st time participant that it sells out in short order. I felt it was especially important to be early since I have friends from around the country who were also signing up…. and I didn’t want to be left out.

Super stressful when you know it sold out so fast the year before! I don’t blame Cycle Oregon….but the company that hosted the registration was Prerace.com. These guys supposedly do this for a living. How did they not see this coming!? All in all not cool.

However, I’m sure the ride will make up for it! And it’s good to know no one got totally cut off since spots are still open!

There isn’t a modern server in existence that shouldn’t be able to handle 10 times that volume. Someone screwed up bad.

The only way I could register for the weekend ride was to have a friend do it. He signed up 9 people including us.

What I want to know is why did they change vendors? Not being able to handle that kind of traffic is unacceptable, I hope CO goes back to the vendor they had previously that got it right last year. I had trouble registering for the weekend ride. No response from PreRace tech support either, and this was a few days after the initial sign up frenzy. Eventually I tried to register again later in the day and it worked.