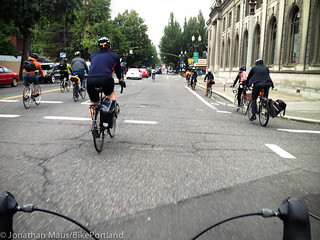 We continue to track an interesting policy development that could have wide-ranging impacts on several local streets here in Portland. As we first shared back in September, the new federal transportation bill, MAP-21, included an expansion of the National Highway System (NHS) to include “all urban and rural principal arterials.”

In Oregon, that means as of October 1st there are 600 new miles of roads that are now part of the NHS.

Locally, this means several key streets that used to be solely managed by the City of Portland are now under the purview of the Federal Highway Administration (FHWA). As such, the streets have an entirely new system of oversight, they must adhere to federal design, engineering, and performance standards, and so on. That gives PBOT much less leeway and independence to do innovative designs and to make changes to the streetscape without a potentially onerous process of seeking federal approval.

New information from ODOT about the implications of this policy make it clear that it’s on the issue of design standards where the NHS expansion could have the largest impact on Portland.

For example, among the streets caught up in the expansion is NW Broadway from SE Grand to Burnside (through Old Town). That section of Broadway is one of the busiest bicycling thoroughfares in the city and it’s a prime candidate for major changes in the near future. There has long been talk of extending the existing protected bikeway on Broadway near Portland State University up to Burnside and eventually to the Broadway Bridge. But since it’s now part of the NHS, the design of Broadway must adhere to design standards sanctioned by the FHWA. Unlike the NACTO Urban Bikeway Design Guide PBOT prefers to use, they would now have to use the federally-approved street design manual known as the AASHTO Green Book. And at this point, that manual doesn’t even include protected bike lanes as an option.

If an engineer at PBOT wanted to redesign Broadway with a protected bikeway or some other treatment that wasn’t federally approved (bike boxes and sharrows were both installed prior to federal approval), they would have to seek an official “design exception” from the FHWA.

Another issue is lane width. PBOT has been narrowing lanes to 10 feet whenever possible in order to create more space for bike lanes. However, guidance released from ODOT clearly states that NHS roadways “must have at least 11 foot lanes, and in some cases 12 foot lanes are required. Ten foot lanes are not allowed…”

One source put it this way: “When a road is designated as NHS, then AASHTO standards automatically apply, which generally require faster, wider roads.”

Beyond design standards, the new policy could impact project selection, funding, and so on.

Since my last report, ODOT has set up an NHS Expansion Working Group to figure out how to deal with the new regulations. Paul Smith, a senior planner with PBOT, is a member of the group (which had their second meeting last week).

ODOT Federal Affairs Advisor Travis Brouwer told me via email recently that they’re forming a sub-working group to look specifically at the design issues. ODOT’s Pedestrian and Bicycle Program Manager Sheila Lyons is in the group. One of their tasks, says Brouwer, will be, “Reviewing Oregon’s Highway Design Manual and recommending revisions as well as looking at the processes that may need to be put in place to ensure that local governments can move forward with projects that improve mobility and safety for all users.”

For their part, PBOT says they’re awaiting more federal design guidance and they referred me to ODOT for further information.

While ODOT is downplaying any negative impacts this policy shift might have locally and on the ability to build bike-friendly streets, other sources aren’t so sure. “This could be a major disaster and set context-sensitive design and the needs of pedestrians, bicyclists and transit users way back,” said one former ODOT staffer. “Whoever told you this wasn’t a big deal, doesn’t understand how design standards work or how engineers think… Trust me – this is a very big deal,” said another source.

At this point, the hope is that PBOT’s Paul Smith and bike-sensitive ODOT staff have strong enough voices in the process that the ultimate guidance and policy going forward is more flexible than it is now. Stay tuned.

— Learn more about the NHS expansion via this special page set up by ODOT.

And with a Republican controlled House, too. Amazing.
Thanks for staying on top of this.
Hole-in-the-Air, Level of Service, and now this….

The Democrat controlled Senate passed this thing too, it is totally bi-partisan. Thanks Harry Reid!

I’d agree that many politicians’ words not matching their actions is bipartisan, but reducing federal governance of local matters has certainly been a talking point for R’s.

I guess we’re just gonna have to secede.

Yes, this is a big deal and I’m glad ODOT and PBOT are working on a strategy to overcome these new challenges.

Sounds to me like the folks at PBOT need to start putting together a strategy to successfully apply for “exceptions”.

If I was a bettn’ man I’d say that this is a long range strategic move by freight interests in Portland to hamper the “bike-ification” of streets that are easy to deliver to.

Silver lining? Something may be done about the worlds most ridiculous urban stop-sign.

it has already been the case that PBoT needed to comply with AAHSTO standards or seek an exception on any project that received federal funding. this for example is why we have sharrows on side streets rather than more appropriate wayfinding markings.

What the car industry has realized, and the bike industry has yet to realize, is that favorable laws, quality infrastructure, and public opinion are crucial to their bottom line.

The AASHTO Green Book is b>quite a bit more expensive ($250) than the NACTO Urban Bikeway Design Guide at $50.

Still looking for a free or freely accessible version; it should be a more enjoyable read than the <FWHA’s roundabout guide and Machiavelli’s “The Prince” put together.

“Another issue is lane width. PBOT has been narrowing lanes to 10 feet whenever possible in order to create more space for bike lanes. However, guidance released from ODOT clearly states that NHS roadways “must have at least 11 foot lanes, and in some cases 12 foot lanes are required. Ten foot lanes are not allowed…””

Sure. If you’d grown up in Germany, our expansive landscape would seem like, well, the prairie, or the steppe, or whatever term you prefer for lots of extra space to spread out.

Is there a better map of the roads effected than the one found at:

Because on the above map I don’t see how your example on Broadway is effected by this. And really I don’t see where it effects much of the current bike system at all, short of some of the West side highways like 30 which see a lot of bike traffic.

The concern is mostly about how this affects our ability to provide bikeways on these streets in the future. The idea of a Sandy Blvd bikeway always grabs attention, but if meeting federal standards for performance and design was required, it would probably be impossible to create.

Man. This does not bode well. You know, we are going to have to get some people up high to really fight for progressive transportation policies to stave off this backward road thinking and policies. Here’s praying.

It’s pretty funny that yesterday as I rode behind a store in its delivery/alleyway to avoid a major road, I had the feeling I was still sixteen years old riding to my first job-cutting through back-ways and riding sidewalks. Whoa, I’m still riding like this! Twenty years later! Wow.

Anyway, I hope we have some good local leadership to combat this.
It’d also be nice if we had more really good off-road bikeways, like the Springwater corridor all across town. Things like Sullivan’s Gulch and North Portland Greeenway, and many more. Those projects just also seem like they take for-freaking-ever as well.

“I had the feeling I was still sixteen years old riding to my first job-cutting through back-ways and riding sidewalks.”

Um, not to create awkwardness or anything, but…I think that’s how a sizable chunk of society still sees you (and me) when we ride anywhere, not just back behind by the loading docks. I think that’s one of the main reasons bikes are seen as “weird” and “alternative”, and whatever other euphemistic or pejorative term you want to use–Americans are still supposed to “outgrow” bikes and move on to grown-up transportation. You know–cars. Or better yet, giant diesel pick-ups and SUV’s. That’s why money to spend on providing bikes better access to the major roads is often hard to find. To many, spending money like that is the same as spending money on a skate park or playground–except that those things are “for the kids”, so they are actually more well-received.

ODOT could condemn or buy the buildings on NW Broadway to make room for 10-12 lanes, two of which could be for bikes. Why wouldn’t that work? It’s their modus operandi.

Might not be so bad, and if played well could give us some Fed. money for some of the bike improvements.

Looking at the MAP-21 Presentation site:

There are allowances for the Safe Routes to School program. Which falls under the Transportation Alternative Program which does have allowances for bike paths. Bike improvements could be a pretty sell on to some of the streets like Powell since there are many schools on or near it. Not so sure about Sandy or Broadway.

And honestly I don’t see where the TAP program has to be a “Safe Route to School” issue. Just a casual glance at the pages makes seem like we could get some bike/ped. improvements without spending as much local money for them, thus freeing up the local money for some of the other projects in the area.

It just might be perfect, since we are already one of the Fed’s favorite cities for alternative transportation funding.

It will be interesting to see what happens as the dust settles.

Thank you Jonathan for shedding light on something very important. The fact is that, more than any other factor, our wasteland of an urban landscape is the end result of the FHWA. The FHWA was created to help build the inerstate highway system, a system that to this day creates wide swaths of land which is off limits to pedestrians and bicyclists, and much wider swaths of land which may not be off limits by law, but are off limits because they are unsafe. The FHWA is a slow growing cancer waiting for a cure. Their evil is masked by the fact that they throw an occasional funding bone at transporation schemes that appear to offer an alternative, but in reality pose no threat to their goal of burning more oil, which in turn creates more taxes, which in turn creates a bigger highway bureaucracy called the Federal Highway Administration. I pray for a cure to this cancer.

This can be dealt with by deleting streets from the list of “principal arterials” as needed. Unlike state, US, and Interstate numbered highway designations, the locality gets to decide what’s a principal arterial, if I am not mistaken.

Sue them. You can prove your design is more suitable and safer, easily.

The stolid movement of their design approval alone would make any judge cringe.