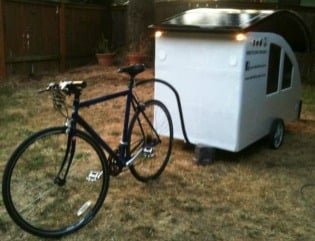 The BikeRV is now rolling the
streets of Portland.
(Photos: Alexander Main)

26-year-old Portland resident Alexander Main wants to change the world by building tiny houses that can be pulled behind a bicycle. And he just finished his first prototype — which is a good thing because it’s also his home. Main moved here from Germany just over a month ago and set out to build what he refers to as “the first of its kind self-sustainable solar powered Bike RV Trailer!” (and yes, he’s very excited about it).

The BikeRV was built to be simple and inexpensive and Main plans to publish the plans and materials list free on his BikeRV Project website. “I want people to copy it, to improve it and to use it as an inspiration to create better models,” he says.

Main came to Portland with just a suitcase filled with a sleeping bag and some clothes (“I got rid of everything,” he says in a video blog posted last week). Currently, he’s “yardsurfing” and testing out his prototype BikeRV for the next month.
As for the RV itself, it’s a pretty nice set-up. He’s built it with a 50 watt solar panel that powers a 10 amp/12 volt battery that powers several lights — both inside the RV and head/tail-lights for safety in traffic. Main can also charge up his laptop, cell phone, or anything else that can plug into the standard 12 volt outlet he’s installed on the BikeRV (if it’s cloudy, he’s also installed a 120 AC power inlet). The BikeRV attaches to any standard bike via a seatpost hitch mount.

Here are a few photos from the project’s Facebook page… 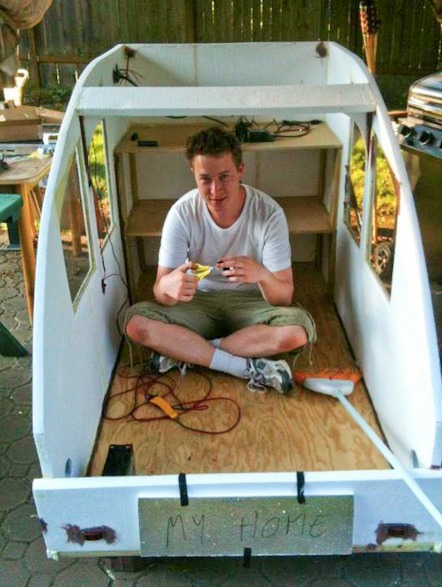 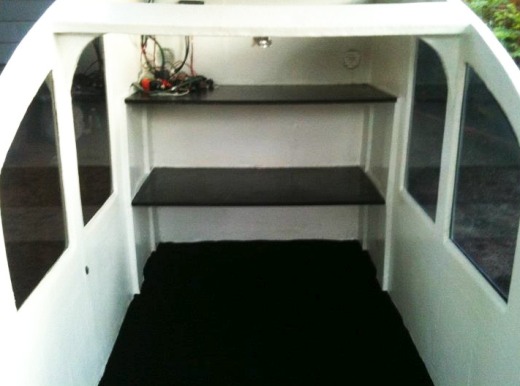 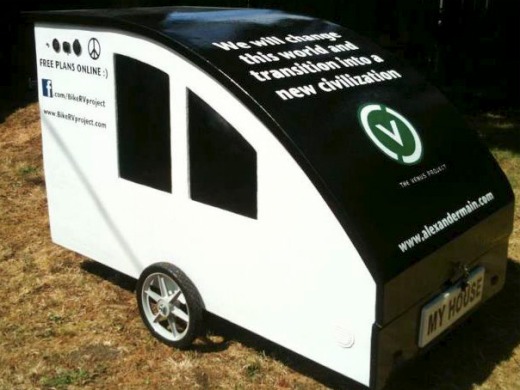 Far from just building this for himself, Main wants his project to, “popularize the concept of minimalistic – low cost houses, which people can carry around with their bicycles.” Here’s more from his website:

“A Bike RV offers an alternative way for inexpensive survival. It can cover the most basic needs such as a bed, protection against high or low temperatures and – depending on the model – free solar energy. Such energy can be harnessed to power electric devices or even an electric engine. Due to its obvious limitations, a Bike RV is not intended to be a long-term shelter solution, yet, within its limitations, it can be a life-saving option…

The Bike RV Project has the potential to help millions of homeless (houseless) people across the world, in fact, that is the greatest motivation for me to do this.”

Main hopes collaboration with others will lead to even better designs in the future. He’s active on Facebook and posts regular video blogs on YouTube. In the future, Main says he might launch a Kickstarter campaign to help raise funds (he spent every penny to his name to complete this prototype).

Check out the BikeRV Project website to connect with Alexander and stay updated on the project.

Of course no mention of a bike-powered home is possible without remembering our old friend Brian “Motorhome bike” Campbell.

I’ve been waiting sooooo long for one of these…Kickstarter campaign please!!

What I really want is an electric assist pop up r.v. camper bike.

I’ve seen a guy (presumably homeless) in one very much like the one above parked along the Springwater Corridor. A trend in affordable housing?

After seeing Mains set-up, might just build a pop-up for 2…cozy, comfy, who knows…we don’t really have to tow everything with us, and we’ve been wanting to travel…MMMMMMMM

Even though these ultra tiny houses aren’t for me (I rather like my modest townhouse) I can see how things like this could be applied for other uses. Long distance bike trips for example.

Are those wheels hard rubber?

Just needs a rack for the mountain bike. Head to the mountains, set up camp, ride your @ss off, ride back “home” to PDX.

As for somebody that has bike toured and along the way have stopped at some BLM land or someones yard for a few weeks and months this would be great to have. It is something that obviously you are not living in but allows you to live literally out in the wild more comfortably, cleaner, and with more amenities than you can pack on Panniers.

Have to applaud creative enthusiasm and innovation. Cute little mobile tent. Eye catching pitch on its exterior. Wheels do look as though they could use some beefing up. As to the practicality of living in something like this, in the city, an update sometime in Dec-Jan-Feb-March, could be interesting. Most likely better than lying on a piece of cardboard in a doorway.

I don’t think it would be too bad with a sleeping bag. I go camping year round in ventilated tents, so…. What one needs to do is build with reflective foil insulation which will retain body heat, laptop, & lightbulb heat etc., remarkably well. I’d also carry some lightweight camoflage netting and darken out any reflective materials, to help avoid anti-camping gestapo.

I love it. Nice design, and well thought out. I bet it would be more stable with a BOB-style axle mount rather than a seatpost mount, though.

Get a sewing machine! replace the rigid foam with a good fabric – there are plenty out there. Next, find an old Burley kid’s trailer, study how Burley put it together, then go to HOME DESPERATION and purchase good conduit. Bend the steel (then coat it/paint it – rust avoidance), drill a few holes, sew the fabric, hook it up to your bike, and then go! No welding – bolt it together (use a lot of lock-tight and carry a wrench). Most parts can be scavenged. Don’t skimp on the nuts, bolts, and washers – only use stainless steel – not a big cost because you don’t need many. FOLD AND GO! I did it for years with two (2) fifty pound kids behind my road bike. Be conservative about what you pack, and you can go for ever (I’m a New Yorker…. foreva and eva….) with less weight and much better efficiency than anything else on the road!!! Good luck!

Shouldn’t the round part be in the front to cut down wind resistance?

I salute the intent and motivation here, but how heavy is this thing, especially when loaded? I can see using it for temporary housing (post-Cascadian Subduction Zone earthquake, perhaps?), but for touring? No way.

To the skeptics — note that weight just makes you slow down and enjoy the scenery a bit more. Weight only matters when accellerating or going up hills, which is only some of the time. & at the speeds you’ll go, there’s not much wind resistance penalty either.

I’ve been carrying stuff around on a bamboo cargo trailer for 2 years now, it’s lots of fun, you get used to the extra weight pretty quick. & though it’s a drag going up hills, you get near 100% return-on-investment when you go back down.

hey guys !!! I’m Alexander Main, thank you so much for the comments! I will take notice of all suggestions to improve the model !! Please remember that this is an open source project and anyone can contribute to make better designs ! please join the Facebook Group: https://www.facebook.com/groups/222285831225567/

For the ones asking for a Kickstarter Project, YESSS !! I’m planing to do that too !!!

Thank you guys for the comments, support and love !!

I love it! Perfect match for my electric bike 🙂

have you considered to build a trailer that can be folded down for touring? Something similiar to a tent trailer. It should reduce wind resistance, add more visibility in the back, and allows better mobility. I am just saying.

Agreeing with o/o, a bike-sized pop-up camper could be the cat’s meow.

The shape looks like it was made for cars. Swap the trailer hitch to the other end so it’s more aerodynamic. It looks like towing a parachute at the moment. Cool idea though!

What about a pop up trailer that goes down flat? less wind resistance means more miles traveled.

He needs some help very quickly, can anyone assist? He is leaving tomorrow for Germany and doesn’t have a place to store his RV until he gets back.

this is indeed a very cool idea and we are seriously developing something along this line. Be sure to check out our web site at:
http://www.ufocamper.ca

We have two bicycle mini camper designs in the works and we are currently working on trying to raise funds through our IndieGoGo campaign to make the first prototype. Help us out and we can make this dream a reality:
http://igg.me/p/232699?a=1300437

It’s a fun idea and it’s been done before but realistically it’s not permanent housing. I love the idea of living cheap and with freedom but where do you actually live? In the parking lot where you work? Sadly society will look at this concept as homeless.

A number of years ago (probably 20 or so), I definitely would have considered making one of these, and using it as my home on wheels to bicycle across America! However, I would install a lock (lockable from either inside or outside) to feel a little safer. Nice concept. Wish I would have encountered this idea when I was still young enough to have seriously considered it!