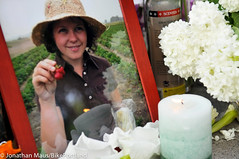 A photo of Kathryn at a makeshift
memorial on the corner of
SW 3rd and Madison.
(Photo © J. Maus/BikePortland)

Friends of Kathryn Rickson, the young woman who was killed while bicycling on SW 3rd and Madison last week, have launched a fundraising effort.

One of Kathryn’s friends got in touch with me to share that a page has been created on ChipIn.com to handle the donations. So far, $545 has been raised. Kathryn was a student at Portland State University who was working odd jobs. Her partner, Ryan Gaughan, recently lost his job at New Seasons Market. Ryan also has a seven-year old daughter named Madeline.

The funds will go to Ryan and Kathryn’s family to help pay for a memorial service that is being planned for next month. Kathryn’s family lives in Rhode Island and will be traveling to Portland to attend the service. Any additional money raised will be donated in Kathryn’s name to non-profits she was passionate about.

Meanwhile, the police investigation into the collision that led to Kathryn’s death is still ongoing. A Portland Police Bureau spokesperson told me today that they are still “a couple of weeks away from having the investigation completed.” Time is being taken to track down possible security camera footage on nearby buildings and the PPB must also wait for lab results to be processed. After that, the investigation will be forwarded to the District Attorney’s office for review.

— For more on Kathryn Rickson, browse the archives.

BTW… Cell phone records should be collected regardless of other issues like a blind spot. When I’m on a bike I see cars acting crazy, and when I look at the driver I see the cell phone in their hand. It may not be related to this, but everyone deserves a fair trial, and the dead deserve a complete one.

What a tragedy, my thoughts go to the family and friends who lost a wonderful woman in their lives.

Please know that I am watching these comments closely and I have no problem deleting them. I’d rather not see a debate about the New Seasons/Ryan Gaughan story here. Like peejay says above, please be sensitive and remember that Kathryn’s family and friends are very likely reading these comments.

UPDATE at 12 noon on 5/24: I have deleted several comments and have closed commenting at this time.

Jonathan, let me know if this is not the appropriate case to ask this question: after reading that the driver in the SW crash yesterday was cited the same day as the crash, I’m wondering about the status of this investigation, which hasn’t yet seen a citation, I believe. Do citations ever come this late?

When someone dies in a collision (vs. just having an injury), everything is different. It’s common for the police to not issue a citation because they do not want to impact the upcoming DA investigation. Not to mention the fact that emotions are just much more intense. And culturally, I think we (our society and the police) do not feel like issuing a citation in this case because there’s a sense that it was just an “accident” and that a citation is just bad form when the driver is already distraught over what happened.

And yes, citations do come late in some cases. In the Tracey Sparling case, the PPB issued a “Failure to yield” citation over 3 months after the initial collision. See my recap of that story here.

Thanks for explaining this. I appreciate it.