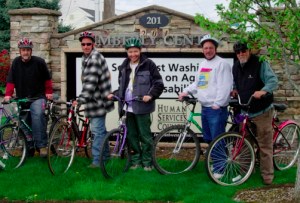 [This story was written by Madeleine von Laue.]

A Vancouver woman has a new job and a new bicycle to get there, thanks in part to a new program that helps job seekers and low-income adults in SW Washington access bicycles for transportation.

Vancouver and Clark County have had programs to help school children get bicycles and ride safely, but nothing for adults. That changed last year when the Human Services Council received a grant from the Washington State Department of Transportation for an innovative ‘Bike to Work’ Program.

“This was definitely a life changer,” said Shari Brown, who moved to Vancouver a year ago from Texas. “It really opened up doors for me. Now I can feel confident and positive that I’ll be where I need to be, like at my new job.”

“I got a job! I made it to the interview, to the orientation and now to work. If it weren’t for the bike, I wouldn’t be able to do it.”
— Shari Brown

The HSC is a community non-profit whose mission includes providing transportation services to low-income adults, seniors, people with disabilities and other at-risk populations in SW Washington. Its “Bike to Work” program was the first of its kind in Washington and received an award from the state last year. The program has also generated interest on the other side of the river, Portland, which is usually ahead on bicycling issues.

“It’s been so exciting, having this program take off,” said Colleen Kuhn, HSC Executive Director. “Not only are we providing transportation to people, the bikes also help them get healthy and give them independence.”

HSC initiated the program at the urging of its community partners whose clients were asking how to get a bicycle for transportation. “People told them they ‘would love to ride to work!’” Kuhn said.

Brown was one of those who learned about the initiative from a job counselor. “I told her I had a job interview that was a mile from a C-Trans bus stop. ‘I’ll walk,’ I said. ‘You can’t do that,’ the counselor said, and told me about the program.” 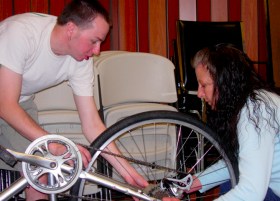 “Bike to Work” gave away 20 bikes in its first five months. The bikes aren’t just for the asking though; to get one, applicants must go through an extensive screening process. It starts with the referring agency which assesses whether the client would be a good candidate for a bike, such as his/her health, experience riding and sense of responsibility. The clients who fit the criteria then fill out an application with HSC.

For those who are accepted, the next step is a bike fitting. Clients are referred to Bad Monkey Bikes, a downtown shop that works closely with HSC on the program. “It shows a level of commitment if they make it there,” said Kuhn.

The bikes are ‘foundlings’ from local police, fire and sheriffs’ departments. Many of them need work, which is where Bad Monkey’s comes in, again. The shop repairs the bikes for free, charging only for parts and a safety inspection. The mechanics also provide follow-up maintenance for recipients. “They’ve been awesome to work with,” said Kuhn. “This wouldn’t be possible without them.”

Bad Monkey’s values the collaboration also. “It’s a good use for bikes that people donate to us, and a great way for our interns to learn about bicycle repair,” says owner Wade Leckie.

Leckie remembers one man who had just moved here. “His life had fallen apart. He learned the city by bike and got back on his feet. He even donated his bike back to us after getting a job so someone else could have it.” Another recipient did odd jobs for the store in exchange for bike parts. 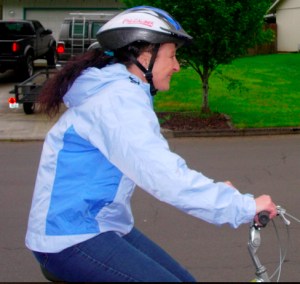 In addition to Bad Monkey, the program has a number of other partners. The county sheriff’s department donates helmets, and local government agencies provide maps and reflective tape. “It’s a great example of a true community program,” said Kuhn.

As for the potential bike owner, they must first attend a comprehensive five hour training that includes bike maintenance and repair, route finding and safe cycling. The training ends with a three-mile ride.

On the road, Michael Kelly and Maggie Lund, transportation specialists with HSC, lead the recipients first through a quiet residential neighborhood and then onto a busy road. They model signaling and practice turning left across oncoming traffic, lane changes and making eye contact with motorists.

At the end of a recent training, Brown mounted her new bike with confidence and rode off. Her last words that day were “This is great! Thank you!” But a few days later she called, even more excited. “I got a job! I made it to the interview, to the orientation and now to work.” Her shift begins at 5am, and buses don’t run that early. “If it weren’t for the bike, I wouldn’t be able to do it.”

Next, VANCOUVER will pass Portland in the bike rankings.

Haha! It’s nowhere near as bad as some Portlanders make it out, but don’t lose any sleep over that possibility. 😉