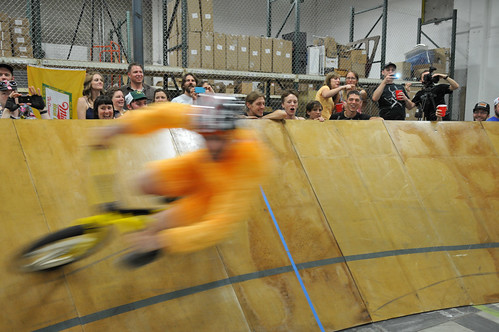 The race was held in the warehouse of Portland Design Works.
(Photos © J. Maus)

The first-ever, head-to-head race on a mini-velodrome known as Circulus took place on Saturday night in a warehouse just off of N. Williams Avenue.

Local bike company, Portland Design Works (PDW), hosted the race and party in their warehouse (with sponsorship help from Yakima Products, Inc). It was the first and last time the Circulus will be open to the public at this location. The track is set to be disassembled and then rebuilt on the floor of Interbike in September. PDW is growing and they need the warehouse space for storage; so after Interbike, Circulus will need to find a new home.

The warehouse, with its high ceilings and industrial, cage-like atmosphere was the perfect setting for the event. Fueled by free beer and music from a DJ, throngs of spectators stood around the track on stacks of wood pallets or lined the edge so they could pound the wood as racers went by. See what I mean in the video and photos below… 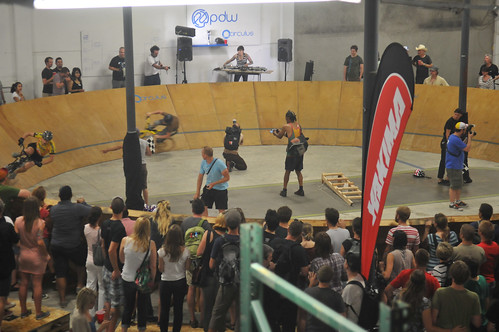 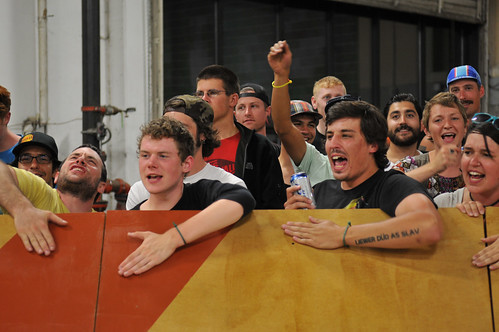 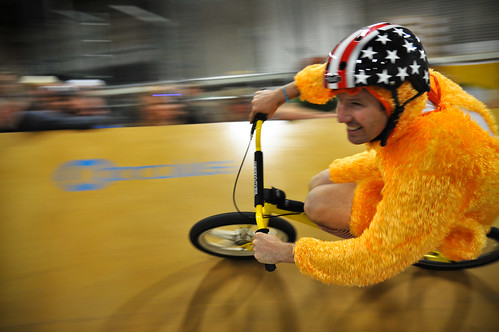 This is Portland Design Works co-owner Erik Olson in a chicken suit. 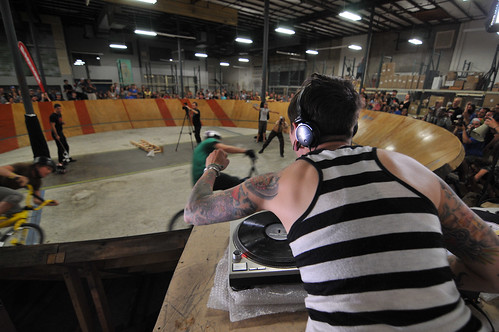 DJ Amanda Sundvor manages to keep the beat going and heckle riders at the same time.

Before the night’s main event, Circulus was open to anyone to try. When I first met Circulus a few months ago, I was too chicken to try it. But Saturday night, with a helmet and a bike just sitting there, mocking me, I decided to give it a shot… 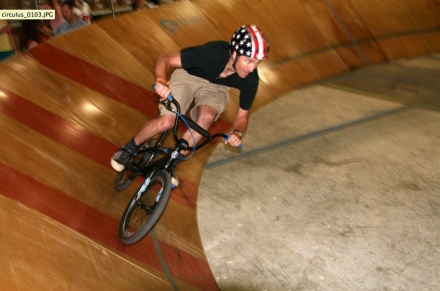 What a sensation! I was nervous the entire time (even though I tried to look calm) and dizzy when I got off; but I managed to conquer Circulus. I zoomed around the steep, 45-degree banked track on a 20-inch BMX bike and somehow kept the rubber side down. The trickiest part is stopping. There’s no convenient place to roll out, so you’ve got to just hit the abrupt transition back onto the floor and hope for the best.

Trying it myself gave me much more respect for the daring and skilled competitors that followed. 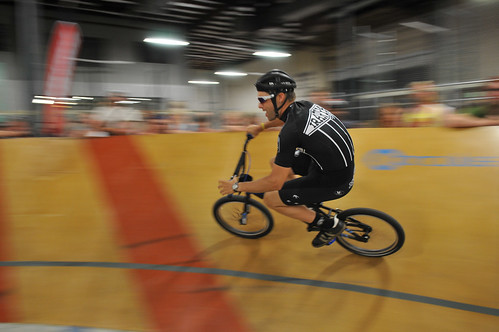 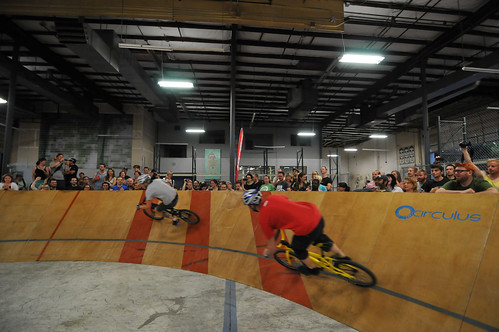 The female winner, Caroline (yes, that Caroline) raged against the track and took home the top prize; but not without sacrificing a bit of skin… 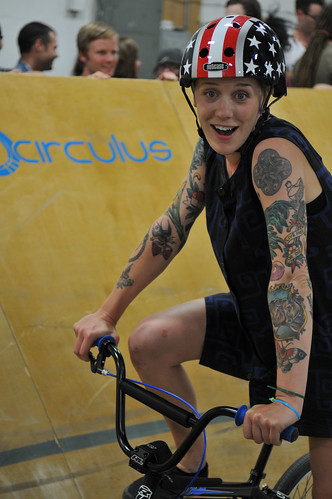 On the men’s side, Paul Johnson (of local bag company Blaq Designs) was the fastest on the night; which wasn’t a surprise to anyone that saw him warming up. Paul rode with aggression, pedaling and pumping his bike as if he wasn’t even on a slippery, banked surface. 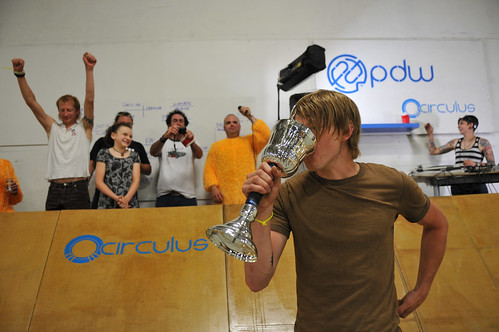 Paul and the spoils of victory.

Thanks to PDW for hosting. They don’t plan to sell Circulus, but like I mentioned above, it does need a new home. Any takers?

More photos in the slideshow below…

Thank you to everyone for stopping by on Saturday. We were stoked!

Thanks for the write up Jonathan, glad you finally got to take a few spins on Circulus.

Also, the men’s winner was Paul Johnson of Blaq Designs.

2 for 2 on bitchin pdw warehouse parties, you guys are the best!

Thanks to everyone for making this happen! Everyone I talked with had an amazing time, me included. My pink jersey was supposed to be a joke but I think it’s going to be my new training jersey.

Very cool — too bad the first event was also the last — after posting that video I think they could get more spectators. This would be great on a cold winter evening…

It’s only the last at that specific location… I have feeling it will find a new home in Portland and the racing will continue!

Just the last at our space. I think Circulus is going to have a very interesting life…The track is about to take a little road trip.

Holy cranks! I never knew the track was so steeply banked.

JMaus – thanks for the great photography and superb article!
A VERY SPECIAL THANKS goes out to Yakima and the PDW crew: DPow, Capt EO & The Murph for putting on and hosting such a glorious event!

My entire family enjoyed the evening and all look forward to the future of CIRCULUS!

Just curious…it looks like all BMX bikes on the Circulus. Any reason for that? How do track or road bikes fare on it?

You can ride anything you want on Circulus: track, road, bmx, cargo bike. However, for our event Saturday we wanted head to head racing on equal, stock bikes. 20 inch bikes also have a pretty low center of gravity. We also wanted anyone who came by to be able to participate as safely as possible.
BMX made the most sense.

Track and road bikes are really fast. You cover ground so quickly it is hard to see far enough ahead to feel comfortable.

Thanks, dp, that makes sense. It looks like a blast!