[News intern Alaya Wyndham-Price spent the recent holiday in Walla Walla, Washington. She checked in on the local bike scene and shares her report below.] 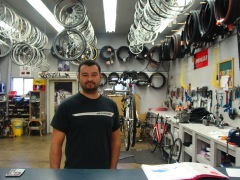 Like Portland, it snowed in Walla Walla during the holidays, about four inches of the white stuff fell and then slightly froze to the ground — typical weather for this small valley town in the foothills of the Blue Mountains, about 250 miles from Portland. The town of about 58,000 is best known for farming, college, and wine.

I’ve been visiting Walla Walla for seven years now, and riding around the area, particularly on the trails outside the town proper. But it wasn’t till this trip that I realized how invested in cycling the community is here. 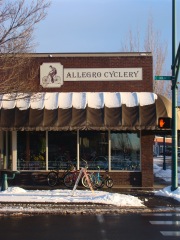 Walla Walla’s bike culture is centered primarily around its two bike shops: Allegro Cyclery on 2nd Avenue and Spokane, and the Bicycle Barn on East Isaacs.

Allegro is relatively new to the area, having been open for four years. Owner Steve Rapp told me he opened the shop when he, “saw an opportunity because a section of the market wasn’t being tapped into very much.”

Walla Walla was losing some of its bike business to the neighboring Tri-Cities area, Rapp said, because people like to compare products and prices. Only having one bike shop in town wasn’t as productive to the local economy.

Having two shops, with each specializing in different brands, created the right level of competition to keep the bike money local, helping both shops and Walla Walla’s economy.

Bicycle Barn has been a local fixture since 1974, owned by Greg Knowles, and housing a 19-year employee, Tim Hulce. Both shops host bi-weekly scenic, recreational rides that form the backbone of the local bike scene.

Employees from both shops ride together on the Wheatland Wheelers, Walla Walla’s premier racing team, circa 1982. The Wheatland Wheelers team is making huge strides in Washington State. Several of its members having been state champions over the past 5 years in either road racing or time trials. 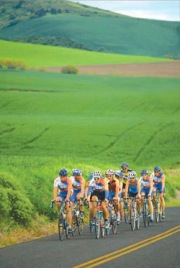 “Eastern Washington is finally on the map,” said team member Reggie Gonzales, who by day is a mechanic and sales person at Bicycle Barn. “When we show up, other people take notice now.”

The Wheatland Wheelers train, take on a group of junior riders from the local high school, and still have time to sponsor and host the annual Ann Weatherill Cycling Classic, in honor of a local schoolteacher who was struck and killed while riding on Mother’s Day in 2004.

The January ride raises money and builds awareness about cycling safety, and has led to a partnership with the state to pass the Ann Weatherill Safe Passing Act in 2005; the Bicycle Alliance of Washington aims to clarify the law by specifying a three-foot passing rule in 2010.

Allegro Cyclery sponsors the Tour of Walla Walla stage race, which was started by Rapp thirteen years ago, and has grown from 68 riders to 530 this year, with participants coming from the entire Western United States and B.C. The 2010 Tour of Walla Walla will be April 16 to 18 if you are interested, see Allegro’s website for details. Allegro also hosts the Walla Walla Cyclocross, races four & five of the Inland Northwest Cyclocross Series. The Wheatland Wheelers participate in both events. 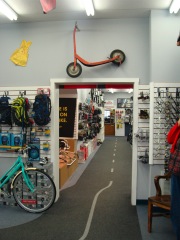 Another force on the bike scene is Whitman College, a small, private liberal arts school which has its own racing team, as well as a good number of students who get around by bike. (Even on my recent ride in the snow, the bike racks on campus were full.)

I would recommend touring Walla Walla by bike to anyone. Bikes are ideal for visiting the area’s premier wineries or just for the exploration of its relaxing, pastoral scenery and rich cultural history. Both shops rent bikes for this purpose, and the city also puts out two excellent bike maps.

Hope you enjoyed this little trip to Walla Walla. Did you explore a new scene over the holidays? If so, we’d love to hear about it!

My wife and I are always looking for weekend getaway destinations. It doesn’t seem like we could go wrong with the wine and cycling there!

The area around Walla Walla is so beautiful, and they have a lot of really good wineries out there.

For wine tasting by bicycle, Walla Walla is much safer than Napa. The roads have wide shoulders and because WW is not near a major city, there is no mad rush of commuters to content with.

The Shop owners, Steve Rapp and Greg Knowles are great guys and have built strong community support through their sponsorships – and friendship.

If you go to WW and like coffee, Walla Walla Roasters is a must.

Thanks for the WA coverage!

It helps for those summer trip planning.

@wake: wider shoulder than silervado trail or highway 29 north of napa? all the good wine tasting in napa valley is north of napa proper, where you’ll find massive shoulders and fantastic views. that said i’ve never been to walla walla, though i’d love to.

Bicycle Barn is AWESOME – When I was on two-person bike-camping tour through the area on the way to Northern Idaho, we had hit a patch of goat-head thorns that punctured maybe up to 10-30? holes in our tubes. My bike didn’t make it the next day, so we got a carlift into Walla Walla to the Bicyle Barn. Reggie, pictured, totally took care of us and didn’t even charge us for full labor – he felt it was his duty to help the traveling bicyclists as much as he could. I’ll never forget the hospitality of the Bicycle Barn – one thing Walla Walla does need however is some official camping.

As someone who did my time in Walla Walla (in college – not the pen), I can attest that it has some absolutely great road riding. My favorite road rides are out into the wheatfields up Waitsburg Road or out to Mill Creek.

Ann Weatherhill really was amazing and I was in Walla Walla when that tragic accident happened. It was so sad and really a blow to the entire WW community, as her and her husband were very active. I am glad to hear that some legislation has come out of that tragedy.

Also, Reggie pictured above is a great, helpful mechanic, awesome freestle MTB rider, and all around nice guy.

Another great thing about Walla Walla is its awesome BMX track, which is one of the few ABA sanctioned tracks in eastern WA.

It’s great to see a vacation writeup of Walla Walla…ahh, it makes me miss the Blue Mountains and rolling wheatfields.

Besides its just fun to say, Walla Walla. Say it with me.

Thanks so much for highlighting our team in your recent blog post. Walla Walla is a great place to relax, ride and drink some excellent wine. If you are interested in coming out, be sure to get in touch with our team and we’ll show you around!

Walla Walla is a great home base for lots of outdoor recreational stuff – Whitman’s outdoor program is extremely popular and they do tons of fun outdoor trips. It’s a very physically active campus in general. And there are cool mt. bike trails by Bennington Lake too – I didn’t know how good I had it. Sigh.

I grew up in the Walla Walla area and enjoyed biking around town and surrounding areas a lot. It is a great area to bike around. As I get older (as many people tend to do)I find I don’t have the endurance that I had when younger. A really cool and green product I found to help me go farther and enjoy more is an Electric Mountain Bike! Check some Electric Bikes out at: http://www.agreenebike.com –I know perish the thought of contaminating such a pure sport.