Cartoon of the Week: Which way, BTA? 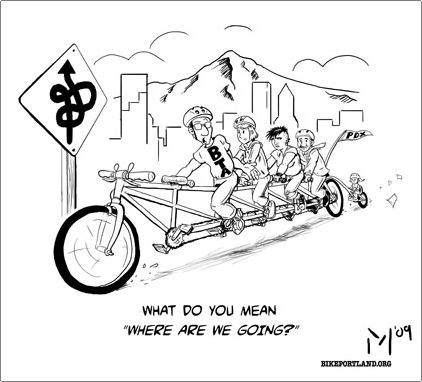 [Note from the Publisher: I hope you like our first-ever political cartoon. We’re very excited to add this into the mix. I’ve always tried to model many aspects of BikePortland after respected, and more traditional news outlets like magazines and newspapers and this is a step in that direction. We are very lucky to have illustrator Mark Markovich working with us. I know that illustrations are everyday things in the news world, but for us, it’s a big deal! We’ll feature them in different ways — some on their own, others to accompany stories. Our goal is to give you another perspective on timely and relevant issues and we hope they spur constructive dialogue. Stay tuned for more and thanks for visiting. — Jonathan Maus]

– Related story: BTA at a turning point with or without Bricker

For the latest news on the Bicycle Transportation Alliance, check out all the stories at our “BTA” tag.

Applause! All the “major kinds” of bike-riders represented. Love the little kid at the very back.

Hope they get that front saddle occupied soon.

The sign looks like the maneuver a bike has to make to get over the Columbia river today.

Neat idea, Jonathan. Raises the journalism class of BP, fer sure. I vote for a regular feature!

Good work, Mark, in a dwindling art form that is so much more expressive than run-of-the-mill ‘shopped imagery.

Absolutely devastating to the BTA to run this right before the holidays – when most of their staff is planning their vacation and the annual membership cards have been mailed out waiting to be returned with a nice fat donation check.

Unless the BTA responds quickly in a way that meaningfully reconnects them with their concerned membership base, they might have some trouble weathering this run of negative publicity. It’ll be interesting to see if they go on a PR offensive starting Monday in response.

Great to see BikePortland evolving into a thriving, lively news and op-ed outlet for all things bike related. This is a great addition to the offerings. And a timely politica cartoon to boot. Way to keep giving the site some teeth.

Until the BTA becomes a PAC, they remain toothless. They can’t endorse candidates, if they spend money on working in Salem they risk getting the IRS down on them. They are too cozy with city staff and all the related purse strings to ask any tough questions.

The NEW BTA needs to be a PAC. There is nothing more dangerous than a PAC that has nothing to loose, nothing that can help bikes more.

Provocative, to say the least. Can we all just go out for a nice bike ride?

I’m not sure about the BTA being a PAC but one model they might look towards is something like the Oregon Bus Project which has a 501c3, 501c4 and a PAC. The BTA does get some benefits from being a C3, but it could add an advocacy arm with the appropriate legal firewalls.

Alternatively, there might be space in Oregon’s political landscape for a political advocacy focused bike group that isn’t the BTA.

Love the addition of cartoons!

Guest
This is getting old.

“Our goal is to give you another perspective on timely and relevant issues and we hope they spur constructive dialogue.”

You strayed from a constructive dialog about the BTA about five posts ago. Is your goal to inform and inspire, or to divide and harass? Time to think about your own direction, because stuff like this us just ugly and Portland deserves better.

This is hardly ugly. The more ways the cycling world tries to be creative and innovative to get the dialogue going the better. Now, if every cartoon going forth was about the BTA, that wouldn’t be cool, but certainly one cartoon like this shouldn’t hurt or harass.

At Streetfilms we have tried just about everything once: using animation, dressing up as a Sasquatch, showing Donald Shoup playing with model cars, getting people to yell “Bike Box!”, showing how snowfalls create naturally occurring neckdowns – you gotta be willing to try things.

if BTA wants to engage in a dialogue, they have to speak up. there has been considerable turnover at BTA in recent months, with no coherent explanation what is going on. simultaneously with firing the executive director, and with no one yet to replace him, they have dropped a perfectly good mission statement, “opening minds and roads to bicycling,” with some jargon-laden gobbledygook that says nothing at all. and this on the incredible premise that they have “achieved” the existing mission statement, so it is time to move on (which is also kinda, sorta their explanation for kicking Scott Bricker to the curb, no explanation at all offered for Karl Rohde).

it is certainly not true that there is no further work to do in “opening minds and roads,” and there is almost no way of knowing what future course is implied by “reinventing transportation,” etc.

Some criticism of any organization is realistic and expected, but almost all of the “journalistic” articles that are found on this website about the BTA have been extraordinarily critical. It almost appears to me as if Mr. Maus is just creating a scandal to increase the numbers of people that are looking at his website, and as if he has a personal ax to grind. For a website that wants more people biking, why does Bikeportland keep on taking shots at the BTA, which has the same goal?

To “This is getting old”,
Yes it does seem sometimes like this forum’s goal is to divide and conquer in lieu of inform and inspire. But surely BTA has a thicker skin than that? I think the cartoon is pretty harmless. And if BTA is worth anything, they’ll pull themselves back up and help make this a better place for ALL of us.

thanks for all the comments.

Joel wrote that we’ve been “extraordinarily critical” of the BTA. Can you please elaborate with specifics? I feel like we’ve reported fairly on their actions.. If it happens that those actions are not all roses and unicorns than that’s out of our control.

I wouldn’t call it an “ax to grind”, but I have been disappointed by the direction, leadership, and inaction of the BTA for quite some time now. Those are feelings I have made public in the past both to local media and to BTA staff people and board members directly.

I don’t feel like we’re “taking shots at the BTA”… and yes, we do have the same ultimate goals, but we have very different ways of achieving them.

I feel like our reporting on them stands on its own. If you disagree, I would love to see specific examples from our stories that make you feel that way.

And “this is getting old” wrote that we’ve “strayed from constructive dialogue”. Again, I would love to know more about what you’ve read on bikeportland that makes you feel that way.

And Afro Biker wrote that “this forum’s goal is to divide and conquer”. I can tell you that is far from what this site is about. Yes, we want to conquer, but we are from being about dividing to do it.

We want to “conquer” by any means necessary. divide, unite, radical, conservative — whatever it takes to get more people on bikes.

I understand that the BTA is a sacred cow in this community and that’s why I’ve always been extremely sensitive and careful about reporting on them. It is my opinion that — while it might sting a bit at first to hear about such a beloved organization going through some very difficult times — the community is ultimately much better served by knowing more about what they’re going through.

I can’t wait to do a bunch of stories about some exciting, important, creative, and bold initiatives the BTA is undertaking…. and when they launch them you’ll certainly about it here first.

Joe Rowe (#8) – The BTA doesn’t have to become a PAC. They could set one up and make grants to it. It’s a bit tricky, but other 501(c)(3) organizations have done it successfully.

General comment – we need more organizations than just the BTA. I have hope that the BTA can be more motivating, especially after talking to several of the BTA’s board members. Time will tell. What we really need are people who will step up and work, whether for the BTA, or forming other groups that will handle the activities that the BTA can’t or won’t handle.

“If it happens that those actions are not all roses and unicorns than that’s out of our control.”

I prefer puppies and bunnies.