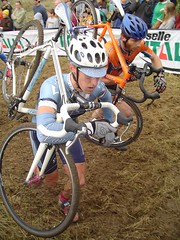 The final race in the 2009 Cross Crusade will happen Sunday at Barton Park in Estacada. For two competitors, Molly Cameron and Sean Babcock, the race will determine who walks away with the coveted title of overall series champion.

Cameron (Portland Bicycle Studio) and Babcock (Team S & M) are separated in the standings of the Men’s A category by just one point. Cameron, who currently sits atop the standings, has won two Crusade races already and has finished top five in two others. Babcock won the second race in the series and is coming off a fourth place finish ahead of Cameron last week.

Cameron says, “I can’t believe it has come down to a last race battle. I have a one point lead in the overall. It is my race to lose.”

Cameron hopes the race is decided not by strength alone, saying that it’s not a stretch to call Babock “One of the strongest elite riders in Oregon right now.” But she adds, “Cyclocross is not always about being the strongest.”

The course at Barton will be a fitting venue. It’s tough, rocky, and technical and Cameron says “if you’re going to get a puncture anywhere, it will be at Barton.” Babcock seems to like racing the Barton course. He took his first ever Crusade win there back in 2008.

This is gonna be a great race to watch. Lots of good vantage points and if it finishes with that run-up… stoked!

Best to both of you! and the rest of the crusaders, of course.

I’m confused – Molly is a woman racing in the Men’s A division? Is that right? And if she’s a woman who goes head-to-head with one of the strongest male riders in Oregon, doesn’t that mean that she’s a national or world-class woman’s competitor?

Good luck Molly!!! Team Beer will be cheering you on!!

I’ll be at Barton with my camera and looking forward to this race. Go Molly!

@ Dan, #2: Yes, it’s certainly confusing, but it shouldn’t hurt to ask and I don’t know why folks might hesitate to answer.

Molly’s a dude who asks to be identified by the female pronoun “she”. That’s to the best of my knowledge. As bike industry people go, Molly’s pretty cool and professional, in my experience.

End of short story (as far as I know).

When I grow up I want to ride like Molly.
One
Tenacious
Racer.

I wanted to put a shout out to all the women who are seriously thinking of racing singlespeed cyclocross:

I am in the process of compiling a list of women who want to see a womens’ singlespeed class added to next year’s Cross Crusade. We’d race at the same time with all the other women but our results would be tallied separately.

I’m doing this to give women who want to race singlespeed a another way to do so without having to pit themselves against a field of three hundred men.

If I can get at least twenty women on board then the Cross Crusade organizers are willing to talk with me about this. Contact me through my blog (just respond to my last post with “Womens’ SS” and your contact info and I’ll be in touch.)

I have sixteen names on the list. Just four more will start the discussion!

If you want to talk with me more about this I will be at Barton Park racing with the Beginner Women at 2pm. (I’ll be in my team kit, blue, lavendar, pink and black with the “ponytailed-chick-on-a-cruiser” graphic.)

Singlespeed ‘cross ROCKS and I would love to encourage more women to come out and give it a try.

The beauty of the SS class is it’s all comers.

Let’s hope neither Molly nor Sean flat this weekend so it’s a tight race. I’ll be rooting for you both!

Molly is an amazing, inspiring, supportive, athletic, all around badass feminist, and yes, she goes by she.

If you would like more information about transgender identities I suggest our good friend Google, as well as local organizations such as the Q Center and SMYRC.

Here is a snippet from WIKI:
Transgender is the state of one’s “gender identity” (self-identification as woman, man, or neither) not matching one’s “assigned sex” (identification by others as male or female based on physical/genetic sex).

Molly is amazing, please cheer for her on Sunday!

Yep, let’s hope for no flats, equal falls, and may the best rider win on legs and guts. Ok, and maybe a teensy bit of luck. But NOT because of a mech!

boneshaker #10 – but the trick is its also a pretty imposing class, especially for inexperienced women – were largely a boys club of experienced riders – a welcoming lot, to be sure – but we can be a bit daunting, it seems. beths come out of this season totally gung-ho for singlespeed cross, and rightly convinced that more women would jump on board a single as their intro to cross were they racing against their own in both senses rather than merely one or the other.

whereas i am 100% against splitting the singlespeed class by age or ability, i actually think providing a women-only option is worthwhile – while splitting on lines of age or skill would dilute what makes the singlespeed category great, offering an optional womens category could serve as a more effective singlespeed conversion tool than a corn maze.

as for the cameron/babcock showdown, ive got nothing against sean in the slightest, but by virtue of having known molly for years and years and years im gonna have to line up on her side of the fence! itll be one hell of a finale, thats for sure… especially since this race might *not* determine the crusade series win, given that that title is based on best 6 out of 8 races…

EIGHTEEN! Thanks ladies, and keep those cards and letters comin’!

(Thanks also to the two guys who responded that they would NOT support a separate womens’ singlespeed class, without explaining WHY. All the more reason to promote a womens SS class if there are enough women to fill it.)

I’ll be cheering for Molly — if I’m still upright and breathing after my race. I hear Barton’s super-technical and I’m looking forward to it.

I just hope they both make it through without any race-deciding mechanicals. Should be good.

That was the most heartbreaking finish I have ever seen. The last thing I saw was Molly & Sean, neck and neck on the last run up. I ran around to get a view of the finish line and heard a huge crowd groan..then five or six other riders came through before Molly! Didn’t see the fall, but I know it must be haunting her.

P.S. Didn’t take photos of the men’s race (enough people do that already) but my women’s and kiddie race photos are here