On Thursday night, the man behind Copenhagenize.com, Mikael Colville-Andersen, will share the stage with Portland Mayor Sam Adams, a representative from the U.S. Embassy to Denmark, and author and Oregonian political reporter Jeff Mapes for a discussion about how to market bicycles to the masses. 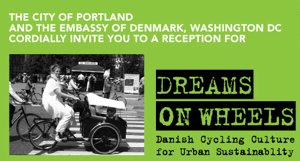 Here’s a snip from the event description:

“Colville-Andersen’s talk will explore Copenhagen’s journey toward establishing the bicycle as a feasible, acceptable form of transport, as well as touch on the importance of marketing bicycle culture to the average citizen.

He explains how the 500,000 people on bicycles each day in Copenhagen are not “cyclists,” nor are they
“environmentalists;” they merely choose to ride because of an existing safe, quick infrastructure. 30 years of traffic and urban planning have transitioned the bicycle from an instrument of sporting equipment to a democratic tool that has liberated the people of Copenhagen from cars, and created the foundation for one of the world’s most liveable cities.”

For his part, Mayor Adams will share Portland’s story, framed in the new Bicycle Master Plan, which aims to create Copenhagen right here in Stumptown.

The event will be moderated by Jeff Mapes, the author of Pedaling Revolution: How Cyclists are Changing American Cities (Oregon State University Press, 2008). Mapes traveled the world (including Copenhagen) to research his book and that perspective will allow him to tie everything together.

Portland, whose love affair with Copenhagen is well-documented, has been getting a lot of advice from Copenhagen lately, and this evening should reveal even more insights into whether or not we’re truly on the path to “world-class” or if we’ll just remain the best of the worst.

Bicycle Culture from Copenhagen to Portland
Oregon Manifest Bike Union (539 NW 10th at Hoyt)
Thursday, October 29th, 7:00pm
Tickets are $10* and are available online or at the door
*Complimentary Hopworks ale and and an hors d’oeuvre

Thanks for the nice mention of the event, Jonathan. But just to set the record straight, I’ve never been to Copenhagen. I am hoping to get there this summer.

I still recall images of my trip in July to Copenhagen all the time. Families with Bakfiets/box bikes, an elderly couple…the woman on the rear rack sitting sideways with the gentleman pedaling along.

Despite the hills, with proper infrastructure I can see an American city like Portland reaching this level of confidence on the bicycle.

I think it is crucial that all parts of the Portland area are receive top notch facilities as well, not just the ultra close-in Sunset Magazine areas.

No location…be it socio economic, age, race, or any combination of…should be underrepresented in this type of livability.

I want to strongly agree with Kenny that making cycling and public transportation infrastructure available in outlying areas is vital to having a just and livable city. One of the effects of the resurgence of cities is that livable close-in bicycle and public transit infrastructure is getting prioritized at the very moment that poor and working class families are being pushed out to suburban areas like Rockwood and Hillsdale that often lack not only parks and sidewalks, but also safe bicycle infrastructure. Those with the least cash are in the best position to feel the advantages of bicycling: They will feel most immediately the cost-savings of not owning a car. They will also benefit even more than middle and upper-class riders from the exercise of riding. They have the least access to exercise and healthy food, so tend to be more overweight (in the US food insecurity–not knowing where your next meal is coming from–is ironically strongly correlated to being overweight/obese, in part because those calories that the poorest have best access to are the emptiest).

For these reasons, supporting bicycle infrastructure for the poorest areas of time is not only ethically vital, it is good business sense for the community.