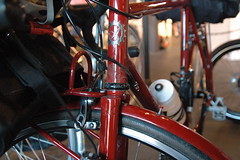 The Circle A Cycles bike was the only one
with dirt proudly on display last night.
They’ll all be looking battleweary by now.
(Photo © Elly Blue)

Our correspondent Mark Reber just called from up on Skyline Drive where he’s been photographing the challengers in the Oregon Manifest Constructor’s Race at the race’s Beer Pickup Checkpoint.

All the racers Reber saw were in high spirits, he said. They report a beautiful and rural but challenging course that began at 10am today at Vernonia High School and continued to Scappoose before winding through the west hills and returning to Portland via Old Germantown Road. 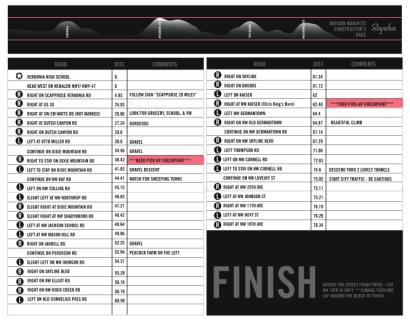 Gravel roads and steep climbs took some of the challengers by surprise, and Reber says that the more experienced and fit racers are clearly coming out ahead.

Conditions required last minute adjustments to the set up of some bikes. The front rack (with innovative canvas six-pack holder) needed to be removed from the Hufnagel bike after it came loose partway through the race — fortunately the beer fit into a rear pannier.

Reber heard of two crashes — unfortunately we don’t yet know what happened or if the riders are back in the race, but fingers are crossed that they are okay — involving the Rex and Boxer bikes. 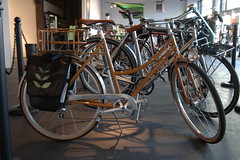 Several bikes did not start the race, or have dropped out somewhere along the way, including the bike made by veteran framebuilder Mark DiNucci, which did not start. The Framebones mountain bike that had been considered a favorite by some to do well on the course’s rough terrain is also out of the race.

Natalie Ramsland, former bike messenger and Sweetpea Bicycles framebuilder did not enter a frame of her own into the challenge but is racing the Ahearne Cycles petite, step-through frame — and was reported to be in sixth place with another hour and a half to go.

Racers are expected to start rolling into the finish line at NW 10th and Hoyt around 4:00pm. Racers will arrive at the parking lot across the street from the Oregon Manifest Bike Union, change into classy streetwear, and ride around the block to the finish line.

We’re on the edge of our seats here and will bring you more details and photos as soon as we have them.

or those, (Bob, Honus, etc.) who like touring/commuter bikes. The Oregon Manifest Bicycle Show. A show for hand built bikes that they also had to race 80 miles today and then have their bikes judged. A pretty cool event with some really nice hand built bikes.

They also had to carry items they were given along the way, notice what this guy
had to bring along.

isn’t it about time for an update?

Update is incoming — ’til the pictures upload and the story is pieced together, here’s the rundown on winners.

For the race (by total race time — the departures were staggered):

3. Dan Boxer racing for (and builder of) Boxer Cycles in Seattle — 5 hours 21 minutes (he was first across the finish, making a splash with bloody knuckles and handlebars)

All the rest, photos, and more before I go to sleep tonight.