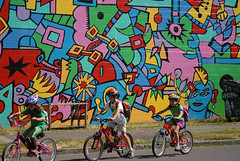 The camp is for kids 6-8 years old and the idea is to teach them how to ride on city streets, do basic bike maintenance (very basic), build confidence, show them around the neighborhood, and of course to just have fun.

My daughter is finally old enough to join so I went along with her on the final day of the week-long camp. After gathering at the CCC on Alberta and 17th, we rolled east via N. Going Ave. The street is slated to be a major bike boulevard and it’s easy to see why. It’s plenty wide, already has low traffic, and its just one block south of Alberta. Even biking with 13 kids, several of whom were fresh from the sidewalk and the watchful eyes of parents, was stress-free.

Kim Whitney, the CCC’s youth programs coordinator, joined us for the ride. She and camp counselor Chris Cook handled the kids with a healthy balance of respect and playfulness. In response, the kids were (surprisingly to me) very easy-going the entire day. When I mentioned how well-behaved they all were to CCC executive director Susan Remmers (who also happened to join us for the ride), she said great staffers are key, but that much of the reason was that these kids have good family support (which unfortunately isn’t always the case with their public school based “Bike Clubs”). 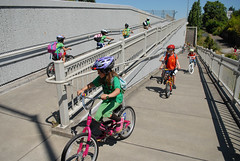 The bridge was a big hit.

With Portland’s selection of parks, there’s no shortage of destinations for a gang of kids on bikes. Our first stop was Unthank Park in North Portland. Under the shade (it was 90+ most of the day), the kids had a snack and played tag.

From there it was off to scale the heights of the Failing Street Pedestrian Bridge. The kids pedaled hard up the ramp and then tried not to look down at the zooming cars on I-5 below, before bombing back down (carefully of course) to the street level.

Our destination for the day was Overlook Park, the gem of park near Kaiser Permanente on Interstate. After lunch, the campers converged with another CCC camp for a game of Bear, Mosquitos, Salmon (sort of like Rock, Paper, Scissors, but full-body and there’s running involved).

Far (in kids terms) from the CCC headquarters on 17th and Alberta, it was good that we had a stop at Mio Gelato in Irvington on the itinerary. The promise of cold, sweet, Italian ice cream kept the kids pedaling back across town.

We bombarded Mio Gelato. Three groups of CCC bike campers simultaneously sought refuge in the coolness of the gelato, and it all disappeared before I could even get my camera out.

After gelato, one challenge remained — a final ascent up the steep NE 17th (near Sabin Elementary School). As they had done all day, the kids pedaled hard, without a complaint to be heard. They conquered the climb, the neighborhood, and their week of Bike Camp.

See more of the action and fun in the slideshow below:

I wish that the CCC would have had more camps this year – I would have loved for my son to learn more about bikes and support a great community resource at the same time!

Thanks for the report! My daughter, Greta, is due to attend later this summer. Sad to say, we’re looking forward to it more than she is, though I expect that’ll change after the first day.

I promote the bike camp to many friends and neighbors. They report back that they love it.

Our city should be funding this on a much larger scale, and doing it out in Gresham and East of Interstate 205.

Also, Eleni takes after her old man in more ways than one: she has your eyes! 🙂

Jonathan, Thank you for writing about our Bike Camp. We’re proud to help fill the bike lanes with safe and confident mini-cyclists.

mabfs, There are still a few spots left in Bike Camp this summer. Also, if we have a last-minute cancellation, we post it to our Twitter acct: CommCyclingCtr.

Simple correction, but NE Going is *two* blocks south of Alberta. And, isn’t the CCC awesome? I live next to/above them and my son and I love the work they are doing.

I love that photo of the kids ascending the Failing Street Ped Bridge!

Great to hear you guys stopped in! There are some great Photos in the slideshow!