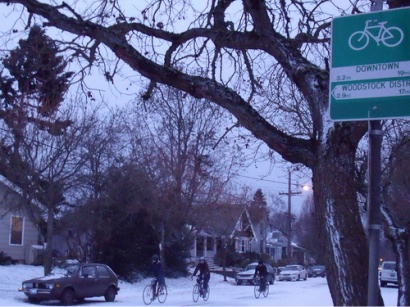 In Portland, fresh fallen snow is no impediment to biking.
(Photo © Greg Raisman from the BikePortland Flickr group)

– It’s a snow day! Though after riding to work just now, it seems like ice is the order of the day. Be careful out there, and be sure to brush up on these riding techniques and tips for staying warm.

– Exciting presidential news of the day: Obama and Biden (a regular train commuter) will travel by rail to the inauguration.

– A new Vancouver, BC city councillor, Andrea Reimer, has proposed turning the city’s annual carfree street festivals into weekly occurrences. Merchants in Vancouver’s Punjabi district have embraced the proposal, predicting that it will be a boon to business in the down economy.

– Worldchanging has an interesting, long essay up about the “reconquest of the city.” It’s mainly a profile of Danish architect and urban designer Jan Gehl, also focusing on the rise of permanently carfree streets, from 1960s Copenhagen’s then-controversial Stroget to contemporary Montreal’s experiments with a carfree St Catherine Street.

– Has Portland become Ecotopia? The New York Times thinks we might just be fulfilling the dreams of the 70s underground classic novel. Which means it’s time to dream even bigger…

– If you are craving all news roundup all the time, check out Streetsblog.net, a new and extraordinarily useful one-stop shop for livable streets and sustainable transportation news and views, brought to you by the intrepid folks behind Streetsblog and Streetfilms.

riding is out unfortunately….700×23 tires with higher PSI….I wouldn’t have a chance…

I saw 3 riders on the drive in…fat tires, low PSI…they seemed to be doing OK but riding on the sidewalks when possible as the roads aren’t looking too friendly…

I sadly had to leave the bike at home today. A bit to much ice on the roads for me. Not to mention a fear of cars sliding into me on icy roads.

I did the commute in Corvallis this morning. Not too bad. There is nasty ice under of all this as evidenced by the bare patches. We had a couple of inches in open areas and it drifted to sidewalk deep at the curbs.

In the snow riding techniques I’ve seen, I haven’t seen anybody suggest lowering their seat. I did it this morning and while it cuts down my power stroke while pedaling it feels safer being able to get toes on the ground on both sides.

A quick sampling of some of the racks at my work suggests a dozen or two have cycled in.

Rode in on the X this morning, it wasn’t too bad if you stayed off the packed-down icy stuff.

Yesterday was one of the best cycling days I have ever experienced in Portland! The streets were basically empty, the Macaframa alleycat race was fun and zoobombing in the snow (snowbomb) is a rare treat that I never pass up. Plus, I think the Max trains were running on a 24 hour schedule yesterday, in order to keep the tracks from freezing over. Just add snow to the list things that I love about PDX!

There’s a pile of serious cold-weather gear on the table – including the bike tire chains – but I’m not going anywhere until the furnace repair folks show up to defrost this place. Besides, none of that snow has stuck west of I-5 south of Hazel Dell. Want more snow!

I saw a few bikes out, same as bahueh mostly MTBs, but I decided I was better off walking. even then I almost fell and dropped my coffee a couple of times.

Last night I put knobby tires on what is normally a slick tire bike, and was managing to ride for miles on roads where everything was shiny, and people were having trouble even walking. My only actual trouble was slipping off a pedal when I started riding again after a red light. I probably was lucky though I tested the traction of the bike while standing next to it, and found it wasn’t hard to make it slip. I’m looking at either making my own studded tires via http://www.icebike.org/Equipment/tires.htm or getting some high quality ones with the help of a detailed guide like http://www.peterwhitecycles.com/studdedtires.asp

I would probably only use them a few weeks a year, but hopefully I can store them the rest of the year, and get the overall cost to less than a cup of coffee per use as they aren’t cheap.

I bike and bussed in this morning. Zip ties on the rear wheel. Pedaled slow on the powder and the chain marks. Stay off the residential streets ice! Kept the toes out of the clips and put the feet down and slid down to Clinton. Downtown was great though!

Eugene was a little scary downtown with lots of ice on the road. Other than walking a block or two of the worst bits, the commute was uneventful.

For walking something as simple as a sock over each shoe works, or you could go with a fancier solution such as yaktrax.

Jonathan just put up an open thread for discussing our snowy, icy commutes:

yesterday was classic for sure! i could not get e-nuff riding in.

Wow! What a news roundup. . .
Regarding Obama & Biden’s pre inaugural train ride: Biden was making comments to congress recently about how during the Olympics in Beijing there was High Speed Rail Maglevs in the background and asking why America has not been willing to create such infrastructure!

Speaking of High Speed Rail, Ecotopia is being republished!!! In this Classic Cascadian text, a Boeing jet fuselage is converted to a maglev from San Fran to Vancouver, with beanbag chairs for seats! Ecotopia and the sequel/prequel? Ecotopia Emerging are not the greatest storyline, but brim with ideas for a more sustainable lifestyle. These books set off a bit of a movement locally, with groups on the coast and throughout the Willamette Valley discussing the practical and radical ideas that Ecotopia presented. Bioregionalism can be used culturally to allow experimentation with livable transportation. Especially, if the rest of the nation is not comfortable with the improvements of the Pacific NW.

Car free Commercial Drive in Van City?! Ciclovia comes to North America?! Vancouver, BC is going to be providing Portland with some competition now with the new mayor, Gregor Robertson, and Vision Vancouver city councilors. The campaign was between two progressive cadidates. Robertson is the founder of Happy Planet juice and campaigned to focus on the HUGE Vancouver homeless problem (only place in Canada where you won’t lose fingers to frostbite if you are on the streets.) who ran against Peter Ladner, who is an avid bike commuter!

Last monday, the Seattle City Council just approved a massive expansion/reinvigoration of the Seattle Streetcar, with 4 new lines to be designed by the folks who did the Portland Streetcar. the 4 lines would go from Ballard to downtown, University District to downtown, Seattle center to international district, and international district, first hill, capitol hill.
Seattle also is about to maybe tear down their waterfront freeway, the Viaduct and build a waterfront plaza and boulevard! They are waiting to hear from the WA governor by end of Dec.
Is Seattle learning to finally like transit?

At Citybikes Annex this morning, we just found a box of old (get this!) bicycle tire chains in some dark recessed corner of the shop. They’re designed to fit 26″ ATB wheels with fat tires. We have no idea who made them but I’m pretty sure they’re been sitting around a VERY long time. We’re here today until at least 4pm. Stop by if you’re curious.