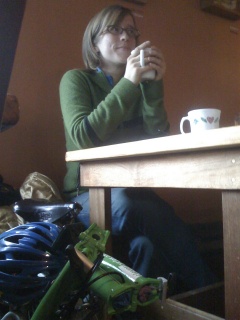 Taking the Brompton to brunch at the Tin Shed.
(Photo: Amy Subach)

When I posted on Thursday that I’m headed out today for an east coast train and bike tour, Todd at Clever Cycles got in touch over Twitter right away with the offer of a bike loan.

That’s how I came to spend the weekend riding around town in sun, rain, snow, and ice on a bright green, lovingly built-up Brompton folding bike and with a big smile on my face.

I’ll be writing more about the Brompton as I travel (including photos) but after riding around all weekend, I have two things to say:

First, this bike is ridiculously fun to ride. And to fold, and to unfold, and to wheel around by the seat on the skateboard wheels Clever installed in lieu of giving me a big heavy rolling suitcase for it. It even holds up well in the snow and ice due to its smart design and low center of gravity. It has a built-in bell, and has an option for magnetic lights. And you don’t need to carry a lock — you just carry the bike instead.

Second observation: this bike is distinctive, and it’s a looker. Riding down the street, or walking into a store or restaurant or friend’s house and folding it up makes you an instant celebrity. The star treatment was a bit disconcerting as I went about my daily life this weekend, but should be just the ticket when visiting cities I don’t know well. (By the way, here’s a real celebrity, Will Self, on his love affair with the Brompton.)

And for the same reason, it’s an instant traffic calming device. This must be what it is like to ride around with kids on board. I get wide clearances as people slow their cars way down to gawk.

I’m enjoying this while I can, before the rest of Portland catches on to the dream of a lock-free life.

And Elly…you can travel with it and without a box or bike bag…just fold it and send it through the airport xray machine as a carry on! (It is nice to ride through those long airports with your bike and bag.)