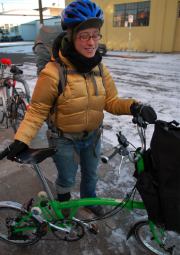 All loaded up just before
she left for the train station.
(Photo © J. Maus)

The first leg of my journey begins this afternoon, barring any delays on Amtrak (that’s been known to happen before).

I’ll be on the Empire Builder to Chicago for two nights, and then spend a third night on a less cushy train to DC. It will be nice to have a break from email, phone calls, the internet, and just about everything for a few days — though it would be nicer if it weren’t quite that long.

And who knows, maybe a few years from now it won’t be. There is plenty of speculation about an Obama administration’s support for a national high speed rail network, perhaps as part of the forthcoming economic stimulus package.

The first time I rode the train across the country I was 19. My mom had given me James Howard Kunstler‘s The Geography of Nowhere, and I spent much of the ride sitting in the viewing car, alternately reading the book and looking out the window at examples of the shifting rural and suburban geography Kunstler describes in the book. The experience definitely changed the way I see the world.

This time around, one of my projects for the train is to write a letter to the Obama transition team about my perspective on livable streets and transportation issues. I’m hoping the passing view into back yards, industrial areas, run down city outskirts, and small farms is just as inspiring now as it was a decade ago.

Elly- I don’t know if NYC is on your itinerary, but if it is, you should take a ride down Broadway. The city recently revamped the area around the Empire State Building, with an excellent series of bike lanes, ped-friendly “islands,” etc.

I used to live in New York, and at the time it was a nightmare for cyclists. But things have changed in the past 20 years, and New York, believe it or not, is quickly becoming a reasonably bike-friendly place.

The good part of the Empire Builder route is passed in the middle of the night, if it is running on time. But if it gets delayed, and you get up at dawn, you can see Glacier National Park…

Your pals on Lovejoy wish you happy travels!

I wouldn’t really characterize NYC as a “bike-friendly” place (and I’m not speaking of critical mass rides, but commuting/recreational riding) just because cycling infrastructure has improved. There is the illusion that because of these improvements that the streets beckon cyclists with the prospect of safe and welcoming passage, but the actual larger culture on the streets of motorists, pedestrians, cyclists and cops is more antagonistic towards cyclists. Obviously cyclists are at fault too. I could be describing Portland I suppose, but it’s more intense and exagerrated here. It’s like everyone is asserting their personal/private freedom in a public space that offers only limited access and freedom. Be sure to ride down the 9th Avenue cycle track between 34th and 14th as much as you can and see with amazement how it is used. I would love to read an accounting of the non-cycling activities that happen in a month. It’s really a little mystery corridor where all kinds of mischief and wackiness unfold. Riding in NYC can though be amazing and fun once you get the hang of it.

That sure is a shiny gold coat 😉

9th and Broadway, definitely going to check it out.

The Empire Builder treated me pretty well — we ended up going through Glacier in the daylight, and I got an extra 9 hours of reading and hanging out with new friends, free of charge.

This is really awesome you are doing this…it makes so much sense to step out of our “portland bubble”.I know I’m guilty of having a little too much portland pride and am excited to hear what you experience