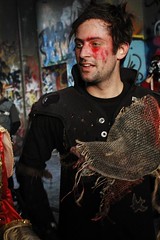 Held each year since 2002 by Chicago’s infamous Rat Patrol bike club, St. Ratrick’s Day is celebratory event that features a freak bike parade and other shenanigans.

To win this year’s coveted crown, Tiller outlasted his opponent in what was reportedly an “epic joust” held at midnight amid sub-freezing temperatures in Logan Square. On his way to victory in the finals, Tiller endured a second round match that took six jousts to declare a winner. In the final contest, Tiller said it was a close call, with both men hitting the pavement at nearly the same time.

In a message posted in the Zoobomb Forums, Tiller wrote of his tall-bike victory:

“In an epic battle of lances and whiskey buzzes I managed to win the Ratrick’s tallbike joust as well as the hearts of all the fine princesses of this nasty cold, wet, flat chicago land. I got a really sweet buckle too.”

In tall-bike jousting, competitors ride toward each other with long lances in an attempt to knock down their rivals. The spills can be brutal, as the saddle on tall bikes is usually about ten six feet high. The first one to hit the ground loses.

Portland has several tall-bike jousting competitions each year with the most coveted contest taking place in June at the Multnomah County Bike Fair.

Riders heads may be at 10 feet up on an especially tall tallbike, but most tallbike saddles are about 6 feet up. The regulation for a recent jousting contest was above shoulder-height on the rider.

thanks for the clarification Dag. all I know is that when you\’re up there it seems like a long way down (especially on a triple-stacker!).

Thanks for running this story. It\’s a nice touch of our bike punkers among recent political/city bikey hubbub. Not that I don\’t like that either!

There is a 10-foot tallbike in existence, the \”Skybike\” plans that are in the Atomic Zombie book.

They go way over 10\’, but the old Alberta Street triple resurrected and redecorated last summer by Captain Ace Hole was certainly among the taller bikes to\’ve plied Portland\’s streets of late:
http://flickr.com/photos/bikeportland/592683049/sizes/o/

Regardless, for those who care, Cascadia\’s commonly accepted regulations are still CHUNK666\’s \”Organ Donor Standard of Excellence\”:
\”Tallbikes must conform to the Organ Donor Standard of Excellence. The wheelbase must be that of a standard adult bicycle. The seat height must be roughly the shoulder height of the contestant. The horizontal distance between the rear hub and the seat must not be greater than a few inches. In other words, the bike must approximate the proportions of a standard double-stack tallbike (one bike on top of the other). Note that the actual method used to construct the tallbike is irrelevant, so long as these proportions are met; for example, the Organ Donor itself is not made in this way. These rules are intended to prevent people from trying to joust on their big brother\’s ten speed, and exclude bikes which give an unfair advantage due to their long wheelbase and stability. The Registrar will have the final say in interpreting these and any other rules.\”

In other words, Gabe kicked ass even though he was jousting against what in Portland would be considered a cheaterbike! We are truly proud.

(I just realized that the article didn\’t mention that Gabe\’s opponent was riding a bike with a stretched wheelbase. That\’s why I brought up regs.)

This is my first post here, thank you Mr. Maus for all that you do. I cannot begin to comprehend how you find all the time to maintain the site, in addition to your family \”duties\” 🙂

I just spent the last 1-1/2 hours rummaging through the Rat Patrol\’s website, linked in the article:

If you haven\’t taken a look, it\’s a very deep, well developed site with many, many interesting diversions.

Dude, that\’s an awesome website! I really love the Miss Rockaway Armada – thank you for showing us the link!

From what I\’m told the victory was well-earned. Our competitions have always been open to all bike clubs and so this was unprecedented but fair and square. Note also that Rachel our former champion cleaned up at Slaughterama.

Gabe, of course, will have to defend or surrender the buckle in 6 months at Ratification.

It was rad to be able to hand the buckle off to someone deserving. and…. I can\’t wait for my rematch in six months. My belt feels a little less than it\’s full self. 🙂