[via Treehugger and EarthFirst.] 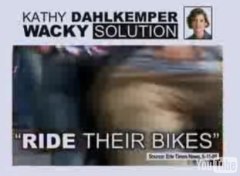 In honor of Rep. Earl Blumenauer’s call to “hold the weasels accountable” and taking a cue from the League of American Bicyclist’s “Trash Talk” campaign, here’s a political attack ad (watch below) from Pennsylvania that is simply shocking.

The National Republican Congressional Committee is running an ad against Kathy Dahlkemper of Pennsylvania (she’s leading a close race against Republican incumbent Phil English) that points out her “wacky” ideas. Among them are the appalling fact (sacrasm) that she says one way out of our energy mess is to walk and bike more.

After pointing that out, the narrator in the ad says sarcastically, “Hmmmm… why don’t we use dog sleds too.”

Watch the ad below…