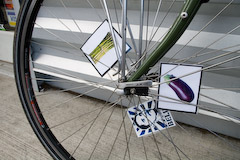 One of the best things about living in Portland is meeting other fun people and their bikes, and going on group rides lends a bit of camaraderie to a sometimes-lonely activity. Last year, on one of his weekly rides to the Portland Farmers’ Market at PSU, Sean Sullivan decided his life would be not unimproved by a little more fun and camaraderie, in addition to the two staples of biking and local produce.

What does it take to organize a ragtag bunch like this? “I just announced it to friends Facebook, Twitter, the Shift list, even Craigslist…and people show up,” said Sullivan, who has dubbed his effort “bike2market.”

The ride meets at Ladd’s Circle every Saturday at 9:30am. So far, the rides are small, manageable and growing: two weeks ago when I tagged along, there were seven of us, double the last week’s attendance.

Sullivan says that he’d eventually like to start other, simultaneous rides around town. “What I’m hoping to do is eventually organize rides in North or Northeast Portland, but this one needs to become self-sustaining first — maybe, twenty committed riders a week.”

As a bonus for coming along with Sullivan, each of us received a collectible vegetable spoke card which he had designed, printed, and laminated as a fun bonus. With this year’s farmers’ markets stretching all the way to mid-December, collecting ’em all will be only for the truly ambitious — and the pair of Brompton riders who came along for the ride certainly do not have enough spokes.

Speaking of which: there is, as always, a fine line between the beautifully practical and the wonderfully ridiculous, all of which are on display on any group ride. In addition to the Brompton afficionados with their integrated front-mounted messenger bags (!); and one participant sported a vintage mountain bike paired with a custom powdercoated, bright red Bob trailer that matched the bike frame.

If you too, want to ride with a group in style to the Farmers Market on Saturday, you can meet-up with Sean and the group, Saturdays, 9:30am at Ladd’s Circle, in front of Palio. Go get your vegetable spoke card! 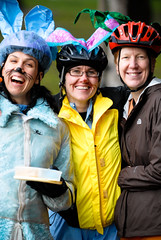 Dress up for a hoppin’
good time this Sunday.
-Slideshow below-
(Photos © J. Maus)

Continuing a proud tradition that started in Portland in 2004, this Sunday (4/12) bikers all over the city will don their best bunny costumes to help ring in Easter and the spring season.

My family and I have taken part in the Bunny on a Bike ride for several years now and it’s always one of the most enjoyable rides of the year. It’s a great way meet some great folks, enjoy a ride through your neighborhood and show off your bike-fun flair.

The ride starts from multiple locations throughout the city (see list below) and then converges on the Eastbank Esplanade (near Vera Katz statue). From there, the entire group will ride to a final, secret destination for a big potluck and Easter Egg Hunt.