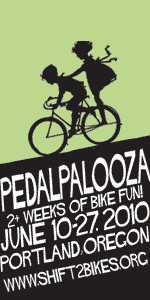 Welcome to our coverage of Shift's Pedalpalooza. Keep it tuned right here for a daily roundup of rides, ride reports, links to photos and videos, and more.

Help us share the bike fun! Fill out a Ride Report via our convenient new form.

Scroll down for the latest headlines and contact us if you've got Pedalpalooza news tips.

With Rob Anderson (team P/T Rehab, category “wrist”) as rabbit and KBott (team P/T Rehab, category “hip”) as sweep, we stuck together as a good pack through the near-40 miles of starts, stops, ups, and downs. Our crew of 20 rockstars included folks training for STP, one rider prepping for a 5-week backpacking trip in Alaska, many just out for more hills, a daily Tabor-rider, a woman sporting a recently-broken elbow, a founding member of Team Awesome, that guy who did the Ronde on a hybrid while smiling (oh, Jonathan), a true Fred, and one lady rocking a Hawaiian dress (go Erin!).

We rolled upriver from Salmon St Fountain, took a lane on Barbur, and then it was up Riverview Cemetery and down the Terwilliger Curves (no slowing here!). Regrouping on the Hawthorne Bridge, we swung through Ladd’s and up the Harrison/Lincoln rise – then up to the top of Mt Tabor, where we saw bike-yoga in action! Down Tabor, 205 bikepath to Mt Scott, where we tried out a new approach to near-summit, sprinted up two steep dead-ends, gauged daylight as little, and called it a night. Some debriefed @ North with beers, others opted to grab some Voodoo dinner on their way instead or sped home to tuck their chickens in for the night.

Thank you all! for coming out and making this happen. Interested in more hill riding? Drop me an email – we could make this a habit.

Ride Report
Approximately 18 intrepid, um, “soles” participated in the ride, including two barefoot, one Vibram Five Fingers, a Brompton cyclist wearing vintage pink leather mary janes, the raddest tweenager I’ve ever met in my life on a BMX, and one dachsund.

We also picked up two skateboarders at the start site, who skated with us barefoot in solidarity. Prize for most extreme footwear went to the woman wearing the tallest, most exquisite lucite heels I’ve ever seen. She had to remove her toe cages in order to ride–now that’s dedication to footwear!

If I were to lead the ride again, I think I would make the hour-long loop a bit shorter…not only did we lose a few riders halfway through (hopefully not due to foot fatigue!!) but also we rode along fashionable NW 23rd Ave for a bit, and the folks dining al fresco must have serious Pedalpalooza ennui by this point, because they hardly blinked an eye at us.

Still, we got lots of shout-outs, complimented several pedestrians in fine footwear, and spotted two other cyclists ferrying canines (Pet Ride next year, anyone??). Eight riders (counting the two skateboarders) finished the route.

Thanks for participating everyone!! You made my day!

Ride Report
We had a fantastic time last night on the Tandem Ride. After my husband and I bought our tandem last year we knew we had to organize a ride for Pedalpalooza and we are so glad we did. We had 17 riders and 2 dogs join us through NE Portland. The ride started at Irving Park and ended at Peninsula Park with a relaxing picnic in the roses. Thanks to everyone who joined us too!

Pictures can be see here

Ride Report
We had misty rain like the fjords of Norway, where Sven & I come from and our ride was in the shadow of WNBR — but still 25 Shiny friends showed up to our first Mobile Dance party in Portland, Oregon. Apologies for our technical difficulties with our sounds system, but after some creative problem solving we had some fantastic techno beats going as we mostly danced downtown at Silver or Gold landmarks.
– Our photos are in this set of our Last Day in Portland
– Also, Best of Sven & Greta in Portland photos here

Ride Report
I randomly decided to try out the Mountain Hardware race up to Washington Park.

I got there right when it was supposed to start and got a bit confused because there was no one there. Turns out, I was the only one there. Luckily, two of the employees were getting paid to race with me. Rather than a hardest gear ride, it turned into a fixed/ss race. We cruised around then raced from Burnside and 23rd up to the entrance.

It was pretty exhausting, I think we all had to step on our pedals pretty hard. Im not sure if it was because I was all pumped to race or because they were getting paid to ride, but I won. I would have gotten the free bag anyways, but it was nice to win for real.

Maybe next year there will be some competition. Im sure I will try to hold my crown.

Ride Report
I had the idea to ride to Boring along SpringWater Trail. We had 8 riders ready fora peaceful night ride. Seems I didn’t read BikePortland when the trail was reported closed. We rode from Laurelhurst to the trailhead and found it closed. Special thanks to Amos for helping us re-route. We cruised up to the 205 trail, over the river and back. Stopped at Shari’s and a nice peaceful ride was had by all.

Ride Report
Alas! Twas naught but my co-leader, Julie and I who enjoyed this fun adventure. But we had a blast.

Coffee and treats at Anna Bannana, a ried over to the craft convention, Summit of Awesome”‘s Show of Awesome at the Doug Fir lounge. Some checking out of the shops on East Burn. Hanging out at Powell’s.
April Winchell was hilarious, and we got to meet her AND we are both pictured on the Regretsy website!

We ended with burritos at Cha Cha Cha’s. Yum.

Wednesday brings opportunities from the City of Vancouver, Microcosm Publishing, Attorney Mark Ginsberg, dance troupe the Sprockettes and Oak Park Skating Arena among others.
Check the following links for ride details and keep an eye on the official Pedalpalooza calendar for last minute changes.

Share the fun with our Ride Report Form and watch for Pedalpalooza news on our Pedalpalooza Special Coverage Page.
END_OF_DOCUMENT_TOKEN_TO_BE_REPLACED

Hammercise takes to the streets

What do you get when you cross the moves of MC Hammer and the 80s aerobics phenomenon of Jazzercise? Yes, that’s right, Hammercise.

Created by Portland’s most energetic and colorful bike-loving dancers — GiGi (Sarah Goforth) and Harry Fabulous (Jon “Dutch” Paglia) — Hammercise is the new dance craze that’s sweeping the city. It makes sense that it comes from Dutch and Sarah. Dutch is a member of acrobatic troupe Kazum (in addition to being a fearless gravity biker) and Sarah is one of the original members of the Sprockettes (where she’s known as Agent Standard Deviation if you’re curious). END_OF_DOCUMENT_TOKEN_TO_BE_REPLACED

You could start and finish today’s bike fun in Southeast near the Cartopia food cart cluster. That is, if you don’t get too tired riding to Camas, roasting coffee beans, eating hors d’ouvres on I-5, walking in Northeast, cruising in heels, climbing some hills, eating some pizza, doing sunset yoga, singing karaoke or watching bike erotica.

Share the fun with our Ride Report Form. We’ll be posting some of these and other Pedalpalooza news on our Pedalpalooza Special Coverage Page.
END_OF_DOCUMENT_TOKEN_TO_BE_REPLACED