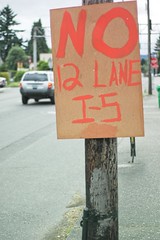 An editorial in this morning’s Oregonian criticizes Bicycle Transportation Alliance leaders for their recently stated opposition of the plan to build a new, 12-lane highway bridge over the Columbia River, and for encouraging their members to attend a rally in opposition to the plan.

Claiming that the BTA seeks “to destroy the bridge,” the editorial board advises the organization to “broaden its reach” instead of compromising the “fragile coalition” of interests working on the project.

And, oh by the way, it’s a terrible move for cyclists, too. The governors of Oregon and Washington have promised that the new I-5 bridge will be the most environmentally friendly bridge ever built, providing vastly improved access for cyclists and walkers, in addition to light rail and tolling to control congestion. 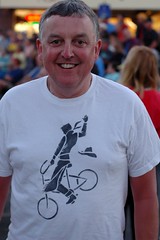 Jonathan Nicholas, the author and journalist who is considered the soul of Cycle Oregon and who has shared his insider observations on Portland’s bike scene for over two decades, has decided to take a buy-out offer from The Oregonian and will leave the staff position he has held there since 1982.

His decision was first reported by Byron Beck of the Willamette Week on Friday and I’ve confirmed the news with Nicholas this morning.

In an email today, Nicholas wrote that he’ll leave the paper after the November 4th election. When I asked him what it was like covering bike issues then and now he wrote: