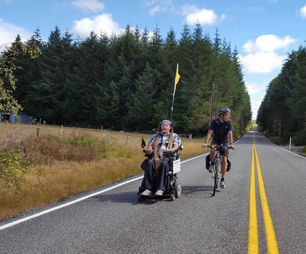 Very few people would ride 300 miles on a bicycle just to raise awareness for a cause they believe in. Ian Mackay is doing it in his wheelchair. And what is it that he believes in? Better paths and trails so that more people in wheelchairs can get around safely and efficiently.

Mackay started from his hometown of Port Angeles earlier this month and is slated to arrive in Portland (his final destination) on Tuesday.

Mackay became a quadriplegic after a bike crash eight years ago. He understands the value of off-highway paths in large part because he lives right next to one. In fact it was his access to the Olympic Discovery Trail that helped him deal with post-accident depression. Instead of being “mopey” and watching television, the trail gave him a way to explore his neighborhood and enjoy life once again. Now he wants others with spinal cord injuries to have the same opportunity.

Here’s what he told The Olympian newspaper last Thursday:

“On the Olympic Peninsula I’m spoiled rotten because I can hop on a trail and go either way and commute to wherever I’m trying to get to. I have a lot of brothers with spinal cord injuries that would really like to do similar things and often the trail systems aren’t accomodating for wheelchairs so I wanted to demonstrate first off that the disabled and people in chairs do use bike paths and trails and multi-use paths. And by being out there and people seeing I hope to bring some advocacy to that.”

Since he’s been exploring the trail outside his home he’s put 5,000 miles on his wheelchair. Mackay says on his website that he’s a “well-known feature” on the local paths.

Given his love of exploring bike paths with friends and finishing off a day’s ride with craft beer (he ends each days 20-30 journey at a pub), we have a feeling Mackay will become pretty well-known in Portland too.

Stay tuned for updates on his visit as he gets into town tomorrow. We’ll post any meet-up spots on Twitter. Word has it he’ll end his trip in Waterfront Park.