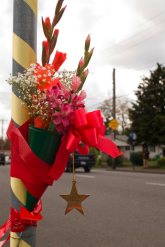 Flowers placed as a memorial
near the location where
Bernick was hit.
(Photos © Dan Liu)

Last night, BikePortland news intern Dan Liu and I visited the scene of the collision that killed Cary Bernick on Monday evening.

We timed our arrival to match that of the crash itself, shortly after 5pm. There wasn’t a ton of traffic. Biking up and down the Halsey/Weidler couplet (that’s wonk-speak for two, one-way streets) doesn’t feel exactly safe — you have to look sharp — but it also isn’t the terrifying freeway on-off ramp I expected.

Dan and I stood for a while looking at the crash scene. It had rained heavily all day and dried out several hours beforehand. Someone had tied a bouquet of flowers to a nearby street sign with a yellow ribbon, and another bouquet was laid carefully on the sidewalk. We later learned that the flowers were placed by Bernick’s wife, brother, and his brother’s girlfriend. Shortly after we left, a ghost bike was chained to the same spot.