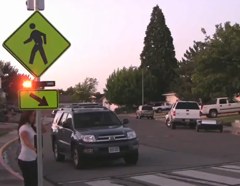 A rapid flash beacon at work.
(Photo from beacon manufacturer)

The Oregon Department of Transportation flipped the switch on a new crossing treatment on SW Barbur this morning. The location, south of SW Hamilton Street near Rasmussen Village, is just up the road from where Angela Burke was struck and then killed on December 15th, 2010 by Caleb Pruitt as he sped south on Barbur.

Burke was walking her bike, attempting to cross the street, when she was struck. Pruitt received a 60 month prison sentence in the case.

The Multnomah County District Attorney is set to formally accept a plea deal between the family of Angela Burke and Caleb Pruitt.

Late at night on December 15th, Pruitt drove his Subaru Impreza at a high rate of speed (according to Police) on SW Barbur Blvd and struck Burke as she walked her bike across the street. Burke, a 26-year old from Albany, New York who had just recently moved to Portland, died in the collision.

Caleb Pruitt, the man charged with manslaughter for his involvement in the fatal collision that took the life of Angela Burke as she attempted to cross SW Barbur Blvd on December 15th, has posted bail and is currently on house arrest at his family home in Hood River.

Pruitt was initially charged with Driving Under the Influence of Intoxicants and Criminally Negligent Homicide, but after Portland Police investigators and the Multnomah County DA’s office learned more about what happened that night, they upped the charges to include Manslaughter — a crime with a minimum prison sentence of 75 months. 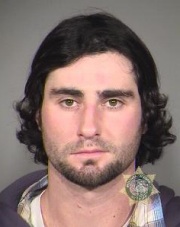 After two weeks of testimony, a Multnomah County grand jury has upgraded the charges against Caleb Pruitt, the 28-year old man who struck and killed Angela Burke with his car as she attempted to cross SW Barbur Boulevard on December 15th.

Pruitt was arrested that night and booked on charges of Driving Under the Influence of Intoxicants and Criminally Negligent Homicide. According to a witness, Pruitt had been drinking, was driving very fast and was unable to negotiate a sweeping corner on Barbur prior to the collision.

During the Grand Jury process, the Portland Police Bureau Traffic Division’s Major Crash Team worked to upgrade those charges because they felt like Criminally Negligent Homicide — which could result only in probation — did not adequately reflect the severity of Pruitt’s actions.

In large part due to the testimony of the PPB’s Major Crash Team, evidence they gleaned from the scene, and their of analysis of what happened that night, Pruitt is now charged with the following:

A few things have come across my desk recently about Angela Burke that I want to pass along.

First, a commenter named Nick who worked with Angela recently shared the chain of events that led to Angela being on a bike that night: 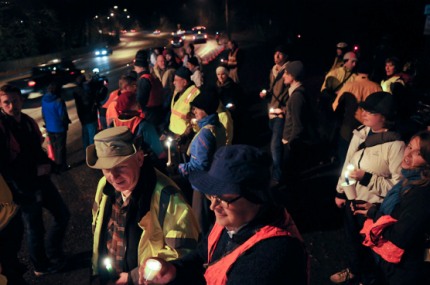 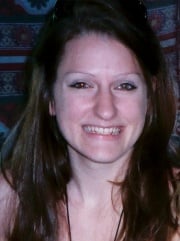 Tonight, people from throughout the Portland region will gather in a gravel turnout adjacent to SW Barbur Blvd to remember Angela Burke (full details below). The 26-year old woman was hit and killed on Wednesday night by a man driving a car who has been charged for DUII and criminally negligent homicide (due to driving at “a high rate of speed,” police say).

Burke was walking her bike in the bike lane attempting to cross Barbur about three tenths of a mile south of SW Hamilton Blvd when she was hit. Police are continuing their investigation of the crash and the Multnomah County District Attorney’s office is preparing the case for the grand jury.

Piecing together a picture of who 26-year old Angela Burke was has been difficult. Now I know why.

Today I got a call from her mom, Athena Burke. Ms. Burke, fighting back tears throughout our conversation, said her daughter had just moved to Portland a month or so ago and that she “was lonely and hadn’t found her people yet.” Given what I know about Angela now, I feel like it would have been just a matter of time until some of us would have eventually become her “people.”

Angela was from Albany, NY. Ms. Burke said Angela packed up and moved here after finishing college. “She just did this huge trip and moved out there, she was so brave. She knows a million people out here, but we have no one out there.”

The Bicycle Transportation Alliance and the Willamette Pedestrian Coalition have just announced a vigil for Angela Burke:

In cooperation with Southwest Neighborhoods, Inc. and Friends of Barbur, a quiet vigil for Angela Burke and all who have lost someone close to them on the roadway will be held Monday at 5:30 pm, tentative location near the corner of SW Barbur Boulevard and SW Hamilton.

See the full press release below…

Portland, Ore. – Angela Burke, a 26-year old woman from New York, was struck and killed while walking her bicycle across SW Barbur Blvd. on Wednesday night. Caleb Pruitt, the driver who killed Ms. Burke, was arrested on allegations of negligent homicide and driving under the influence of intoxicants.

According to the police report, “Investigators learned that just prior to the [crash] Pruitt was driving at a high rate of speed and appeared to lose control of the car before striking Burke and killing her.”

In a crash, the risk of serious injury or death increases exponentially as speed climbs higher than 20 miles an hour. On SW Barbur Boulevard, people riding in the bike lane or walking on the sidewalk are only a few feet away from cars traveling at 50 miles per hour. Wednesday’s tragedy shows us that a death can result from something as simple as crossing the street.

Steph Routh, Director of the Willamette Pedestrian Coalition: “Ms. Burke’s death was as senseless as it was preventable. In our community and in our region, everyone should feel safe while walking or biking on our roads. There is no higher priority than preserving life. This tragedy is a mournful reminder of how far we have to go in terms of traffic safety.”

Transportation safety advocates and organizations, including Friends of Barbur, the WPC, and the BTA, have been working to improve safety on the Barbur Bridges (the narrowest and most uncomfortable sections of SW Barbur Boulevard for bicyclists) but these improvements – though critically important – are not enough.

Rob Sadowsky, Executive Director of the Bicycle Transportation Alliance: “Our street environment must prioritize the safety of people walking and biking. We cannot tolerate anything less. Speed and crash reduction must play a major role in the BTA’s advocacy initiatives, legislative agenda, and Vision Zero safety campaign. “

We – as advocates, as transportation authorities, as parents, as people who walk and bike and care about the safety of our neighbors – must take swift action to make significant safety improvements along the entire length of SW Barbur Boulevard, and on every street where people are walking and biking near motor vehicle traffic above 20 miles per hour. We call on state and local transportation authorities to make a commitment to lowering speeds and enforcing safe behavior

We mourn the loss of Angela Burke and extend our sincere condolences to her friends and family. We cannot imagine their loss.

In cooperation with Southwest Neighborhoods, Inc. and Friends of Barbur, a quiet vigil for Angela Burke and all who have lost someone close to them on the roadway will be held Monday at 5:30 pm, tentative location near the corner of SW Barbur Boulevard and SW Hamilton.

Participants are encouraged to bring a candle, lights, and personal signs commemorating Angela, a loved one or call for safer streets. More information regarding exact venue available on BTA and WPC websites and Friends of Barbur Facebook page as it is confirmed. 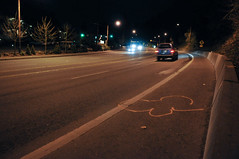 Looking south on Barbur about .3
miles south of SW Hamilton. The
orange paint is where Angela Burke’s
body came to rest. The apartment complex is
in the upper left.
(Photos © J. Maus)

Last night I went out to SW Barbur to get a better sense of the scene of the fatal crash that occurred there Wednesday night.

By way of markings in the street painted by Portland Police Bureau crash investigators, Angela Burke’s body came to rest about three tenths of a mile south of where SW Barbur Blvd (99W) crosses SW Hamilton. The collision occurred directly across the street from a parking lot and just a few feet north of the entrance to the Town and Country Apartments at 4800 SW Barbur (map). 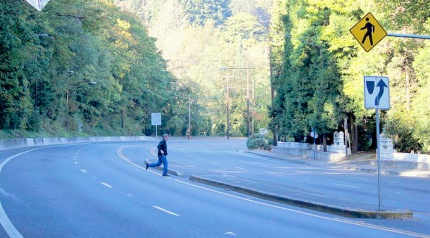 “They just keep happening. There were two last night… It’s hard to keep talking about the same thing over and over again. I feel like I can just cut and paste.”
— Stephanie Routh, Willamette Pedestrian Coalition

Biking, walking and neighborhood advocates are frustrated and saddened by the news of a fatal crash that claimed the life of 26-year old Angela Burke on SW Barbur Boulevard last night. For them, the crash isn’t just about one allegedly drunk and negligent man driving a car and a woman who lost her life, it’s about a street that is known to be very unsafe and that is widely known to be in dire need of safety improvements.

In a phone interview today, Stephanie Routh, executive director of the Willamette Pedestrian Coalition (WPC), called Angela Burke’s death a “senseless tragedy” and was clearly frustrated by yet another headline of someone being killed while walking. “They just keep happening. There were two last night [a man was also hit and seriously injured while walking on N. Lombard]… It’s hard to keep talking about the same thing over and over again. I feel like I can just cut and paste.” 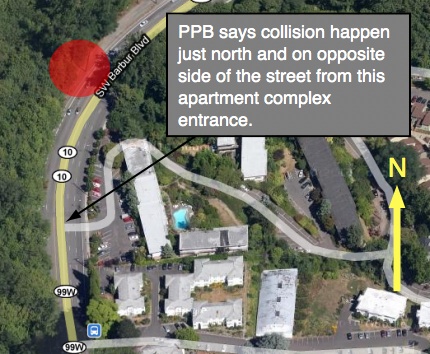 Red area is approximate location of collision. The woman was walking southbound (west side of street).