“…a pedestrian, a bicyclist and an automobile driver enter an intersection. The person in the car turns and hits either the person on foot or the person on the bike, killing her. Question: What happens to the driver? In most states, nothing.”
— Alex Marshall, Senior Fellow at The Regional Plan Association

– The opinion pages of Sunday’s NY Times featured an interesting take on the ethics of illegal bike riding from Randy “The Ethicist” Cohen: If Kant were a New York Cyclist.

– The driver of an Olympic bus was arrested after they killed a person riding a bike while transporting members of the media between events.

– In reaction to the collision at the Olympics, Tour de France winner Bradley Wiggins suggested victims of collisions can’t “argue” with the outcome if they’re not wearing a helmet but later insisted he was not calling for mandatory helmet laws.

“…a phrase that has popped up around the country as cities spend more transportation dollars on transit; add streetcars, bus and bike lanes…”
— NPR’s Franklyn Cater discussing the “war on cars”

– Grim news this week from the National Highway Traffic Safety Administration who estimate traffic deaths have jumped 13.5% from the same period a year ago.

– The Tour de Cure lured over a thousand people and their bicycles to the roads in Washington County, raising $400,000 for diabetes education, research and advocacy.

“Picture 11 miles of smoothly paved bike path meandering through the countryside. Largely uninterrupted by roads or intersections, it passes fields, backyards, chirping birds, a lake, some ducks and, at every mile, an air pump…”
— The New York Times

– One of the victim’s in the horrific theater shooting in Aurora, Colorado was in the middle of a cross-country bike tour. Thankfully, he’s on the mend and just might finish out his ride.

– The much-anticipated launch of New York City’s bike share system has been pushed back a month due to concerns around the system’s software.

– There are those who thought it would never happen but a man riding a bicycle ran a red light and struck a car in Boise, Idaho.

– Bay Area-based Clif Bar celebrated its 20th anniversary by giving every single one of their employees a personalized bicycle.

– Despite Republican support for mass transit on the Tappan Zee Bridge, New York Governor Andrew Cuomo has formed a partnership with anti-transit advocates who want to see the bridge built around the needs of what they’re calling “smartphones with four wheels”.

– If you’re new to riding with children you may want to have a look at this oldy-but-goody article from Totcycle on the safety of family cycling as well as this advice for cycling with children from Grist.

“If I didn’t bike to work, I’d spend my weekdays almost entirely indoors… On the bike, I get trees, air and a great way to get to know city neighborhoods.”
— David Keegan,
The New York Times

– The Chicago Tribune talks to officials in San Francisco and Chicago who expect a “bicycle boom” thanks to those cities’ ambitious plans for expanding and improving infrastructure for bicycles and car sharing systems.

– There’s some confusion as to whether the new federal transportation bill increases or decreases funding for bicycling infrastructure and if you’re looking to do your own research you might want to have a look at this extensive collection of information about the bill.

“Once the province of aggro bike messengers and pressed-for-time deliverymen, cycling has gone mainstream in much of New York City. “
— TIME Magazine

– The auto industry has finally come up with an environmentally friendly car. The Onion has the scoop on the new Prius “Solution” model.

– There’s another example, this time from Berkley, CA, of a hit-and-run driver being brought to justice because of the footage from a bicycle-mounted camera.

“…biking and walking save money, promote better health than sitting in a car, and ease traffic congestion, which makes the city more livable for everyone. Opponents of bike and walking paths are going to have come up with a better reason than an ominously named UN document.”
— The Economist

– The Tour de France kicked off this past week, and so did the epic journey of six women (including two from Portland) riding the route one day before the men as part of the Reve Team.

– A study from Canada, presented at the Velo-City conference, clearly shows traffic diversion is essential for safety on residential streets and looks at the relative safety of other infrastructure.

– Officials have yet to issue any citations after a man driving a pickup and a woman riding a bicycle collided in a crosswalk in Hillsboro. 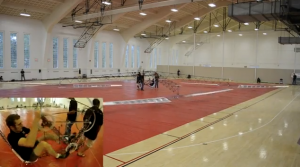 The pedal-powered Gamera II helicopter
is close to hovering for a full minute.
(Screenshot of video by Team Gamera)

– Portland’s own Elly Blue discusses a study from an Oregon-based research group that shows automobile use and economic growth don’t correlate like many have previously assumed.

– There’s a detailed proposal gaining attention to transform abandoned logging roads into a mountain bike and backpacking trail system in the Mark O. Hatfield Wilderness on the northern side of Mt. Hood. 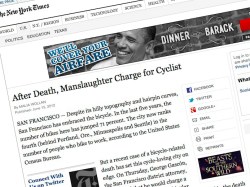 – The man who struck and killed a person in a crosswalk while riding a bicycle in San Francisco was charged with felony vehicular manslaughter and is now expected to surrender to an arrest warrant. The story has garnered national media attention, including stories in , the Los Angeles Times, and the Wall Street Journal.

– The 2012 Reve Team — a group of women (including two from Portland) that will attempt to ride the entire Tour de France route later this month — got front page coverage in the Sunday Oregonian. 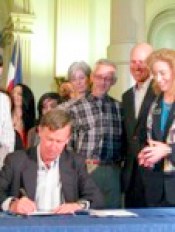 – Ray LaHood is excited for the Green Lane Project (which Portland is a part of), saying the “DOT and the Federal Highway Administration like traffic-separated lanes because they increase safety.”

– There will be 2,000 fewer buses on Ottawa, Canada streets each day after the city shifts much of its bus traffic to light rail which will open up of space on city streets for the “bike lanes of the future.”

– 18 year-old Nap Cantwell, son of Elysian Brewing’s owner and the deputy curator for the Seattle Art Museum, passed away after he was involved in a collision with a motor vehicle while riding his bicycle in Seattle. 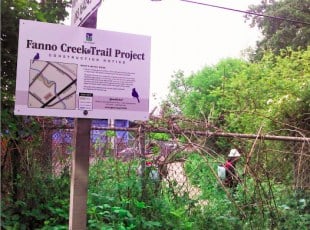 Getting cleaned up.
(Photos and story by Will Vanlue)

The Fanno Creek Trail, which the Tualatin Hills Park & Recreation Department is grooming for a name-change to the Fanno Creek Greenway, will soon be a little safer for people traveling around Main Street in Tigard.

I was passing through the area the other day and noticed crews spraying herbicide on overgrown blackberries on an existing but inaccessible piece of the popular path north of Highway 99. 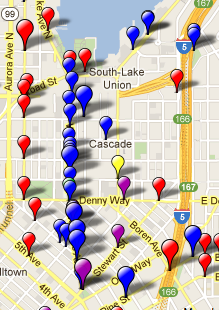 Can you find the streetcar tracks
on this crash map?
(Screenshot of BikeWise.org
by Seattle Bike Blog)

– We love this “Cycles of Life” comic by Grant Snider as found on his Incidental Comics site.

– A man has been acquitted of charges he struck an elderly person with his bicycle after it was determined police mistook him for another person in a Giants jersey one game-day in September of 2011.

– A recent U.S Supreme Court ruling supports strip-searches of people who commit minor offenses, including “riding a bicycle without an audible bell.” 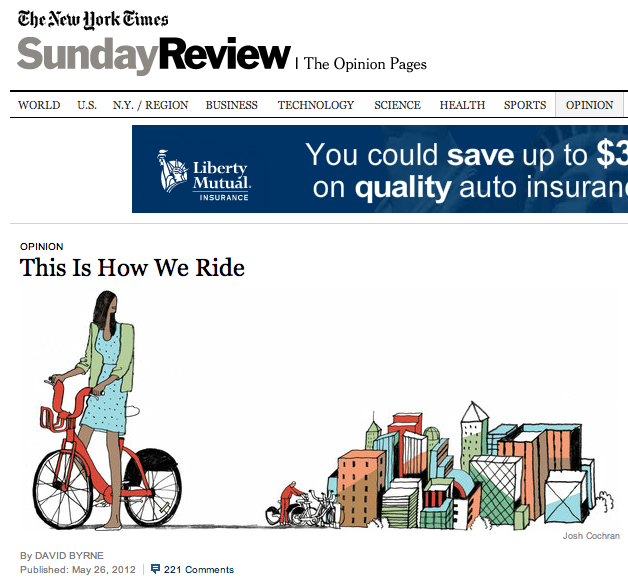 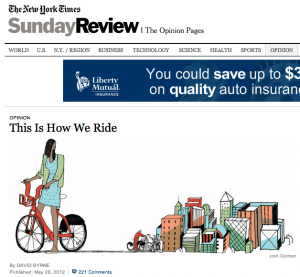 We hope everyone takes time today, on Memorial Day, to remember those who have served our country.

Once you’ve done that, have a read of the top news and other cool stuff that caught our eyes this past week…

– If you’re out riding today you might want to be extra-vigilant; it turns out more people run red lights while driving a car on Memorial Day than on other comparable days.

– Three new routes in the US Bicycle Route (USBR) system were approved and received their official designations: USBR 35 in Michigan, USBR 45 in Minnesota, and a realignment for USBR 1 in North Carolina.

– A study from the Brookings Institue has found real estate values are higher in neighborhoods which are more accesible to walking, biking, and taking transit and the study has already received attention from The New York Times.