Every year since 2010, Portland cyclists have taken to the streets donning their finest patterned wool apparel to participate in the Tweed Ride. This annual celebration of cycling from a bygone era has been on hiatus since the pandemic, but it was back this year, and was a jolly good time indeed.

The idea for a tweed-themed bike ride came from the Brits, who held their first ‘Tweed Run’ in London in 2009. Anglophiles across the pond were compelled by the idea, and it took off in Portland the next year. 2010 may have been the height of late-aughts Portland hipsterdom, so fully embracing handlebar mustaches and pageboy caps was really just a natural step for the city’s cyclists to take.

Shawn Granton, notable Portland historian who led the ride, said there were fewer people at the event this year than there have been in years past, with about 30 people showing up to ride in tandem around the city. But what we lacked in numbers, we made up for in style. 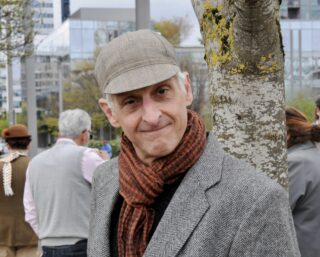 “I pretty much wear this kind of thing every day. The Tweed Ride is kind of the perfect ride for me.”
— Ken S.

We didn’t know the route ahead of time, as organizers wanted to keep it a mystery, but we ended up taking a tour of Portland’s inner east side, starting at Grant Park and making our way to the Tilikum Crossing before heading up the west side to the Pearl District, where we stopped for a picnic and tea party. All the while, of course, amused passersby enjoyed an old-school fashion show.

The most dedicated among us dug out their most antique bikes in order to really embody the Victorian-era aesthetic. It was fun to pretend to be a cyclist from the earliest biking days, but I’m glad we have more mobility options now. I am grateful we can still enjoy the best parts of those halcyon, sepia-toned, early bicycling days while riding 21st century bikes. (I am also grateful that women can wear pants now instead of corsets and petticoats that got caught in the spokes!)

Though rain and wind came later in the evening, the skies stayed calm for us during the ride. It was perfect tweed weather: not too hot and not too cold, but still slightly gloomy and London-esque.

Some participants said they didn’t have to dig around too deep into their closets to come up with an outfit.

“I pretty much wear this kind of thing every day,” Ken said. “The Tweed Ride is kind of the perfect ride for me.”

So, what’s the appeal of cycling in tweed? Participants say it’s a way to pay homage to the olden days of bicycling, but more than that, it’s a chance for people to embrace Portland’s quirkiness, and hopefully bring a perplexed smile to some people who see the crowd on the streets.

“With everything so negative in the world, it’s nice to see happy people on bikes,” Emee Pumarega, a longtime Tweed Ride fixture, said.

I was very impressed by the styles from everyone at the event and will be taking inspiration from their classy dress going forward. Huffing and puffing up a hill on your morning commute looks a little more sophisticated if you look like a Sherlock Holmes character. Enjoy these photos from the ride — I’ll be over here scouring thrift stores for tweed for next year.

Thank you for the write-up, Taylor! It was lovely to have you along for the ride.

Quote of the day: “But what we lacked in numbers, we made up for in style.’…especially with Ken along for the ride!!

And as for ladies ‘riding in pants’, nothing quickens my heart but the first rides of spring and when winter pants turn to skirts (or kilts)!..especially if its my lady on her single speed dutchified Canondale T400.

I’m gonna start a turn of the century ride where everyone has to wear those “juicy” sweatpants, bedazzled lo-rise denim, and ed hardy t-shirts!