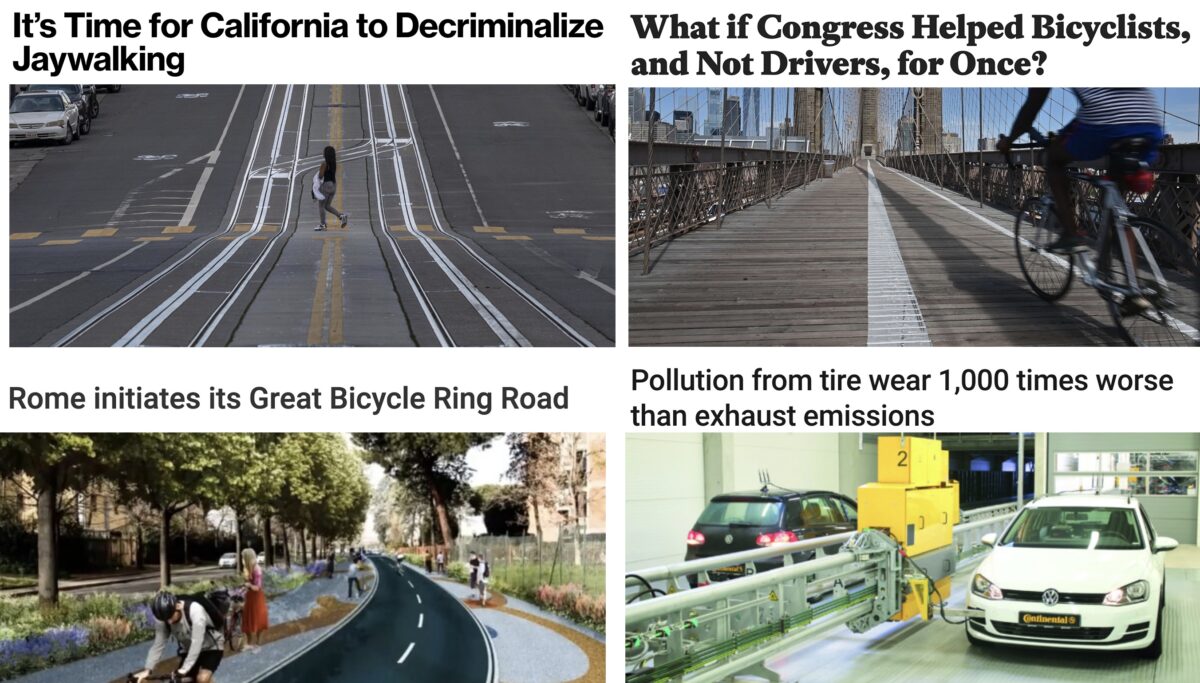 Hope you are staying dry out there — or that you don’t mind getting wet!

Toxic truckers: A 16-year-old appears to have deliberately assaulted, rolled coal, and then ran over a group of bicycle riders in Texas. It’s a disgusting yet totally predictable outcome of the volatile mix of car supremacy culture, toxic masculinity, and a host of other systemic, societal dysfunctions. A GoFundMe has been set up for the injured riders.

Carfree street secrets: An urban planning professor analyzed 125 pedestrian malls in America to determine the keys to why they worked — or didn’t.

About those car tires: Another terrible and unregulated aspect of car supremacy that car advocates (EV or not) need to explain is the toxic particulate matter that comes off of tires, which one study has found is 1,000 worse than exhaust emissions.

Gravel goes prime time: After years of growing popularity, the UCI says gravel racing will become a legit discipline with an international series and its first World Championship in 2022.

Your footprint matters: This environmental reporter says despite the viral narrative that individual carbon footprints don’t matter because Big Oil created that lie, the choices we make actually do matter in some ways.

Crossing the street is not a crime: A bill in California dubbed the “Freedom to Walk Act” would remove fines for crossing a street outside of a crosswalk — a traffic infraction often used as a pretext to hassle people of color.

When in Rome: The famous Italian city wants to hop on board the global push toward bike-oriented cities with a major bicycle ring road project.

Thanks to everyone who sent us links!

I don’t want to defend this kid particularly, I hope he’s never licensed to drive again, but the link in the linked story from one of the guys on the ride says that the kid was trying to blow exhaust at riders in a bunch behind him when he ran into another bunch in front of him. This witness characterized it as a “mistake”, which somewhat calls into question the “deliberate” nature of the assault. It’s bad enough that spinning it to make it seem worse is counter productive imho.

It’s bad enough that spinning it to make it seem worse is counter productive imho.

How is deliberately blowing noxious smoke not assault? Assault doesn’t have to be deadly or particularly painful. Spitting on someone’s jacket counts as assault pretty much everywhere and that’s realistically less dangerous than what this kid did.

He deliberately tried to assault one group of cyclists and then incidentally (not accidently) killed three people in his attempt.

If I come at you with a baseball bat and swing and miss you, but then accidentally hit a piece of glass that shatters, sprays everywhere, hits you, and injures you, the fact that the baseball bat itself didn’t hit you doesn’t make it not an assault.

Well, I don’t know what the law says, but it seems to me that taking a big drag off of a Benson & Hedges 100 and exhaling in someone’s face is not assault in the same way that swinging a baseball bat at someone is. This seems like aggrievement inflation to me. Also three people weren’t killed, several are hospitalized but nobody has died.

1. People don’t have to die for it to be assault.
2. The fact is that grave physical injury occurred as the result of an action that at the very least constitutes harassment and at the most constitutes assault. I’m no lawyer but I’m pretty sure that you can be charged for any injury or death that occurs in the course of any illegal act that you committed, regardless of whether that injury or death was intended (legal experts: please feel free to correct me if I’m wrong).

Yeah, but if you attempt to light your cigarette with a flame thrower, and you accidentally severely burn some bystanders, that is a serious matter.

In order to roll coal, the kid had to floor the pedal on a 400+ horse power motor in very close proximity to vulnerable human beings. If he had been chucking smoke bombs or fire crackers out the window of his truck, your analogy would work. But he was trying to mess with the cyclists using a powerful and dangerous weapon.

He chose to blow exhaust, which requires mashing the accelerator while in close proximity to people on the road. Even if the coal rolling itself is not considered assault in your mind, surely uncontrolled mashing of the accelerator and failing to ensure the roadway ahead of you is clear is reckless driving? We need to take off the kid gloves when dealing with people like this. They are “tough men” and can handle the consequences for their actions. What happened to personal responsibility in this country?

I agree, it”s reckless driving. Assault? Perhaps. But prove it based on what he actually did, not some angry fantasy version of what he did. As for being a tough man. It’s weird to me that identitarians of all stripes seem to agree that this sort of performance is “manly” and not childish. He’s a boy. Literally in this case.

I think in this case the driver did not fully consider the outcome of their intentional behavior. To say they regret it after, or that they didn’t intend the full extent of the outcome cannot be allowed to diminish the intention. Precisely because people don’t think things through before they take intentional actions and that leads to unintended harm.

It’s possible Mr. Noorah actually did form a malicious intent to kill before the impact, beyond the extreme recklessness of the act, but we will probably never know now that he has been smuggled out of the country.

Glad to see some attention being paid to the toxicity of car tires. This a great counterpoint to remember when people are hyping giant, heavy EV’s like the new Ford pick-up, Rivians, Teslas and even E-buses. Bikes, small vehicles, and rail!

The pollution from tires is under appreciated. Sorry Elon, your battery buggies are not going to solve this problem. The only solution is too move as little weight as possible with the least power to accomplish the task, so you can make the tires as thin, light and long wearing as possible. Looks like the old school roadies on 19mm tires are ahead of their time. Another reason old fashioned pedal bikes are the future.

Yeah, that does seem off. Although it was touched on in regards to NEE, the article didn’t seem to explicitly state that the test itself included the resuspension of road particles. If it did, that seems more plausible to hit that number (since it wouldn’t be all the weight coming off the tires/brakes directly) but I’d agree that it would still be a worst-case scenario.

So, roughly calculating, 150 lbs of tire/brakes generate 400 lbs of dust over 20000 miles.
It would be nice if more information was provided as to what that includes.

Yeah. Our sensory information conditions us to not really believe in invisible things. If cars left a trail of little pellets behind no doubt we’d be shocked at the amount of material they are putting out. I’m definitely more annoyed by passing 2-stroke vehicles, why are they even legal? And I’m pretty sure that black scuzz that shows up on rims and rim brakes is mostly other people’s tires.

We’ve managed to regulate, tone down and tune out the exhuast of modern internal combustion vehicles so as to make them seem innocuous. When a single study shows that something is 1000 worse than another thing the proper response is probably ‘oh bosh’.

If the exhaust of the average car appeared in semi-solid form, and it dropped in your backyard instead of being spread evenly all over town, it would be like having 38 dogs.

What would the behind-the-car-equivalent be of the guy behind the horses in the parade with the shovel and the bin on wheels?!

It’s impossible to guess what the consequences for the teen driver will be without knowing what provisions of the Texas criminal code may apply, but I would guess that reckless behavior that leads to injury must be criminalized in some fashion. If he can be prosecuted, obviously he should be. When it comes to sentencing, I disagree with treating minors as adults. Studies show that teen brains are still developing and that they do not have the same capacity as adults to contemplate consequences of their actions. That being said, along with any other punishment, a five year suspension of license seems to be in order. Regarding a civil suit, while there may not be much point in suing a 16-year-old, whoever bought the truck for him or let him use it is also on the hook.