The Monday Roundup: Beat the haters, the Parisian mindset, lessons from Peloton, and more 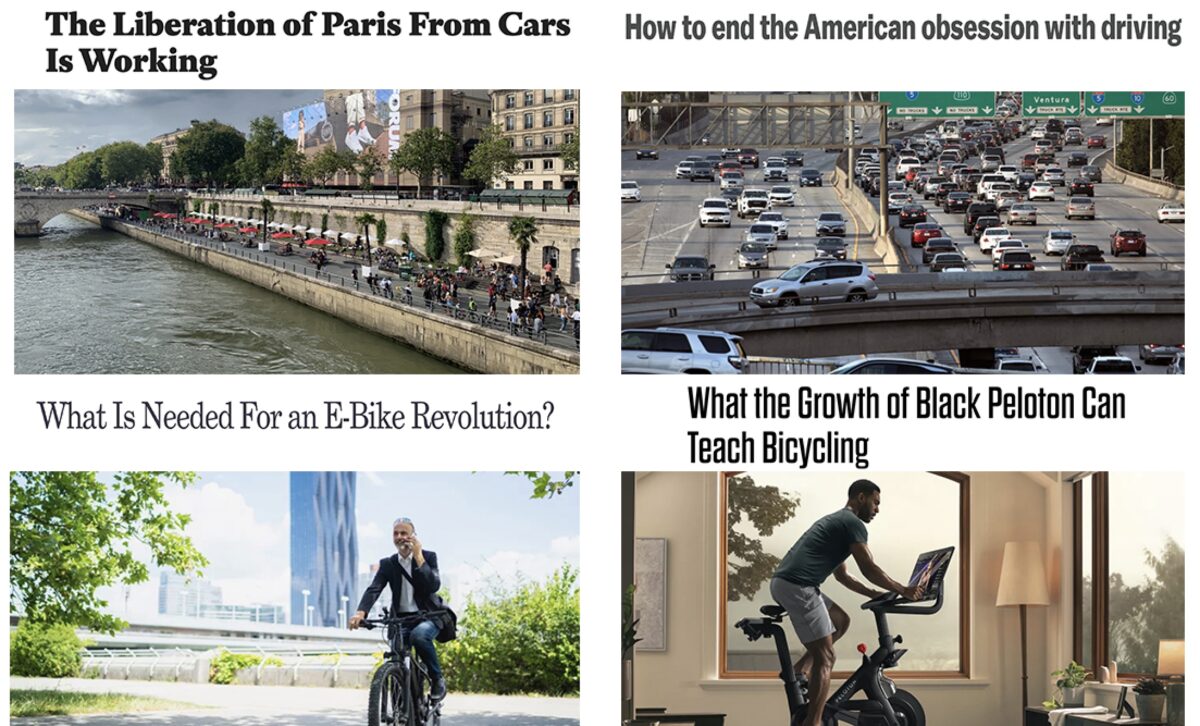 They have better lobbyists: Check out this comparison of the potential federal e-bike tax incentives versus the existing ones for e-cars. “Laughable” is right.

National Parks and bike paths: You can bet the folks who sit on the Historic Columbia River Highway Advisory Committee will be keeping a close eye on this new, 18-mile paved path that’s coming to Zion National Park.

The Paris mindset: “The redistribution of public space is a policy of social redistribution,” is just one of the gems in this interview with the deputy mayor of Paris about how their bike and low-car infrastructure has been such a success.

Beat the haters: This article from Streetsblog is an absolute must-read for advocates that’s full of real-world tips about how to push back against opponents of street projects.

‘Confessions’ review: This review of Strong Towns founder Chuck Marohn’s new book, Confessions of a Recovering Engineer, says that even though he, “never uses trendy ‘left-wing’ language” his criticisms of the road engineering profession are very powerful and important.

School bus scarcity: A shortage of drivers has led Massachusetts to call in the National Guard to keep school buses running.

Lessons from Peloton: Who knew that the indoor cycling giant would have lessons to teach the broader cycling world about how to be more welcoming and inclusive to Black Americans.

E-cargo FTW: Electric cargo bikes continue to transform the streets and the bike industry, as this dispatch from the Bike Europe trade show demonstrates.

Say you want a revolution: Turns out the the things we need to unlock the e-bike revolution are the same as what we’ve always needed for acoustic bikes. Who would have guessed that?

All Carmakers Are Bastards (ACAB): The trial has begun for VW, the auto company that used to be the title sponsor of America’s largest bike nonprofit, because they cheated emissions tests in a bid to make their cars look greener than they were.

Mainstream: Even Vox understands the climate change imperative of reducing driving and planning our transportation system in a completely different way.

Thanks to everyone who shared links with us this week!

I did that (partial) bike path five years ago. Zion is interesting. There are two branches on the main (paved) path through the park. One dead-ends, the other goes through a tunnel and connects to the east (eg headed towards Reef or Moab). Bikes aren’t allowed through the tunnel and there’s no real workaround. But it’s a nice workout to climb up to the tunnel.

OTOH, on the dead end route, private cars are banned during the busy season. So it’s a few cars going to the hotel, big tourist tram-buses operated by the Park, and cyclists/hikers.

The buses are super-good about giving a berth. There’s a thorn there that is terrible. I ran out of patches on my first mile checkout ride. So I switched to heavy ‘kevlar’ type tires.

I’ll go back when I’m in better health and ride it again. I took powered transportation up there but rode back to St. George because there are really pretty views (including looking up at the secret runway where they did rocket testing and ejection seat testing). Great area to ride with the caveat that it’s still the USA and all that.

You may be thinking of “Goat-Heads”. They are like caltrops, in that they always have a point sticking straight up.

You’re right. And it was October, which is apparently goat head season. Here’s an info page from Slime with a picture. Bad times!

And with the drought (goatheads are drought lovers), they’re working their way into the Willamette Valley. I’ve seen them along Marine Drive in Portland, along the bike path in Corvallis, and along River Road just north of Eugene. Not in abundance, yet, but in spots. I went back and dug up the plants in Corvallis and Eugene, but the seeds are still there ready to sprout anew.

Interesting that the peloton article was all glowing praise for the inclusive corporate culture and marketing campaign that’s leaning into social justice issues (which was something that didn’t really typify their image pre 2020 IIRC). They didn’t mention the disastrous 2019 holiday ad campaign that tanked their stock and had a lot of people criticizing the company for being sexist and body shaming women. It’s likely that a lot of the things that were being praised in the article were adopted as strategies that were intended to directly counter the reputational damage that was done to peloton in 2019. I would love to see some sales figures that track peloton over the last three years. I’d suspect that they were in bad shape in Q4 of 2019 and Q1 of 2020. They were just in an advantageous position to profit from the covid shut downs, and they seized the initiative.

Points about peloton’s success in creating a culture that appeals to minority groups that don’t feel represented by bike culture as a whole are well taken. But I think a more complete narrative of the history of this company would demonstrate even more how remarkable the recent success of this company has been.

The article really waxes poetic about the corporate actions, but I think this is the single biggest factor:

There’s also an element of safety that partially explains why Black riders might be drawn to Peloton over biking on the road. It’s a fact that traffic enforcement disproportionately affects BIPOC riders, resulting in over-policing and leading to “Arrested Mobility” with a slew of adverse social, political, economic and health outcomes. In America, Black people must face the ever-present threat of discrimination, intimidation and physical harm whenever they step outside, whether it be while driving, walking, running or bicycling. In the world of Peloton, that danger doesn’t exist. There, a Black man can virtually high-five a stranger without the possibility of it being taken the wrong way or putting his life and livelihood at increased risk.

Peleton blew up in popularity because most people don’t feel safe cycling outside. BIPOC riders have yet another barrier (noted above) that white people don’t have to worry about. IMO, Peleton shouldn’t be getting credit for this trend. It was already baked into the market.

Good point. If I thought there was a chance that I might get murdered in broad daylight just for jogging in the wrong neighborhood, like Ahmaud Arbery did last year, I’d probably want to do everything I could to protect myself, including avoiding outdoor activity.

There are a lot of options out there when it comes to home fitness equipment, and given the social dynamics that we have today in the US, there’s a good chance that people of color will be considering those options. Peloton has a pretty good chance of being viewed as the choice of the black community if they can do some co-branding with Beyonce, et al.

Not just traffic enforcement though. Riding a bike puts a person in a very vulnerable position. You could be cruising along and not know you’re being followed.

There’s a bike club in town called Ladies Let’s Ride and they celebrate the freedom that early lady cyclists enjoyed. So I wonder how that contrasts for lady cyclists.

In general, this is a big issue for bike adoption. Beyond the white male crowd that is.

“Peleton blew up in popularity because most people don’t feel safe cycling outside.”

I would argue that there have been stationary bikes in existence for decades, not to mention spinning classes, both of which provide the opportunity to cycle safely indoors. My feeling is that the popularity of Peleton is due to the technology of their bikes that allows for in-home spinning classes, which coincided with a pandemic.

Seems to me the whole article is a bit odd, if you go read Peloton’s financial materials their whole story is positioning themselves as a competitor vs. other subscription-based fitness stuff such as spin classes, Yoga studios, etc… I think it is a little odd to act like Peloton users are likely to have gone for a bike ride in other situations. They are sort of apples to oranges.

I heard an interview over the weekend talking about the changes in Paris. The person they were talking to (who lived just outside the city) complained that the changes have made the capital more elitist: it has long been too expensive to live in the city, and visiting was now more difficult.

I offer this without judgement, but it is perhaps an alternative take on “social redistribution”, and should prompt some thinking about who really benefits when we undertake big changes in urban structure.

They do address this in the article:

It seems the issue that car drivers face is that free car infrastructure can’t distinguish between wealthy people and poor people. If we give away free space for cars, we’re giving handouts to the wealthy. I’m not sure how we help out the rural poor, other than providing cheap, frequent public transit with park and rides. As they note in the article, most of these people already take public transit to access the city.

My experiences in Paris make me think that making it less car oriented will greatly benefit the current residents (those with the wealth to live there) by making the city a more pleasant place to live, “rich male drivers” not withstanding.

But for the less wealthy around the city, cars provide access they would not otherwise have (I doubt the interviewer managed to find the only person who felt driving was their only reasonable access). Perhaps they are just part of the collateral damage of “progress”.

I hope their experiment succeeds.

Thanks. Fixed it. Here’s the link https://www.thebulwark.com/all-roads-lead-to-roads/

The peloton article feels like it was copy pasted from a peloton press release.