Oregon House bill would prohibit tolling on I-205 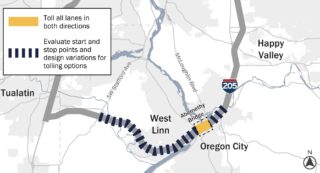 A group of seven lawmakers want to rewrite existing law and prevent the Oregon Department of Transportation from establishing a tolling system on Interstate 205, unless all the funds to go widening the freeway.

When the Oregon Legislature passed House Bill 2017 (“Keep Oregon Moving”) in 2017 they directed the Oregon Transportation Commission (OTC, the advisory body the oversees the Oregon Department of Transportation) to create a tolling program and implement it on I-5 and I-205. Now several years into the project, lawmakers want to put an end to it. House Bill 2629 would expressly prohibit the OTC from tolling I-205, “unless the toll is used to pay for construction of additional lanes.”


ODOT is mandated by HB 2017 that any funds raised through tolling must go into a Congestion Relief Fund; but that fund isn’t limited to adding lanes on freeways. The Oregon Constitution says revenues from motor vehicle taxes and fees are to be spent on “roadway” projects which can legally include not just highway and driving projects, but infrastructure for bicycling, walking, or transit service.

ODOT wrapped up a major public comment period on the I-205 tolling project in mid-December of 2020 that found, “A majority of respondents across all demographic groups expressed strong opposition.” In a statement from the agency, Toll Program Director Lucinda Broussard said, “Clearly there is more work to do. The comments we received from the community demonstrate the confusion around this type of tolling, which makes sense considering this has never been done before in Oregon.”

Following the release the public opinion report, outgoing Gladstone City Councilor Neal Reisner wrote an op-ed in the Portland Tribune where he urged people to contact legislators and tell them to stop the I-205 tolling project. He claimed ODOT has a, “spending problem, not a revenue problem” and that tolling is a, “scheme to force people out of their cars and into public transportation”.

Barring the passage of this bill (which is unlikely given the strong Democratic majority in the legislature), ODOT is set to make a decision on which tolling alternative to implement and finish the federal environmental analysis process in 2022. If all goes according to plan the system should be collecting tolls by 2026. Learn more on ODOT’s website.

Given how conservative Oregon Democrats are on highway policy (i.e, Rose Quarter expansion, raising speed limits to 75), I’d say there is a very high probability of a statewide toll ban like other states have done, during the next legislative session.

With the members of the legislature who are sponsoring this bill, it will be dead on arrival. If you want to kill a bill in 2021 get Mike Nearman to sign on. And Mark Meadows, the one democrat tried to change the Speaker so I don’t see him as having lots of political capital to throw around.

The rose quarter expansion was packaged in with tolling. If there were a bill that got rid of both I could see Democrats supporting it. But this proposal seems very challenged indeed.

The rule of thumb is you add tolling when you add a new toll road or toll bridge. The logic being; citizens will accept a toll road or a toll bridge over no road or no bridge. But, add tolls to existing infrastructure? Good luck with that…

Maybe if it were called a “premium subscription” (for reduced congestion)?

The reason we have cigarette taxes is not because we first polled smokers about how they felt about his idea, but because we understand that exacting a financial penalty for engaging in actions that have harmful societal effects is smart: it discourages the behavior and raises funds with which to counteract those harms.
Arthur Pigou figured this out one hundred years ago. https://en.wikipedia.org/wiki/Pigovian_tax

Just want to say…. Welcome back to the discussion 9watts!

completely? Do we have tool roads in Oregon?

“Tool roads”; love the typo! But there are currently none, according to Wikipedia.

Going off my sketchy memory reading about the history of it: The Interstate Bridge had a toll to pay off the bonds that funded it. Then did again when they built the second bridge. Both times, the tolls were discontinued when the debts were paid for. Does that count as a toll road in Oregon? ¯\_(ツ)_/¯

The Bridge of the Gods in Cascade Locks requires a toll for everything but foot and bicycle travel. Does that count? Again, technically a road between states.

The Camas Ferry? Not a “road” by definition, but it is a transportation connection and requires a toll to make that connection.

I do wonder what the plan is for the newer Tacoma Narrows bridge tolls; is it the same plan or are they taking a Bay Area CalTrans approach? The Bay Area bridge tolls pay for both the maintenance of the current bridges, but also subsidize other transportation systems (such as BART). The Golden Gate Bridge is managed by its own special transportation agency made up of Marin and San Francisco Counties (and maybe Sonoma?) that maintains the bridge and subsidizes bus and ferry services that serve the transportation district.

Add the Hood River Bridge to the same category as the Bridge of the Gods. Tolled, but between states. It’s definitely a gray area.

Isn’t the Bridge of the Gods privately owned, not government?

Guest
You know who...

Bwahaha… everybody wants to toll I-5 which is another form of bias and racism. If you only toll I-5, everybody will drive on 205 and more congestion. Toll the whole network or nothing at all is equity. Ask the red house occupiers maybe consider occupying the ramps I5->//Skidmore to Rosa Parks// Shut those ramps down and you will get rid of congestion. ❤️

Racist against what exactly?

Most of these lawmakers don’t live anywhere near Portland, and Mike Nearman is a criminal.

Did someone seriously spend money polling people on whether they’d be willing pay tolls, even for congestion management? Other than policy wonks who’ve studied it, I doubt the idea floats anyone’s boat. I think it’s the only way this region solves congestion, provided the revenue goes toward transportation equity with regard to transportation mode and income.

Well right now do not feel safe taking public transit due to the pandemic so I sometimes use I-205 to get to work. Hopefully next year public transit will be safe to take again.

I say don’t bother with more lanes and I don’t want there to be a toll road. If I-205 is tolled looks like I’ll take surface streets when getting tacos from Rigobertos or find some other place. Newberg and Wilsonville have some decent choices.

Vote Up0Vote Down  Reply
« The Monday Roundup: Car culture at the insurrection, Parisian dreams, NTSB on bikes, and more
A closer look at SW Barbur Blvd and why we need to stay focused on making it better »