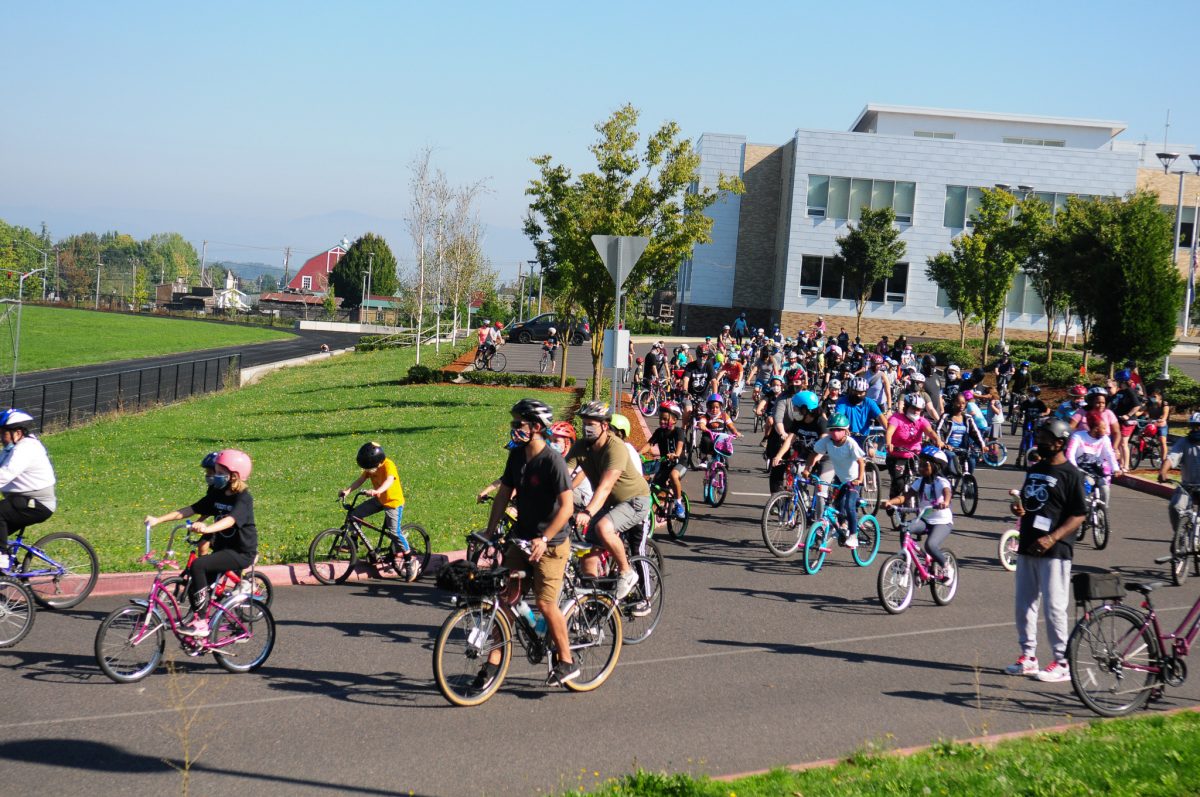 When the pandemic hit, there were more kids and families cycling on Portland streets than at any time I can remember (outside organized events like Sunday Parkways). So it makes sense that local school leaders want to tap into the amazing power of bicycles to start this strange year off right.

In the past week, principals from two public schools in Portland have hosted bike rides as a way to build community in a time when Covid-19 restrictions make personal connections difficult.

I chatted with the principal of Prescott Elementary in northeast Portland on Saturday and I’ve contacted the principal of Astor K-8 in the University Park neighborhood of north Portland to learn more about how bicycling is playing a role in their communities.

‘Taking up space’ in the streets

“We often see cycling as a white-centered, white male-centric field, and I need our young people to know that it belongs to you, in the different ways that you make it yours.” 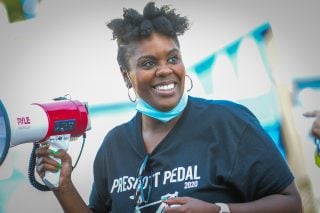 When I met Nichole Watson back in June at the Black Girls Do Bike ride, I didn’t know she’d become a school principal. Turns out she’s brought the same energy and cycling-centric organizing to her new leadership role.

The Prescott Pedal event brought together the school community in a big way on Saturday. A huge crowd of students, parents and school staff buzzed around the playground prior to the ride. The Community Cycling Center was busy fitting people onto loaner bikes (which were in such high demand they ran out!) and there was a food cart, free bike repair, and a bike decorating station.

“I am your proud new principal of Prescott,” Watson said into the megaphone to the assembled crowd. “I cannot wait to ride with you. I know this is a start of the year that feels abnormal. But what we’re doing today is building community, we’re having fun, and we’re taking up space!”

I caught up with Watson on the ride a few minutes later and asked to explain what she means by “taking up space” in this context.

“We talk a lot about leadership, and I need our kids in this political climate, to know that they can take up space; but I’ve got to demonstrate what that looks like,” Watson said. “When we see people who look like us doing the things we dream to do, we get permission. So representation matters… Transportation is a right for us to be able to move about our cities, but we often see cycling as a white-centered, white male-centric field, and I need our young people to know that it belongs to you, in the different ways that you make it yours.”

Watson was speaking about the need to connect kids to cycling not just as a transportation mode (boring), but as a conduit for expression and culture that can give them a sense of belonging and confidence. She wants her students to see understand this “duality” of cycling. “I want them to be able to know that you can have both and that there’s a way that you can use transportation to get from A-to-B. But then there’s a way that you get to create community on your bike with your crew. That’s a different kind of ride. This is a different kind of ride. We’re not riding for transportation, we’re riding to intentionally take up space — and that they both can exist in cycling.”

Watson has noticed over the years when the City of Portland and advocacy organizations come into her community to “teach cycling” the message doesn’t get through. “I started to think, why are they not doing well? It’s because they’re presenting it in a way where they can’t connect.” She turned to YouTube and social media for inspiration and “found a whole new world” of #BikeLife culture that’s she says is missing from Safe Routes to School curriculum.

“I remembered that as a kid, my pegs in the back and somebody’s sitting on my handlebars or doing wheelies with my brother’s BMX bike, and I thought, where did that part of the culture go? It still exists, it’s just underground,” she said. “And I want it to be mainstream. And I care that there’s space for my students to show up authentically.”

“For me, this is how I’m choosing to take up space. Right now. It’s on my bike. I love being on my bike,” she continued. “And we need to just social distance, but we also needed to take the edge off… And people need it to come back together to remember beloved community so that we can see it represented in each other.”

As we biked through the neighborhood it felt a little like Sunday Parkways. Some people walked, some scooted, and overall there was a “beautiful bouquet of colors and ages” represented (noted Watson).

One little girl was tipping over and barely able to ride straight. “She’s riding!” Watson shrieked with glee. “She’s learning how to ride on this ride!” Turns out she typically rides with training wheels but couldn’t get a loaner bike with a set and she didn’t want to be left behind. And so, according to Watson, “The community just said, ‘Well, we’ll ride with her.'”

Listen and read-along to a portion of this conversation here. 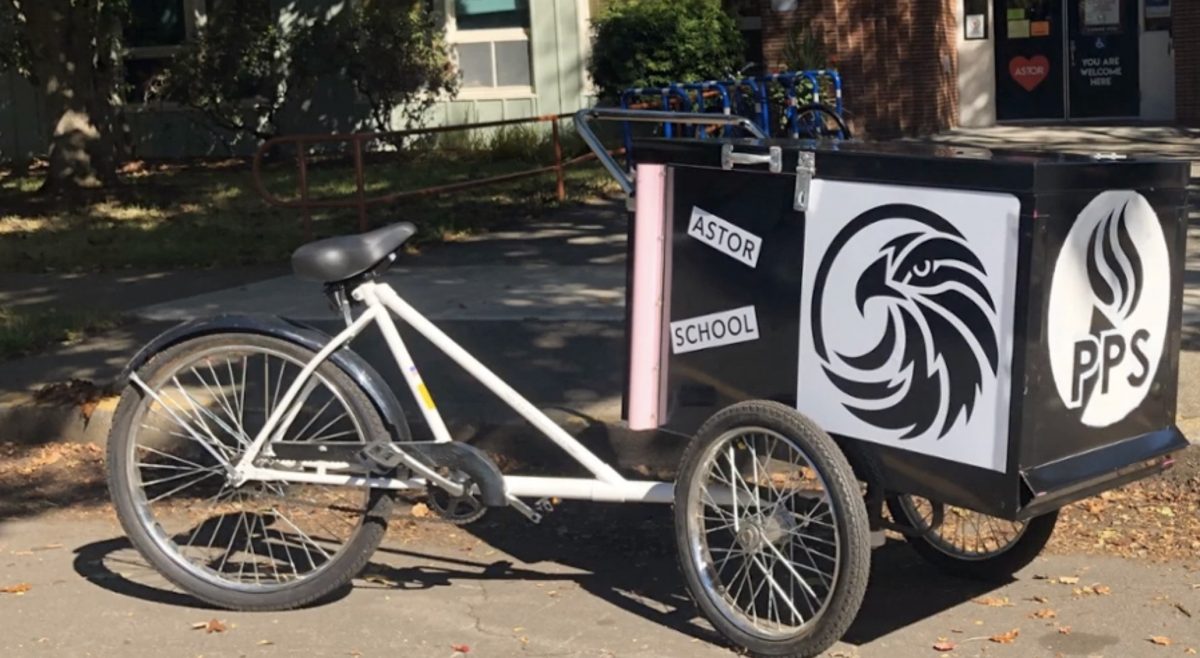 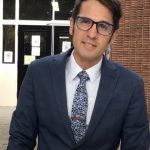 Astor K-8 School Principal Blake Robertson says the idea for a bike parade sprang from necessity. Astor teachers organized the first one this past spring and the second one took place last Thursday. “When the shutdown happened, teachers wanted to find a way to continue connecting with students and families, even if it was from a distance,” he shared with BikePortland via email.

To add to the fun, Robertson shared a teaser video (below) for the recent parade on his YouTube channel that featured the “Astor Parade Bike”, a tadpole cargo trike emblazoned with the Portland Public Schools and Astor logos. The cargo bin is full of Astor school merchandise to pass out to students.

The bike was donated to PPS by Lyft (the parent company of Biketown operator Motivate, Inc.). The bike lives at Astor, but Robertson says any school is welcome to use it.

As for last week’s bike parade, it was a big success. “Kids love seeing their teachers, especially in this distance learning format. The kindergarten teachers got their students to flap their arms like wings when the parade arrived in order for us to cheer for them,” Robertson said.

“I hope to keep this parade event for the years to come,” he added. “It’s a great way for us to celebrate our students and our community.”

To know that cycling is making even deeper inroads into many Portlanders’ lives is a wonderful silver lining of these anxious times. Keep it up Portland!

This is fantastic and I’m so happy for the Prescott School community.

As a parent we offered and tried to initiate something like this at my kid’s school, but the principal killed it by replying that district Covid-19 standards said our max limit was ten people, as any events bigger than that were prohibited. I felt super frustrated but tried to be understanding. Now I’m just back to frustrated.

Again, this is great for Prescott. It’s just lousy that so much depends on individual principals and their willingness to be bike awesome.

Did you tell the principal that other principals have interpreted the rule differently? We are having a similar but different issue at our middle school. Keep the pressure on!

So heartening to see kids and adults of all stripes fostering community on bikes. The best hope we have for sustainable world is to teach our children mindfulness in living. Thanks for sharing.